What makes the bond between gay men and straight women so special, so necessary, and SO fabulous? Sheena Janson and Max Wojtanowicz, who grew up together in the St. Cloud area, present their critically-acclaimed love letter to friendship, which features music by Michael Gruber. The show premiered at the 2012 Minnesota Fringe Festival and was expanded at the Illusion’s Fresh Ink Series.

Industry Night on Monday, March 30 at 7 pm
– Pay What You Can tickets 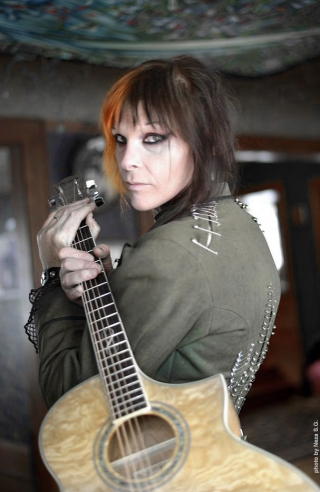 Performed by Venus de Mars with special guest Jim Walsh of the Mad Ripple Hootenany
After being forced into an extended musical-career break while navigating and finally winning an extended Minnesota Department of Revenue audit battle concerning artist-as-business versus artist-as-hobby status, having survived a stress-related near-heart attack resulting in two heart stents, then with nothing released since her 2011 full-band “10 BONES” album, Venus has finally returned to her punk-glam work.

First: by accepting an invite to tour with Laura Jane Grace and “Against Me!” during August 2014. Second: by making the decision to release her first solo acoustic album with a new release – “Flesh and Wire” produced by NY based Barb Morrison (Debbie Harry; Rufus Wainwright; Scissor Sisters, etc.)

[sws_blue_box box_size=”100″] Details
Date: Sunday, April 5. Doors at 7pm, show at 8pm
Location: Bryant Lake Bowl
Admission: $10/$8 in advance
For more information, visit Bryant Lake Bowl[/sws_blue_box]
The Column is a community-supported non-profit news, arts, and media organization. We depend on community support to continue the work of solid LGBT-centric journalism. If you like this article, consider visiting Give MN to make a contribution today.