The Column’s Spotlight on the Arts features artists and organizations that have had an impact on the arts in Minnesota. If you are an artist or arts organization and would like to be profiled in our Spotlight, simply fill out our introductory form. 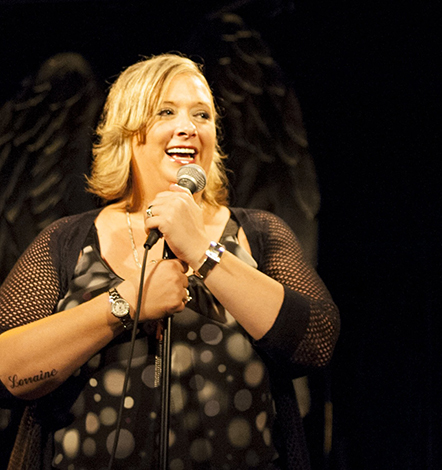 Sarah McPeck is a lesbian comic, improv teacher, and is the recent recipient of Lavender Magazine’s 2014 Community Involvement Award. The Column interviewed McPeck about her craft and how comedy is important to the LGBT community.

When did you get your start in performance and comedy?
Officially, four years ago, on a whim I signed up for a comedy contest. However, I would say my comedy career officially started in 2001, when I got hired to be a blackjack dealer. I was terrible at first, because math and I are not very good friends, so I had to learn how to charm my way through it. Gamblers… talk about a tough crowd.

Describe your style of performance?
Storytelling for sure. I can’t write a one liner to save my life, occasionally I get out a good, “That’s what she said joke.” I really try to think of my audience as people I know. I try to evoke familiarity, I want people to get to know me, exactly how I really am, scars and all. I think everyone is interesting, everyone has a story to tell. I’m a trained improvisational actor and I always try to challenge my self to go off script, interact with the audience. I also love song and often my little ditties make an appearance in my set.

Who are some of your influences?
Margaret Cho, Jane Lynch, Lily Tomlin, Bette Midler and Kathleen Madigan. Locally, Lauren Anderson and Jill Bernard. Lauren Anderson is a main stage actress at The Brave New Workshop and I saw her perform when I was still dealing blackjack in 2009. I was couldn’t take my eyes off of her and not just because she’s a beautiful lady. She is one of the smartest, talented, engaging women in comedy today. It was watching her live performance that made me believe, I could do that too. A year later, I signed up for improv and she was one of my first teachers. Jill Bernard, co founder of HUGE theater also was a huge influence on me. She helped me to know that no matter if I bomb, I did something right by getting up their in the first place. She also showed me the importance of being kind and supportive to others.

What is your artistic process?
There’s a lot of coffee involved. My favorite time to write is in the morning, with nothing but a pot of coffee and my insecurities to guide me. I find things funny all the time and I try to write them down as I think of them. Smart phones are the best. Once a week, I sit down and and go through them and try to write bits. I usually just write like a bat out of hell, then let it sit. A day or two, I’ll go back and re work it. My biggest advice is to read your writing out loud. I might embellish a few details, but for the most part I tell real stories from my life and my real thoughts and observations. I think there is so much funny that just happens, that making up stories, isn’t necessary. I am constantly saying to myself, “I couldn’t make this stuff up, if I wanted to!” I also try to see as much live performance as possible, not necessarily just comedy. I love live shows.

How is comedy an important form of art for queer/LGBT communities?
Comedy is an amazing tool for queer/LGBT communities because simply, it brings people together. For a few moments, we are able to sit and laugh with our fellow man and realize we aren’t alone. It is also a way to talk about polarizing or difficult subjects in a way that brings a new perspective, often a much needed perspective. For far too long, our community has been silenced by fear or hate or unfair laws. It is important that we can find joy, laughter, happiness. Laughter is truly the best medicine.

Personally, it was important to me that I am out as a lesbian and brand myself as a lesbian comic. It was the right fit for me, because for one, I am so proud of myself. I was in my early thirties when I came out and it feels so good, not to be afraid to be me. I hope that my visibility can help others to feel they aren’t alone. Some people have criticized me and said that it will be harder if your labeled as “the gay comic”. To that, I’d say, I simply don’t care. This is me, this is the stuff I talk about, if your not into it, cool.

I present stories that encourage the audience to reflect on their own personal biases and why they have them. We are a society that has become apathetic to inequality. We have become a nation of people who think “it’s someone else’s problem” or that at least things are “much better than they used to be”. I want to remind people that the fight is not over. However, I’m never opposed to a good dick joke.

From where (whom or what) do you draw your inspiration?
Everywhere! Life is funny! I am inspired by beauty and I believe beauty can be found most anywhere, if you know how to find it.

Are there venues for LGBT women comics in the Twin Cities?
There aren’t any lesbian comedy clubs intown, but boy if there was, I’d be there every night! The Twin Cities is blessed with a huge comedy scene, so there are great places to perform all over. The best place for a female comic to meet other like minded people and to perform, is the “Outspoken” open mic, at “The Fox Egg Art Gallery” in Minneapolis, on the second Wednesday of every month. The best people in the world are there. Talk about supportive. It is a far cry from some other rooms, where the cool kids sit in the back and no one makes a move to welcome you.

You hosted some improv classes in 2014. Is that something you will continue in 2015? And if so, how do people get involved?
Yes! The great people at Muffin Top Cafe, have partnered with me and allow me to teach in the community room. The classes run for six weeks and are complimentary. There is a small waiting list and you need to register with me. Please contact me at: sarahmcpeckcomedy@gmail.com. People of all levels are encouraged to come! It is a great way to meet people and make wonderful friends and learn a skill that can be used to improve literally anything. Let’s build stronger communities! It was important to me to offer free classes, because when I started, I was super broke and the Brave New Workshop worked with me so that the classes could be available to me. Money is tight, improv is awesome, without sounding cheesy, I want to pay it forward. Besides, I absolutely love teaching. It is truly one of my favorite things in the world, so it is hardly a hardship for me. Classes starting from 7-9 PM, Thursdays, 1/8/15-2/13/15. They do run through out the year.

Do you have any upcoming performances?
I am currently in rehearsal for my new one woman show and I am in final production of Q. Two years ago, I looked around the queer Twin Cities art scene and was amazed at all the talent that most people didn’t even know about, so I decided to make a documentary. I am currently in final production for Q, a documentary featuring queer performers who live and perform in the Twin Cities. I organized the production crew, made up off 100% volunteers, who have banded together to help make this documentary. I am proud of myself for believing in my idea and for figuring out how to do something I had never done before.

Find me online at www.sarahmcpeck.com

You can also get a sampling of McPeck’s comedy here: