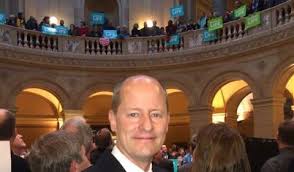 In an update to constituents on Wednesday evening, Sen. Paul Gazelka, a Republican from Brainerd, announced he planned on introducing a bill that would allow businesses to discriminate against same-sex couples.

Another very important issue will be addressing the Freedom of Conscience Act and working with key Democrats and Republicans to protect the rights of Minnesotans who would otherwise be forced, against their religious beliefs, to provide services for same-sex marriages. In Morrison County last year a small business owner was asked to provide services for a marriage and reception for a same-sex-couple and because it violated religious principals they deeply believe in they couldn’t in good conscience provide services to support the ceremony. As a result they were threatened with a lawsuit in which they settled by having to pay for the couple’s ceremony, reception and honeymoon. Their only alternative for exercising their rights were to risk losing the lawsuit as well as their business. I’ve always believed it’s important to respect others beliefs but we must also acknowledge and support the rights of everyone, regardless of whether or not we agree.

Gazelka also said he had concerns about equity for transgender students in high school athletics:

On a related note, the Minnesota State High School League voted in December on a policy change regarding transgender students. An initial proposal MSHSL was considering was to allow private facilities such as bathrooms and locker rooms to be accessed by opposite-sex students. Though what was passed in December is a less intrusive policy than the original, does MSHSL really expect a biological male student who identifies as female, and his family, to acquiesce to the student being permitted to play on the girls basketball team on Thursday night, but not be permitted to access that team’s locker rooms after the game, or the female bathrooms when he returns to school on Friday morning? As a direct result, the new transgender policy poses serious concerns regarding privacy rights, and compromises fairness in athletic competition as well.