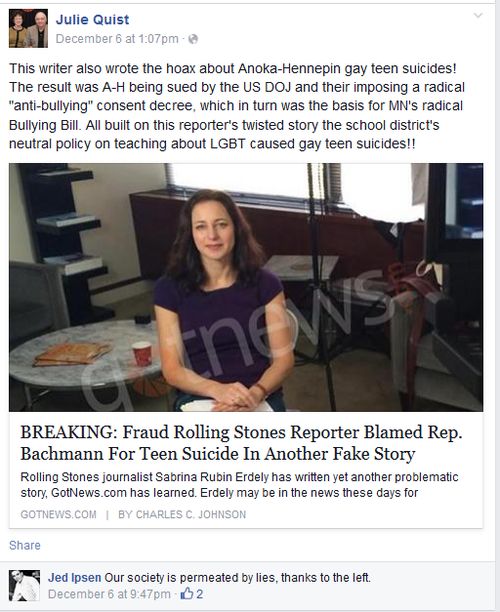 According to posts on Facebook by Child Protection League board member Julie Quist, a February 2012 Rolling Stone story by Sabrina Rubin Erdely–author of an recently discredited story about rape on campus–led to the Anoka-Hennepin public schools “being sued by the US DOJ and their imposing a radical ‘anti-bullying’ consent decree. . .”

Moreover, Mrs. Quist shares material that implies Erdely’s February 2012 articles invented the connection between the school district’s location in Michele Bachmann’s congressional district, noting that “It’s all built on falsehoods. The truth matters to us.”

This writer also wrote the hoax about Anoka-Hennepin gay teen suicides! The result was A-H being sued by the US DOJ and their imposing a radical “anti-bullying” consent decree, which in turn was the basis for MN’s radical Bullying Bill. All built on this reporter’s twisted story the school district’s neutral policy on teaching about LGBT caused gay teen suicides!!

However, a review of online sources and the Nexis All News database reveals that attributing either the consent decree or the connection of Bachmann to the lawsuit to the February 2012 Rolling Stone article is a bit of a stretch, while claiming that “this writer” invented the “hoax” is complete nonsense. 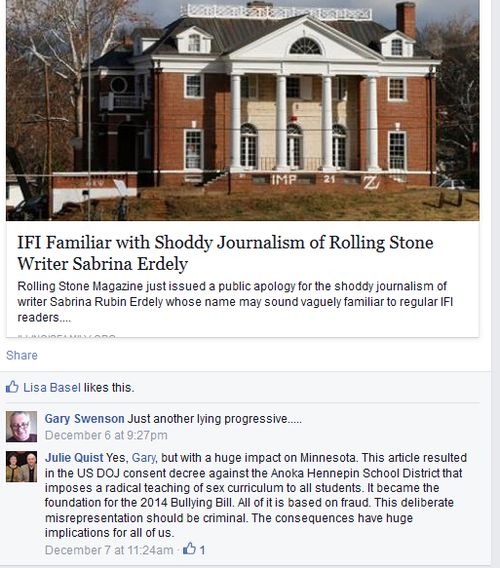 First, the Southern Poverty Law Center’s “Case Docket” page about the lawsuit notes that the “SPLC filed the lawsuit after attempts to reach a solution with school officials failed” on July 21, 2011. According to the consent decree itself (pdf here), the Department of Justice:

Following its investigation of the complaint it received, the United States began settlement discussions with the District prior to the commencement of the Student Plaintiffs’ lawsuit. After Student Plaintiffs filed their lawsuit and pursuant to the Court’s request, the United States joined the settlement negotiations of the Student Plaintiffs and the District in an attempt to resolve the complaints and avoid protracted litigation. These negotiations resulted in the agreement of the parties as set forth in this Consent Decree

Other sources note that the DOJ investigation began in 2010.

Nor was the story broken by Rolling Stone in February 2012. In fact, the lawsuit and the location of the school district in Bachmann’s turf were reported long before Rolling Stone published its Johnny-Come-Lately article. 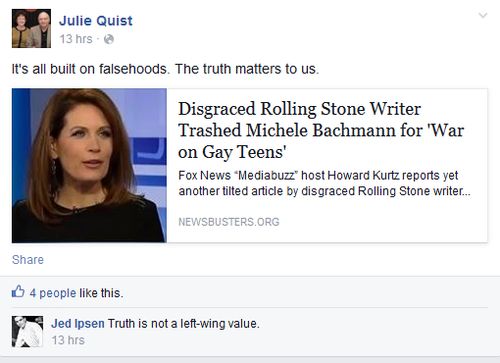 The lawsuit was extensively covered in the national and state media. Moreover, in a widely syndicated column from October 2011, Anti-gay bullying: Does silence = death?, Charles Haynes of the First Amendment Center observed:

For a case study of how this fight plays out on the local level, consider the current debate in Anoka-Hennepin School District, Minnesota’s largest school system (which gets national media attention partly because much of it is in Michele Bachmann’s congressional district).

Although Anoka-Hennepin school officials claim to be taking measures to stop bullying, six students filed suit in July charging that the district has failed to address persistent and widespread harassment of GLBT students. The U.S. Department of Justice is also investigating complaints about anti-gay bullying that allegedly goes unchecked by district staff.

Eight students in the district have committed suicide in the past two years — at least four of them reportedly struggled with issues of sexual identity.

All of the elements of the story–including the perception of the Bachmann location–were in play by October 2011, long before Rolling Stone “discovered” the story in February of 2012.

In its current issue, Rolling Stone magazine becomes the latest big-name national media outlet to come down hard on the gay-bullying problem in the Anoka-Hennepin school district.

In “School of Hate: One Town’s War on Gay Teens” reporter Sabrina Rubin Erdely writes about the plight of gay students in Michele Bachmann’s home district, joining past scrutinizing reports from Mother Jones and The New York Times. . . .

Minnesota Public Radio first reported about the looming lawsuit on July 20, 2011 in Gay rights groups: Change Anoka-Hennepin policy or we won’t rule out lawsuit. The DOJ investigation and talks are mentioned in the lede:

The Anoka-Hennepin school district said Wednesday it will keep its sexual orientation curriculum policy but is offering to work with civil rights organizations and U.S. Department of Justice officials to develop more employee training to support gay, lesbian, bisexual and transgender students.

But two groups threatening to sue the district over its policy said they are still considering legal action, saying the promise of training isn’t enough. . . .

Federal officials are investigating allegations of student bullying based on sexual orientation in the Anoka-Hennepin School District.

The north metro school district, the state’s largest, acknowledged Wednesday that the U.S. departments of Justice and Education launched their investigation in November. In a statement, the district said it is having “collaborative discussions” with federal authorities to provide additional staff and student training on gay, lesbian, bisexual and transgender (GLBT) issues.

“We want to make positive improvements,” district spokesman Brett Johnson said. “Their goals and our goals are aligned: We want to keep kids safe.”

It has been a year of public scrutiny for the district over its handling of GLBT issues, much of it focused on the district’s sexual orientation curriculum policy, commonly called the neutrality policy. . . .

Federal authorities are investigating “incidents involving harassment and bullying” in Minnesota’s largest school district, the U.S. Department of Justice confirmed in an e-mail to CNN.

The civil rights investigation is under way in the suburban Minneapolis school district, Anoka-Hennepin, a community already embattled in a culture war over homosexuality in the classroom.

The Justice Department together with the Department of Education’s Office of Civil Rights are looking into “allegations of harassment and discrimination in the Anoka-Hennepin School District based on sex, including peer-on-peer harassment based on not conforming to gender stereotypes,” according to a district memo provided exclusively to CNN. . . .

An editor’s note now at the top of the CNN report adds:

Editor’s note: For a full investigation into the Anoka-Hennepin student suicides, watch “CNN Presents” on Saturday, July 30, at 8 p.m. ET.

In a Mother Jones piece a couple of days later. Stephanie Mencimer reported in The Teen Suicide Epidemic in Michele Bachmann’s District on July 25, 2011 (six months before the Rolling Stone “hoax”):

The first was TJ. Then came Samantha, Aaron, Nick, and Kevin. Over the past two years, a total of nine teenagers have committed suicide in a Minnesota school district represented by Rep. Michele Bachmann—the latest in May—and many more students have attempted to take their lives. State public health officials have labeled the area a “suicide contagion area” because of the unusually high death rate.

Some of the victims were gay, or perceived to be by their classmates, and many were reportedly bullied. And the anti-gay activists who are some of the congresswoman’s closest allies stand accused of blocking an effective response to the crisis and fostering a climate of intolerance that allowed bullying to flourish. Bachmann, meanwhile, has been uncharacteristically silent on the tragic deaths that have roiled her district—including the high school that she attended. . . .

And that’s just the lede.

In July, the Southern Poverty Law Center followed through on a longstanding threat to sue the district over the neutrality policy. The federal lawsuit was filed on behalf of five district students who claimed they were subject to harassment. Several complained of being physically attacked, while others were told to “kill themselves.”

CNN jumped on the story, noting that the Department of Justice had launched a civil investigation into the claims that the “no homo promo” policy illegally discriminated against gay kids. Earlier this month, the New York Times profiled several kids from the SPLC lawsuit.

Other than all of that coverage and commentary from 2011, perhaps Julie Quist and the conservative news sources she’s posting on to something in posting that the consent decree was the result of “hoax” dreamed up months later.

Screengrabs: Julie Quist and her commenters think they’re totally on to something about falsehoods.