In a recent exchange with WCCO’s Esme Murphy, Interview: Rep. Daudt On How Republicans Retook The House, the new speaker-elect downplayed the role of campaigning against same-sex marriage:

He also spoke about the party’s opposition to gay marriage playing a role in the winning of seats in rural Minnesota. But he said it was unlikely Republicans would seek to reverse the gay marriage law in an upcoming legislative session.

Word comes to Bluestem Prairie Minnesota Representative-elect Tim Miller is exchanging in rants about reproductive rights and same-sex marriage in caucus meetings. We don’t have any details, but the broad outline of what we’re hearing suggests that Miller’s priorities aren’t far from those discussed in an exchange between former Big Stone County Chair Jack Whitley and representative-elect Jeff Backer.

What are Miller’s views on equality? 2012 edition

Like Backer, Miller campaigned on his opponent’s vote for marriage equality. Miller’s views about same-sex marriage appear to originate in his idiosyncratic views on “equal rights.”

. . . I aspire to be like Lincoln. I want you to understand that I believe this line [that all men are created equal], and as it pertains to homosexuals, I believe them to be created equal to me. I want only the best for my gay friends, neighbors, and citizens.

Had Miller stopped there, he’d seem quite open-minded. But sadly no: he continues:

However, where we MAY differ, is the definition of “equal”. I believe in equal opportunities but not mecessarily equal rights.

Well then. Miller goes on:

We as a country afford certain rights not always given to all. Some laws are meant to promote specific benefits to society. For example, farmers are given certain tax incentives not afforded to other businesses. My belief that marriage between one man and one woman is a protected class is in no way an indictment on homosexual people. It has nothing to do with letting people who love each other be together. I have no interest in “outlawing” homosexuality. I believe as much as possible we should be allowed to live the lives we want. I just believe the word “marriage” as a legal term should be narrowly defined.

Miller wrote earlier in the same letter that he supported “civil union related legislation to afford gay partners cerain legal rights not afforded to them at this time such as estate planning or living wills.”

That was 2012, and as the 2014 election neared, Miller’s rhetoric grew less concilatory about LGBT people’s aspirations for wedded bliss.

What are Miller’s views on equality? 2013 edition

In a letter published in the Clara City Herald the week after the Minnesota House voted to permit same-sex marriage, Miller was less generous about LGBT people, writing:

The gay marriage law will not only redefine the oldest of institutions in society but it will cause sweeping changes for other laws already on the books. It will also define how we can or cannot go about our day’s business. The amendment to exclude churches and “other religious organizations” from acting against their religious beliefs does not included businesses or individuals who choose not to support this decision. Furthermore, public education will now adapt to a neutral position on the subject, which in effect, endorses the lifestyle.

Never mind that Minnesota’s equal protection law already prevented private businesses that offer public services and accomodations from discriminating against GLBT people. And Miller’s 2012 best wishes for the happiness of his gay friends? Gone with the wind.

What are Miller’s views on equality? 2014 edition

The gloves came off Miller’s rhetoric in the 2014 campaign. Like Backer after the election, Miller claimed that the concern about the issue was something that came up at the doors, rather than topic he pushed. In How the GOP took the Minnesota House, MPR reporter Catherine Richert reported:

But Miller said social issues ended up being a bigger issue in his district. Falk was among those who voted to legalize same-sex marriage, and voters were concerned about that, Miller said.

“The general issue at the door was, ‘Where do you stand on the same-sex issue?’ and ‘Our representative did not listen to us,'” Miller said.

Indeed, the Minnesota Family Council, which was a leading opponent of legalizing same-sex marriage, said victories like Miller’s were a referendum on liberal marriage and abortion rights policies.

But Miller himself was the one bringing it up. According the January 22, 2014 West Central Tribune article, Miller seeks Republican party nod for re-match with Falk, the issue was included in Miller’s initial press release announcing the rematch:

Miller took on Falk over spending by state government and his vote for marriage equality in the release. He charged that “By holding the majority in both the House and Senate Governor Dayton and the Democrats ran rampant with tax increases and needless spending.’’

He called Falk’s vote for the marriage equality act “arrogant,’’ stating that over 60 percent of his district was opposed to the act.

There’s one of his radio ads, in which he called Falk’s vote for marriage equality “a slap in the face” of the district:

And here’s the doorknocking/lit piece:

As much as Miller claimed in the 2012 letter to respect “homosexuals,” on his personal Facebook page, Miller likes two pages kept by Glenn Gruenhagen’s “ex-gay” friend Kevin Petersen. There’s the 130-fan Pro Family Forum (an organization Petersen founded with Representative Gruenhagen as the Pro-Marriage Amendment Forum) and Change Therapy Works, a page with 100 fans that’s dedicated to defeating HF 1906/SF1727, bills that would have banned therapy intended to change the affectional identity of children under 18.

It’s no surprise that neither Facebook page has oodles of fans. As Andy Birkey noted in MN group founded by lawmaker creates bizarre anti-gay video claiming HIV is transmitted in sweat, the science in a DVD that the Pro-Marriage Amendment Forum/Pro-Family Forum created was pretty sketchy stuff. In our post Gruenhagen’s campaign chair & candidate for HD47 circulates awful DVD about anti-bullying bill, Bluestem had looked earlier at the political conspiracies contained in the video on the disk.

As for the notion that “Change Therapy Works,” Newsweek took a long look at the issue in Never Scared Straight in May, noting:

In 2009, the American Psychological Association (APA) put together a comprehensive report that looked at all of the peer-reviewed literature on conversion therapy and concluded that the evidence shows such efforts don’t work. The APA urged all ethical practitioners to avoid any form of conversion therapy, and that’s fundamentally what all the relevant professional medical organizations say: The American Academy of Pediatrics, the American Medical Association, the American Psychiatric Association, the World Health Organization and the National Association of Social Workers all have stated unequivocally that any attempt to change sexual orientation is ineffective.

All those organizations also say conversion therapy is unethical because it puts the brains of kids through a wood chipper. “It’s malice disguised as medicine,” says Wayne Besen, who runs the nonprofit organization Truth Wins Out.

Though the exact numbers have been hard to pin down, the literature clearly shows that lesbian, gay and bisexual adolescents and adults are at higher risk for mental health problems than their peers. But conversion therapy patients are in a much higher risk category. A well-publicized San Francisco State University study found they are three times more likely than their homosexual peers who hadn’t attempted therapy to suppress their sexuality to use illegal drugs, six times more likely to report high levels of depression, and eight times more likely to attempt suicide. Their fears—of upsetting their parents, their friends, their religious community and even their therapists—can be all-consuming.

Here’s a screenshot of Miller’s Facebook page likes, showing his likes of both pages: 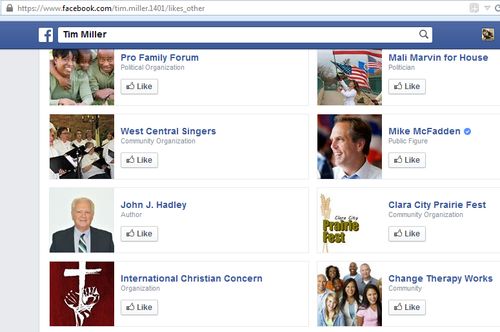 Miller’s allies at the Freedom Club State PAC sent at least one mail piece attacking Falk for “destroying our families:

But Andrew Falk turned his back on our values and voted in support of legalizing gay marriage.

Falk’s vote set the stage to legalize gay marriage in Minnesota and put the foundation of our families at risk.

Here’s the inside of the mailer: 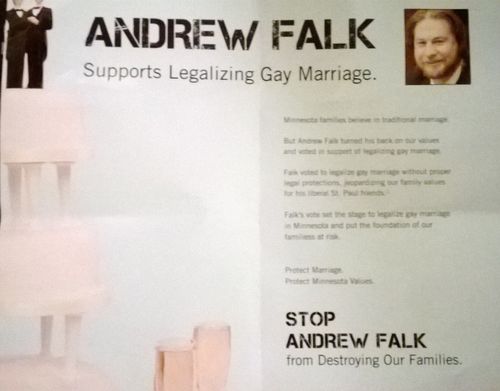 For himself, Miller converted the “St. Paul” references to questions about whether Falk, whose daughter is the six generation of his family to live in Swift County, resided at all in the district.

It comes as no surprise to hear stories filtering back about Miller’s priorities–and with them, it’s no surprise either that Miller isn’t one of the new legislators assigned a vice-chair of a committee, or that the first-term legislator assigned an “assistant majority leader” spot is Dave Baker of Willmar, in the “B” half of Senate District 17.