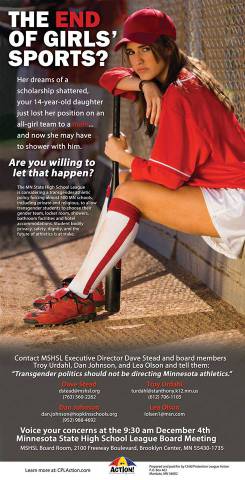 The Minnesota Child Protection League, a group that opposes LGBT rights, bought full-page ads in the Minneapolis Star Tribune as well as many regional papers on Sunday. It’s the second time the anti-LGBT group has taken out ads that suggest transgender youth are predators.

The ad says, “The End of Girls’ Sports? Her dreams of a scholarship shattered, your 14-year-old daughter just lost her position on an all-girl team to a male… and now she may have to shower with him. Are you willing to let that happen?”

The ad is in response to a policy being drafted by the Minnesota State High School League, a nonprofit membership organization for schools that sets policy for extracurricular activities, that would set a framework for eligibility for transgender students. The policy was originally slated to pass the MSHSL in early October but was tabled after the controversy surrounding the Child Protection League’s first ad placed in the Star Tribune in late September.

The MSHSL draft policy, however, does not force schools to do anything related to facilities. The policy leaves those decisions to the discretion of individual schools: “Every student athlete and fine arts participant should have access to a locker room, bathroom and shower facility in a safe, comfortable and convenient environment. Such arrangements must be fully considered by member schools to ensure such access and privacy.”

The rest of the policy provides a framework for how schools should handle eligibility for transgender students:

The written statement from the student and the student’s parent(s)/legal guardian(s) affirming the consistent and uniform gender-related identity and expression to which the student self-relates.

Statements from individuals such as, but not limited to parents, friends, and/or teachers, which affirm that the actions, attitudes, dress and manner demonstrate the student’s consistent or sincerely held gender-related identification and expression.

In addition to the Star Tribune, the Winona Daily News (owned by Lee Enterprises) published the ad. The St. Cloud Times, owned by Gannett, also ran the ad according to the paper’s editor.

Mankato, a home base of the anti's “@Josh_Moniz: I thought I'ld note my paper also ran the controversial ad pic.twitter.com/GJPBnEovoF”

The Duluth News Tribune also printed the ad, according to Bluestem Prairie.

The ad is the second one placed by the MNPLC in the last few months. On Sept. 28, the group took out a full-page ad in the Star Tribune insinuating that transgender students are sexual predators. MNCPL’s spokesperson, Michele Lentz, doubled down on that language in an interview with WorldNetDaily when she claimed that passage of the policy will result in rapes in locker rooms.

Minnesota’s Twitter users reacted to the ad on Sunday with a mix of humor and outrage:

@BluesnBaseball @dbrauer @StarTribune but she could cost our daughters a scholarship and then shower with them too!?! #ScareTactics