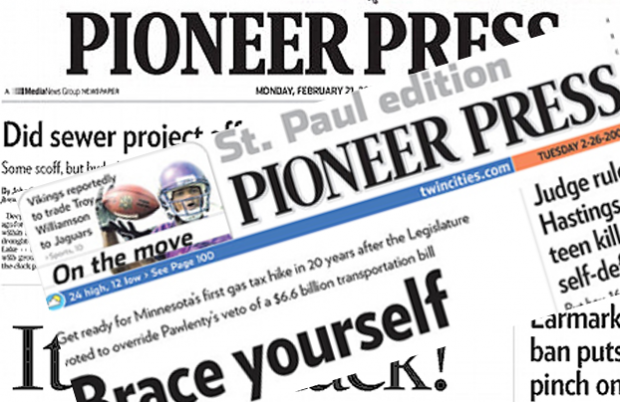 Over the last month, the St. Paul Pioneer Press has been running ads that claim American teenagers are being indoctrinated into homosexuality and that “sodomy” is dangerous.

The ads, which have been running in print and online in October state in part:

“It appears that it might not be politically correct for schools to teach that sodomy used to be a felony in all jurisdictions in America because of the serious health consequences. Therefore, it could be beneficial for teenagers to view Shocking 2010 CDC Update About Homosexuality on YouTube. Teenagers should be given a right to learn that there are valid health reasons to avoid sodomy.” 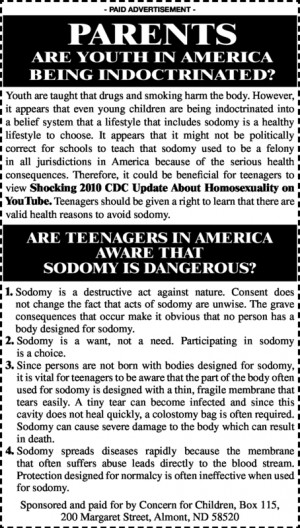 Here’s the online version which was spotted by Bluestem Prairie on Friday: 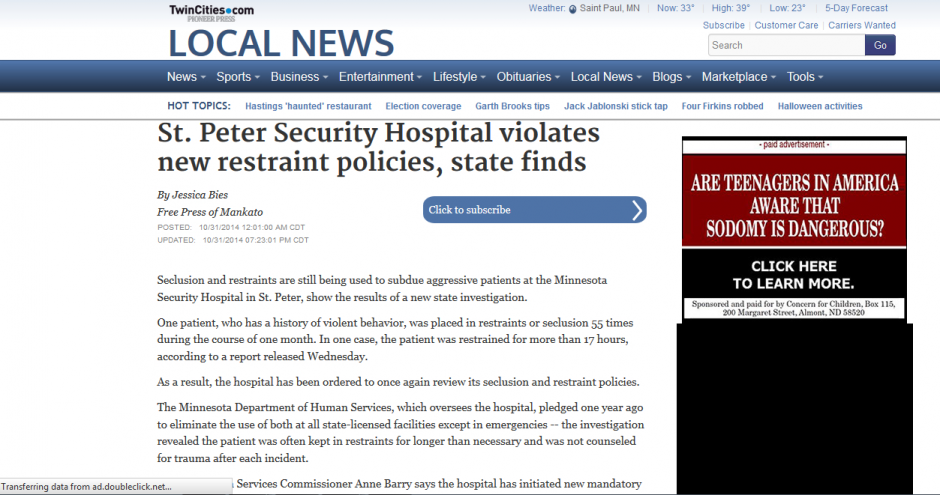 The ad was placed by an entity calling itself “Concern for Children” and listed an address of PO Box 115, 200 Margaret Street Almont, ND 58520. It’s not the first time Concern for Children has placed such ads either. The Pioneer Press ran a similar ad from them in late-2013. In 2012, the group ran ads in support of the anti-gay marriage amendment in papers all over Minnesota, Washington, Maryland, and Maine.

Who is “Concern for Children”?

In 2012, Minnpost’s Beth Hawkins attempted to track down the people behind Concern for Children with no success. That’s because the address the group is using (PO Box 115, 200 Margaret Street Almont, ND 58520) is fake. In a letter to the editor of the International Falls Journal, a resident of Almont, North Dakota explained:

In the Oct. 31 edition of The Journal, there was a paid article on page 13 of section B entitled: “Common sense says to vote yes on the Marriage Amendment.”
Regardless of how you voted on that amendment, you need to know that the person who wrote that article does not live in Almont, nor is there an organization called “Concern for Children” in our community.
It is an unknown and unregistered organization in North Dakota. You also need to know that the address that was used in the “signature” portion of the article is an empty church building in Almont that has no pastor and no congregation. It is a vacant address owned by an absentee individual. It was used solely as a vehicle to disseminate this radical information….
The ND attorney general has been contacted and a complaint has been filed with the Consumer Protection Agency for falsifying an organization and address.
I felt that you needed to know the facts of the matter. I also believe that if someone has that strong an opinion about something, they should have enough courage to sign their name to it.

It’s the second time in the last month that a major newspaper in Minnesota has published an ad that is anti-LGBT. In early October, the Star Tribune ran an ad by the Minnesota Child Protection League that insinuated that transgender youth are predators.

The Pioneer Press does not run every ad that is submitted, and has used its discretion even in the very recent past. In the 1960s, the Pioneer Press made the decision to stop running ads from white supremacy groups. In early September, Pioneer Press management rejected an ad from the Newspaper Guild, a newspaper union, while contract negotiations were underway.