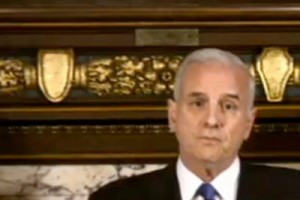 At a gubernatorial debate on Wednesday night, all three candidates for governor balked at directly answering whether transgender students should be included in high school ssports. Gov. Mark Dayton said that inclusion would be “problematic.”

The Minnesota State High School League is considering a new policy that would provide guidance to schools on the inclusion of transgender students in athletics. 32 states have some policy regarding transgender inclusion, but a transphobic full-page ad in the Star Tribune placed by the anti-LGBT group, Child Protection League, generated controversy and the issue was put off until the MSHSL’s December meeting.

At Wednesday night’s debate, the candidates were asked to weigh in on the issue.

According to the Huffington Post, Gov. Dayton said: “It’s a very complicated issue. Giving transgender students the choice of which team they want to play on is, I think, problematic.”

“I will tell you, as a dad of two teenaged boys, I don’t think it makes a lot of sense to have boys and girls in the same locker room.”

“I would also put it in the hands of the Minnesota State High School League. If there’s demonstrable harm, we can address that as it comes. But I put it in their responsibility.”

Forum Communications will be releasing video of the debate on Thursday afternoon. TheColu.mn will update this post when that video becomes available.

Here’s the Twitter reaction to the question this evening:

Q: Should transgender students be able to pick which sports teams they play on? A from all 3 candidates, in sum: No. #mngov

Johnson on high school transgender policy: As a dad, it doesn't make much sense to have boys and girls in the same locker room. #mngov

Update: Here’s the video and transcript of Wednesday night’s debate:

Moderator: the most common question by far asked about your stand on the proposed Minnesota State High School League policy which would allow transgender students to play on the gender team of their choice.

Mark Dayton: I think the high school league did the right thing by delaying it until they could give it further consideration. It’s a very complicated issue and giving transgender students the choice of which team they want to play on is problematic, so I think it was wise to take it back for further evaluation

Jeff Johnson: Well, in the end it’s the decision of the Minnesota State High School League and I appreciate that. I will tell you as a dad, I have two boys, I don’t think it makes sense to have boys and girls in the same locker room

Hannah Nicolette: I would also put it in the hands of the Minnesota State High School League. If there’s demonstrable harm then we can address that as it comes but I would put it in their responsibility. They’re the ones that deal with it in a hands on basis.