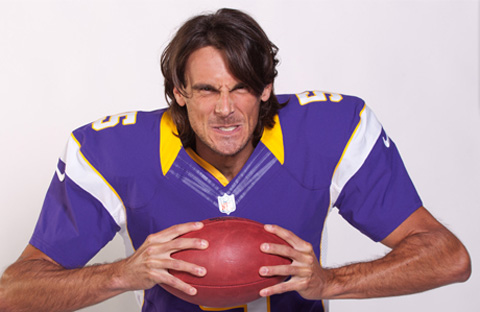 Late Friday afternoon, the Minnesota Vikings released excerpts from an investigation into homophobia in the NFL team after allegations were made by former punter Chris Kluwe. The excerpts confirm at least one allegation by Kluwe, while also reporting on controversial comments allegedly made by Kluwe.

In January, Kluwe made allegations of homophobia in the Vikings management, specifically, special teams coach Mike Prieffer. The Vikings launched an investigation that was completed earlier this summer, but when pressed, the Vikings refused to release details of the investigation’s findings. On Friday evening, the team released about 30 or the 150 pages in the report.

Think Progress noted that limited information coming from the Vikings:

The Vikings subsequently launched an independent investigation of the allegations. ESPN and other outlets reported that on Friday, the Vikings released a “summary of the report.” This is actually misleading. What the Vikings released was an analysis produced by the law firm representing the team on employment matters, which included some information from the actual 150-page independent report. (These are lawyers who are paid by the Vikings to limit their legal liability for any employment decisions that team makes.)

The report backed up at least one claim made by Kluwe:

On Jan. 2, Kluwe claimed in a post on Deadspin that special teams coach Mike Priefer made a particularly homophobic remark:

We were laughing over one of the recent articles I had written supporting same-sex marriage rights, and one of my teammates made a joking remark about me leading the Pride parade. As we sat down in our chairs, Mike Priefer, in one of the meanest voices I can ever recall hearing, said: ‘We should round up all the gays, send them to an island, and then nuke it until it glows.’ The room grew intensely quiet, and none of the players said a word for the rest of the meeting. The atmosphere was decidedly tense.

The Vikings report found that Priefer did make that statement:

As previously noted, Priefer did not deny that he might have made the statement that “We should round up all the gays, send them to an island, and then nuke it until it glows.” As such, Kluwe’s claim in this regard should be credited. However, no other witnesses recalled hearing Priefer make any other inappropriate statements, including Loeffler who acknowledged only hearing the single comment on the practice field. There was also very limited evidence supporting the existence of a hostile work environment based on sexual orientation or support of marriage equality.

Prieffer will be suspended for three games during the 2014 season which can be reduced if he attends sensitivity trainings. The Vikings will make a $100,000 donation to LGBT causes. In addition, all Vikings employees will take an annual sensitivity training.

Though Prieffer had orginally denied the “nuke the gays” comment, he apologized on Friday.

“I owe an apology to many people — the Wilf family, the Minnesota Vikings organization and fans, my family, the LGBT community, Chris Kluwe and anyone else that I offended with my insensitive remark,” he said. “I regret what has occurred and what I said. I am extremely sorry but I will learn from this situation and will work on educating others to create more tolerance and respect.”

Setting aside for now the search for a punchline in the sentiment that all gay men should be exiled to an island that is then detonated with a thermonuclear device, the Vikings have opted to give Priefer a pass on potential wrongdoing independent of the things he may have said in Kluwe’s presence. Some employers regard dishonesty in the context of an official investigation as grounds for immediate termination, and the facts as summarized in the memo support a finding that Priefer initially failed to tell the truth when under the impression that, as to the “nuke” remark, it was his word against Kluwe’s.
Given that the arguable falsehood was told while Priefer’s ongoing employment was in jeopardy following the firing of head coach Leslie Frazier and the uncertainty regarding his successor, it’s fair to wonder whether Priefer would have been retained by Mike Zimmer if Priefer had told the truth in January, instead of in May.

The report also evaluated other claims by Kluwe of homophobia in the Vikings management. The report indicated:

The investigation did not reveal any systemic or institutional problems with respect to
homophobic behavior within the Vikings organization. Many interviewees said that they did
not hear any intentionally derogatory or harassing comments toward gay individuals. Several, however, noted “insensitive” or “immature” comments, such as, the clothing someone was wearing “looks gay.”

The report also took a swipe at Kluwe, a point that commentators grabbed onto on Monday:

Kluwe also made fun of the Vikings’ then Head Strength and Conditioning Coach Tom Kanavy, an alumnus of‒and former coach at‒Penn State University, concerning the Jerry
Sandusky/Penn State situation. In his interview, Kanavy explained that Kluwe cut the seat out of his pants and then put them on to imitate a victim of the Penn State child-abuse scandal. According to Kanavy, Kluwe said that he was a “Penn State victim” and to “stay away” from him while his buttocks were exposed.

Minnesota Public Radio gave a run-down of the reactions to revelations of Kluwe’s jokes.

The Vikings have yet to release the full report of the investigation. Brad Michael, formerly the chair of Minnesotans For Equality, wrote in a piece for OutSports: “If our state’s anti-discrimination laws are to have any meaning, if the fight to end discrimination is to mean anything at all, if the NFL is serious about creating a welcoming environment for all players, then we must demand that the Vikings release the entire report and that they take serious steps to eliminate the type of behavior exhibited by Priefer.”

Here’s the limited report the Vikings released on Friday: