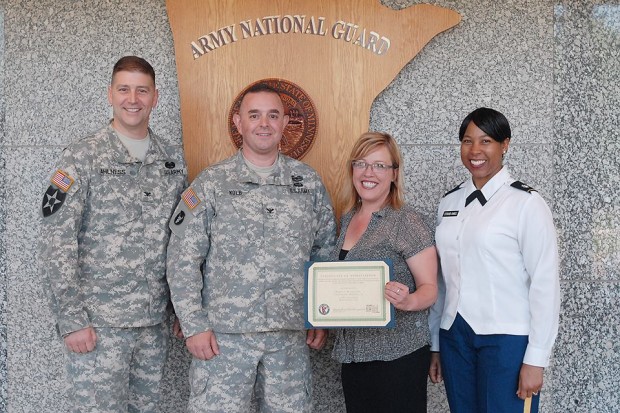 For the first time in its 164 year history, the Minnesota National Guard celebrated Pride month on Sunday.

The Guard celebrated Pride month with a presentation and discussion led by OutFront Minnesota’s Rebecca Waggoner, who is the group’s Anti-Violence Program Director. The discussion centered on diversity and equality in the military. It was held at the Cedar Street Armory.

Col. John Kolb, Minnesota National Guard Chief of Staff, said in a statement, “This is a really important day and we have an opportunity now to look at inclusion. Twenty-seven years ago, I never imagined that I would have a commander, at the adjutant general level, saying that this is a definite priority across the state.”

He added, “I know many gay and lesbian Soldiers that I’ve served with over parts of my career. They were tremendous Soldiers, they served proudly, but they were stifled by a policy that was unfair to their individuality.”

Maj. Gen. Richard C. Nash, Minnesota National Guard adjutant general, added, “We are committed to fostering an environment that truly represents the demographics of the communities in which we serve. We must reflect those whom we lead, serve and protect.”

Planning for the Pride month activities began in 2013.

Guards in New York, Washington, DC, and California have had similar celebrations.

Photo credit: MN National Guard. “The Minnesota National Guard celebrated Pride Month Sunday with a presentation by Rebecca Waggoner (2nd from right), the Anti-Violence Program Director for OutFront Minnesota. OutFront Minnesota’s mission is to create a state where lesbian, gay, bisexual and transgender people are free to be who they are, love who they love and live without fear of violence, harrassment or discrimination. The observance highlights the Minnesota National Guard’s commitment to increasing diversity and inclusion within its ranks.”

Here’s the flier for the event: 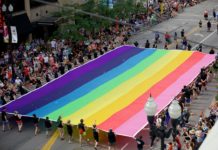 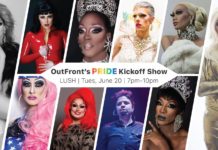