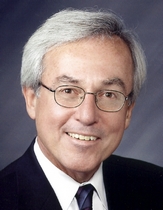 Former Rep. Steve Smith, a Republican from Mound, has passed away at the age of 64. He was one of a handful of Republicans to vote against an anti-marriage amendment in 2011.

In a 2011 interview with Minnpost, Smith said his vote against the amendment was the right thing to do. “Up until I was 30,” Smith said, “I was a Democrat. I’m one of those Reagan Democrats who became a Republican.”

According to the Star Tribune:

Smith was 64 and had served two decades in the Legislature before losing in a 2012 primary. Ryan Smith said in a statement Monday that the cause of his father’s death is pending. But Smith says his father had battled alcoholism and become “increasingly despondent and unresponsive to calls from family and friends.”

Smith, who was running for his 12th term in 2012 was unseated by Cindy Pugh, a Tea Party activist who opposes LGBT rights.