A look back through the years

Most people have heard of the saucy gal from down under Dame Edna Everage better known simply as Dame Edna, created by Barry Humphries.  Humphries created the character in the 1960’swho has played her to world stages periodically until he retired the character last year.  The popularity of Humphries’ Dame Edna has become legendary over the years as she has starred in movies, television, stage and even for Prince Charles and the Duchess of Cornwall at the 2013 Royal Variety Performance.

As is the case with any true iconic artifact like a Chippendale camelback couch, the attraction doesn’t change even if it has been re-stuffed.  Actor Michael L. Walters created a brilliant impersonation of the original character and continues to bring his Dame Edna to venues throughout the land, and is bringing his show to Camp Cabaret and lounge in St. Paul this April.  Let us be clear that Walters is approved by, but not affiliated with Barry Humphries, but wow!  What a great job with the impersonation. 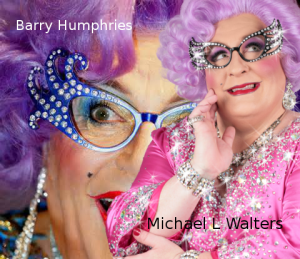 Having entertained so many loyal fans at sold out stages for decades, I am certain there are many who wondered how long Humphries could keep up the pace before abdicating her throne in the kingdom of comedy.  Well, unlike Queen Elizabeth II who was born eight years before Humphries and is still going strong with no signs of stepping down,  Dame Edna (the original) went on her final farewell tour last year.  Over the years she went from frumpy to fabulous right in front of the generations that have known her for her quick wit and blazing improvisation.  But even lights must dim on a single actor playing a beloved character so Walters’ Dame decided to go on with his show. Much like Betty Crocker changed over the years, the differences originally may seem significant, but fade as time passes.  I am sure Walters will continue to entertain people with a grand impression of the saucy character we’ve all come to recognize by colorful, hair, stylish dresses and glamorous glasses.

The gallery below are photos of Walters’ Dame Edna

Dame is best known for adoring gladioli and calling her peeps Possums, whereby I prefer Hibiscus and call my followers Muffins.  Make no mistake about it though, when we are in front of an audience both of us can bring out the laughs.  If you decide to venture out to catch her show, you had best hurry and get your tickets early as she is sure to sell out.

Stay tuned into TheColu.mn next week as I put up a podcast interview with the old gal herself.  If you go to the show don’t forget to bring Dame a gladiola (or twelve)!

Love and Peace Muffins!  See you at Camp.