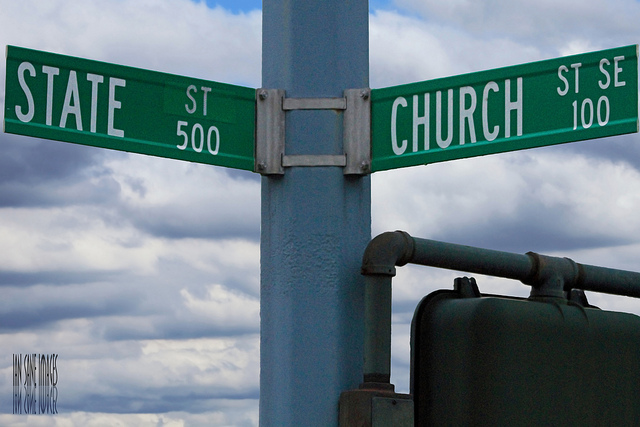 While states like Arizona and Kansas advance ‘religious freedom’ bills to allow businesses to discriminate against LGBT people, a Minnesota group is hosting a rally on the topic on Monday.

A new religious group, Light for Freedom, will be hosting a Rally for Religious Freedom at the Minnesota Capitol on Monday from 2 to 3pm.

Light for Freedom says it will “We will educate, empower, and call to action people of faith and goodwill to defend our U.S. religious liberty.”

Conservatives at the Minnesota Legislature are already signaling a desire to put forward a bill that would “make it clear businesses owned by people who oppose such [same-sex] marriages are not required to service gay weddings,” Bluestem Prairie reports.

On its website, the group says, “Light For Freedom is a non-partisan Call-To-Action group to help protect our religious freedom. Everyone concerned about the threat to our religious liberties is welcome to join. United we are one; united we are strong!”

The group got its start in the Church of St. Paul parish of the Roman Catholic Church. It’s been getting the attention of the Archdiocese whose paper, Catholic Spirit, did a piece on the group earlier in February.

Planning to show their support at the rally are members of Colorado’s Little Sisters of the Poor, the group of nuns that recently received an injunction from the U.S. Supreme Court regarding a mandate in the Affordable Care Act that would require them to provide their employees with insurance coverage for contraception, violating the teachings of their faith.
“I just felt that the fact that they could be present there would speak so clearly to everyone about what we’re really doing, and how threatened we are,” said St. Paul parishioner and Light for Freedom member Sharon Balk. “To have these beautiful Little Sisters who care for elderly people who can’t afford care . . . I mean, there’s a visual of why we need to be passionate about this and what’s at risk for us.”

According to the paper, the groups members raised the flap over Phil Robertson of “Duck Dynasty” and the recent legalization of marriage equality as examples of loss of religious liberty.

“We’re being censored in the public square,” said parishioner Pat Moore according to the Catholic Spirit. “It starts with religion, but it’s pervasive.”

“These people here have taken an initiative . . . and they heard the call and wanted to respond,” Father Tim Norris, pastor at the Church of St. Paul, told the paper. “I am certainly here to guide them and support them. They can do so much more than I can do here.”

The group has delved into many issues it deems threats to religious liberty. On its Facebook page, the group’s most visible presence, the group has spoken out against marriage equality, the Employment Nondiscrimination Act, the and the Affordable Care Act’s contraceptive mandate, among others.

The group had a kickoff event last fall which drew about a hundred people, including Sen. Michelle Benson (the co-founder of the group, Jeffery Bartels, is Benson’s campaign tresurer).

On Monday, the rally will feature speakers who have been staples in the opposition to LGBT equality. Autumn Leva of the Minnesota Family Council and Jason Atkins of the Minnesota Catholic Conference were the primary spokespeople for the anti-gay marriage amendment and against marriage equality in 2013.

John Tolo, the director of the SafeCity Project in St. Paul will speak. He was featured by the Associated Press during the marriage equality debate:

The president’s stand contradicts the lessons of his own experience, said Tolo, recalling his own drug use and multiple sexual relationships after his parents divorced and, more recently, his work in a poor part of St. Paul.
Tolo said that, while he supports the idea of some kind of legal recognition for same-sex couples, marriage is a sacred template for raising and caring for children as God intended. For government to try to broaden marriage risks undermining that, while infringing on the rights of Christians to define their own institutions.

Tolo is (or was) also associated with the Trinity Works ministry in Minneapolis which confronts LGBT people outside of LGBT establishments to urge them to repent. A while back, Tolo and Trinity Works discussed a plan to rent the Gay 90s. One member of Trinity Works recalled a discussion with Tolo following a vision from God:

in the second vision i was with a team of consecrated messengers and we went into a well known gay night club called the Gay 90s. I had been to this place before i was saved. i
went up to the DJ and asked for the microphone which he gave me. i then shared the gospel and asked anyone who wanted to turn to God and begin a relationship to leave the club and come with us. a group of people at the club then left with us and gave their lives to Jesus.
I shared this vision with John Tolo and as we were talking the Holy Spirit fell upon us and gave us an instruction to rent out the Gay 90s and have a worship and prayer night there.

Another speaker on Monday will be Gary Borgendale, a longtime opponent of LGBT equality

Borgendale was Local Ministry Director for KKMS, a conservative Christian radio station. Before that, Borgendale was the executive director and lobbyist for Minnesota for Marriage, a group that pushed for a constitutional amendment banning gay marriage on the ballot in 2012.

Borgendale was an alternate delegate for John McCain at the 2008 Republican National Convention in St. Paul. He says he backed McCain because of his opposition to same-sex marriage.

Before his support for McCain, Borgendale was the chair of Minnesotans for Huckabee and conducted outreach to home-schooling families. In 2005, Borgendale organized the “Minnesota Pastors’ Summit,” an event that made headlines in 2011 for its connection to Michele Bachmann.

Her husband, Marcus Bachmann, gave a presentation called “The Truth About the Homosexual Agenda.”

“As pastors, you are on the forefront of this cultural conflict. Activist judges, political leaders and secular media are trying to dictate faith’s role in society. However, we can reverse that trend through a unified commitment to biblical principles in our communities,” Borgendale said. “Same-sex marriage, civil or otherwise, does not extend the right to marriage to other individuals, it fundamentally redefines marriage for everyone.”

Beyond marriage, Borgendale has been outspoken against the LGBT community. In a July 2007 interview (MP3) with KKMS (where he would later become an employee), he said, “The homosexual agenda issue is not going away by any means.” He added, “There’s an effort to put this in the public school settings even down to kindergarten. The agenda being pushed whether it be the business community the public schools or even the church.”

He said that same-sex marriage would lead to polygamy and pedophilia.

“It is a slippery slope because polygamy is now very high on the radar screen. You have what is this show ‘Big Love,’ there was this polygamy rally,” he said. “There’s also moves about lowering the age of consent, there’s different pedophile organizations that are moving forward on that same regard — NAMBLA — it is there so that slippery slope is really coming forth.”

He said that he also opposes any relationship recognition for same-sex couples including civil unions and domestic partnership benefits.

“Civil unions and domestic partnerships starts creating a legal status,” he said. “We want to stay away from anything that creates a legal status. The opposition has tried very hard to create that beachhead by creating the establishment of some relationship that is (sic) recognized.”

He said, instead, that same-sex couples could have access to “a list of 8 to 10 items” such as survivor benefits so long as it was open to everyone including “life-long friends or siblings.”

He was a speaker at several stops on theNational Organization for Marriage’s Summer for Marriage tour in 2010.

“For my family and my children, I had to get involved,” he told a small crowd in St. Cloud. “One person can make a difference. If God is calling you, be involved. Answer the call.” 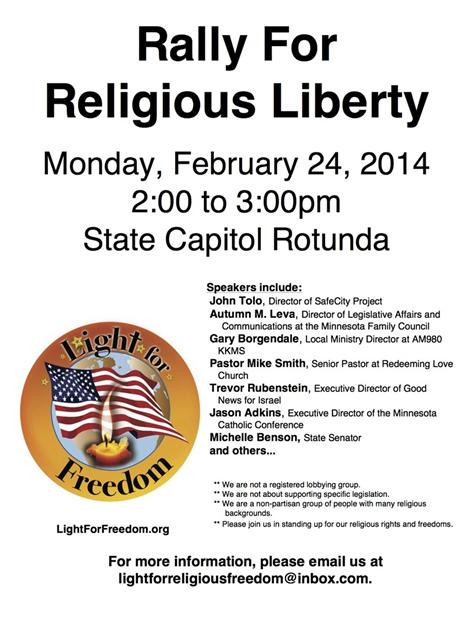