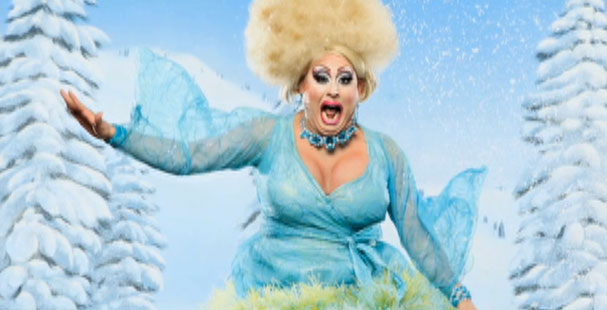 Two-time RuPaul’s Drag Race contestant Mimi Imfurst will be performing at the Saloon on Feb. 27.

Mimi Imfurst was loved and hated by Drag Race fans. After being the third to be eliminated on season three after lifting India Ferrah, Imfurst got a second shot at the drag race crown in RuPaul’s All Stars Drag Race but was bumped first after she and partner Pandora Boxx failed to mesh as a team.

But, despite losses on the drag queen reality TV scene, Imfurst has been stirring up controversy for at least a decade. In 2010, the Feast of Fun podcast interviewed Imfurst and revealed her more political side:

In 2005, the Catholic Advocacy Coalition named New York City drag queen Mimi Imfurst one of the top ten anti-Catholic people because of her hilarious Christmas show in which she portrays Jesus’ mother Mary as a 2,000 year old sassy diva. She beat out George W. Bush to come in second on the list and resulting in over 600 people protesting her show in New York City’s Times Square.

Feast of Fun also notes that Imfurst had a rocky start:

As a teenager, Braden Chapman was left homeless by his homophobic family and forced to work the mean streets of Portland, Maine to survive. Thankfully, a generous lesbian couple adopted Brenden to help him get through the tough time and helps him realize anything in life is possible.

Mimi Imfurst will be at the Saloon on Feb. 27 performing and DJing

[sws_blue_box box_size=”100″] Details
Location: Saloon, 830 Hennepin Ave, Minneapolis, MN 55403
Date: Feb. 27, doors open at 9pm
Admission: $5 cover, 18+ (college ID’s will not be accepted for cover) [/sws_blue_box]
The Column is a community-supported non-profit news, arts, and media organization. We depend on community support to continue the work of solid LGBT-centric journalism. If you like this article, consider visiting Give MN to make a contribution today.