If you are looking for something queer to do this week and weekend, there’s no shortage of great events.

More about Venus:
Venus de Mars is best known as the iconic leader of the long standing Minneapolis dark-glam/trans band: “Venus de Mars & All The Pretty Horses.” A band which Venus formed in the early 90’s, and has continued with since.

But s/he is also known in the arts community as a performance artist. S/he is both a former McKnight Multidisciplinary Artist Support, and Bush Artist Support fellowship recipient, as well as one of the core artist from the now defunct 1980’s era “Rifle Sport Alternative Art Gallery,” which was formerly located on Minneapolis’ infamous “E-Block.”
Throughout he/r musical career and touring schedule, Venus has kept up with all he/r other art disciplines, including these many ball-point pen notebook drawings which have become a kind of life journal for he/r.

“They’re kind of a collection of emotional self portraitures,” s/he says of them. “The central subject is most often a trans-person. non-gender or racial specific, with imagery taken from actual life events which happened to me during the time of the drawings and I usually include dream imagery which also occurred during the same time periods.”

The formality of these drawings were modeled after trips overseas when Venus came across old religious icon art in various European art museums and Church tours.
“I love the symbolism of that old art form, and thought I could bring the style into my own work. Since then, it’s become a kind of style-template for me. Something to build my 2-dimensional imagery with.”
These intricate and fragile ball point pen drawings have occasionally become the inspiration for Venus’ large 8-foot by 10-foot oil or acrylic paintings. 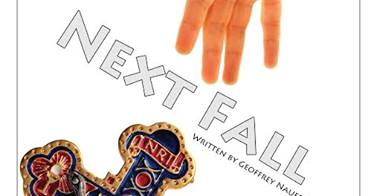 [sws_yellow_box box_size=”100″]Beginning Thursday, Feb. 20, Son of Peter Productions is offering Next Fall, a play by Geoffrey Nauffts. The show starts at 7:30 pm at Teatro Zuccone in Duluth. The show runs until Mar. 1. [/sws_yellow_box]

Son of Peter Productions presents its first official 2 act play. Performed for 2 weekends at the one and only Teatro Zuccone here in Duluth, MN.

“The funniest heartbreaker in town! NEXT FALL embodies something theatergoers have been sorely missing, perhaps without knowing it, for years. A smart, sensitive, immensely appealing and utterly contemporary New York comedy.” —NY Times. “Five Stars. Thebest new American play of the Broadway season, NEXT FALL leaves you thinking about rapture and rupture. If you go, which you should, be prepared to laugh some, perhaps to cry some, and then to rise in appreciation.” —Time Out NY. “Compassionate, laugh-filled and enormously entertaining. Geoffrey Nauffts invests the play with a generosity that doesn’t prejudge, embracing both the virtues and foibles of his characters. And that inclusion makes NEXT FALL an even richer experience.” —Associated Press. “A daring new drama.” —Entertainment Weekly. “Deeply moving and surprisingly funny. Geoffrey Nauffts reveals a talent for sharp comic dialogue. He draws all his characters with surprising depth.” —Hollywood Reporter.

THE STORY: Geoffrey Nauffts’ NEXT FALL takes a witty and provocative look at faith, commitment and unconditional love. While the play’s central story focuses on the five-year relationship between Adam and Luke, NEXT FALL goes beyond a typical love story. This timely and compelling new American play forces us all to examine what it means to “believe” and what it might cost us not to. 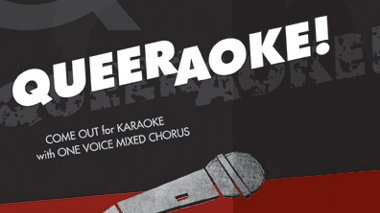 “One Voice Mixed Chorus unites gay, lesbian, bisexual, transgender people and straight allies to build community and create social change by raising our voices in song. As the largest GLBT chorus in North America, One Voice is known for its musical excellence, diverse programming, and deep commitment to community outreach.“

Queeraoke is open to anyone who wants to karaoke with the chorus.