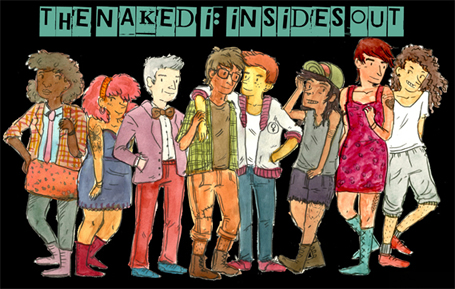 The 20% Theatre Company Twin Cities is producing “The Naked I: Insides Out,” a the 3rd production of its kind that the company has produced. “The Naked I” consists of “plays that explore queer and trans* experiences through monologues, short scenes, and spoken word poems.”

The 20% Theatre Company, formed in 2006, “is committed to supporting and vigorously promoting the work of female and transgender theatre artists, and celebrating the unique contribution of these artists to social justice and human rights.”

The company’s first run of “The Naked I: Monologues From Beyond The Binary” in 2009 was sold out.

The company is also featuring interviews with the performers on its blog where they’ve shared their experiences of “The Naked I.”

“I saw the first show The Naked I, and was deeply moved by the honesty shared on the stage,” says Andrea Jenkins. “It featured trans and queer performers, and the audience was amazing. Coming from a transgender experience myself it was a beautiful thing to watch our collective voice take the stage.”

Valencia McMurray said, “I saw The Naked I: Wide Open at my school winter 2012, I believe. I also participated in the workshop that was held. I’ve never seen or heard of anything like The Naked I and I definitely fell in love. When I heard there was a new show happening, I had to audition and bring my Spoken Word background into the picture.”

“My contribution to this production is as a playwright, which seems strange to say because I never considered myself to be one,” said Leslie Lagerstrom. “I wrote a story about our experience raising a transgender child and I was honored and thrilled to have it chosen to be part of The Naked I: Insides Out.”

The production will run Feb. 13-23. Here are the dates and times:

The company says: “On Brown Paper Tickets, we have included 5 different price-points, but if you would rather pay a different amount and/or pay in person, please make a reservation by emailing tickets@tctwentypercent.org.”

The company also notes: “ALL TICKETS ARE WILL-CALL. In a sell-out situation, tickets not claimed 5 minutes before showtime may be released to people on the waiting list. The past two NAKED I productions have SOLD OUT completely – so reserve or buy early, and COME EARLY!!”