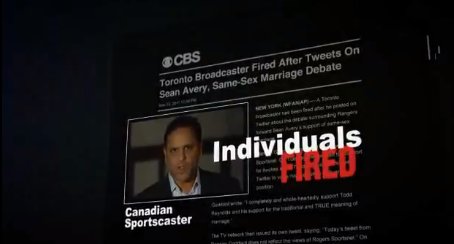 A new ad released last week by Minnesota for Marriage has been ruled misleading by both WCCO and Minnesota Public Radio.

The examples in Minnesota for Marriage’s ad have some truth to them, but some are misleading. And over all, the ad misleads voters on several fronts.

That said, amendment supporters are quick to point out that some legislators would like to make it legal and there’s a case pending in state courts that seeks to overturn the existing law. Supporters say that the amendment is necessary to keep legalization from happening and to prevent a rash of discrimination cases.

As for the rest of the ad, the examples involving lawsuits and fines could have been brought regardless of the state’s same-sex marriage laws. In fact, Minnesota’s anti-discrimination laws already prohibit discrimination based on sexual orientation.

But the ad is deceptive.

“When same sex marriage was imposed elsewhere, it has not been live and let live,” says the ad, by Minnesota for Marriage. “People who believe marriage is one man and one woman have faced consequences.”

What the ad asserts is not the question Minnesota’s voting on. Minnesota voters will be asked to put into the Constitution an amendment defining marriage as the union of one man and one woman.

Even though gay marriage is already illegal in Minnesota. Putting it in the constitution would make it MORE illegal.

And if Minnesotans reject the amendment, gay marriage will still be illegal.

Michelangelo Signorile interviewed Frank Schubert, the architect of Minnesota for Marriage’s media campaign, and asked him about his use of misleading ads in Maine in 2009 to defeat marriage equality.