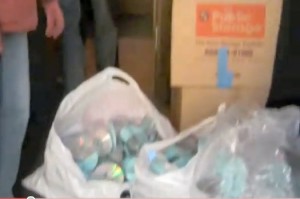 Catholics returned over 4,000 anti-gay marriage DVDs to the Archdiocese of St. Paul and Minneapolis on Friday. The DVDs are part of a mailing coordinated by Archbishop John Nienstedt, were produced by the Knight of Columbus and were distributed to 400,000 Catholics just before the 2010 election. The ReturnTheDVD project as well as artist Lucinda Naylor collected the DVDs and presented them to Archdiocese staff.

Naylor created an art project out of DVDs that were sent to her by Catholics offended by Nienstedt’s anti-marriage equality message. She lost her lost her position as an in-residence artist at the Basilica in Minneapolis because of her art project. Called “The Wave,” Naylor chopped her project up in to smaller pieces to donate to charity and used the excess DVDs to return to the Archbishop.

“After taking down my large DVD sculpture “The Wave”, I turned many of the altered DVDs into small sculptures,” Naylor said. “A baker’s dozen of these sculptures were donated to the GLBTQ on-line high school for fundraising purposes. Another was given to All God’s Children MC Church. Still others found homes with various project supporters.”

Naylor gave about a thousand back to the Archdiocese and ReturnTheDVD gave about 3,000.

Here’s a brief video clip of the return of the DVDs: