A Different Kind of Intimacy Comes to the Walker 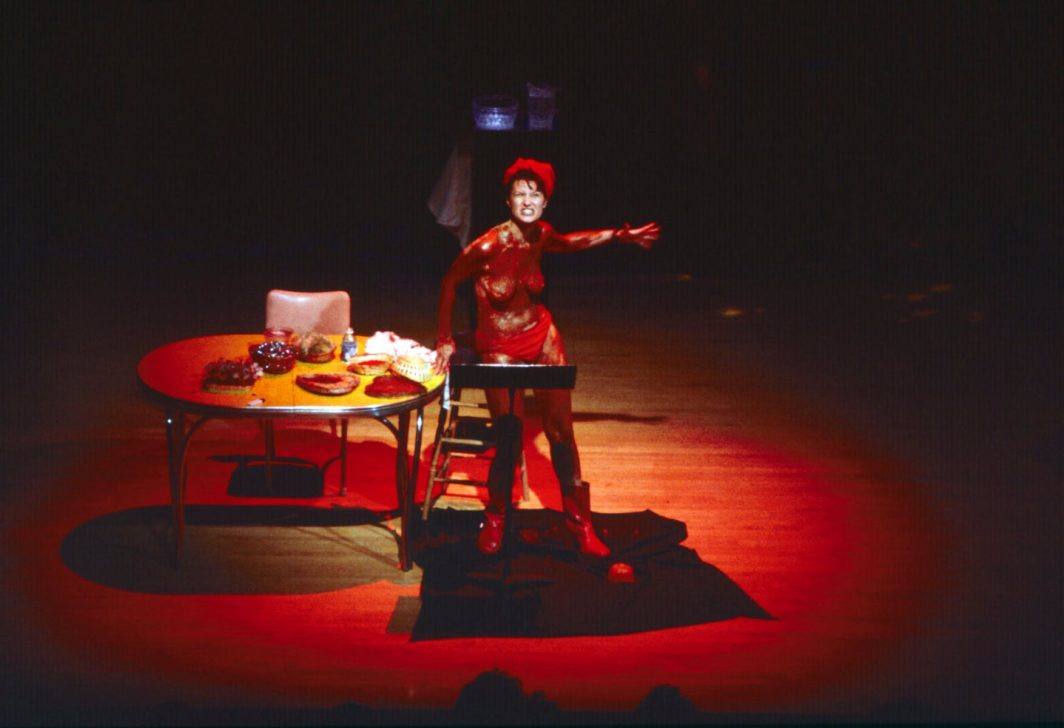 Many of us remember the ‘80s and ‘90s as being a time of hilariously bad (but comforting) clothes, music, and TV shows. It’s easy to forget through rose colored nostalgia glasses that these were also incredibly charged and polarized times socially and politically. Conservative lawmaking tried to push marginalized people even further into the margins, but the ensuing Culture Wars made sure we were here to stay visible. This conflict and the truly stunning and subversive artwork that emerged from the queer artists of the time are the focus of the Walker Art Center’s A Different Kind of Intimacy: Queer and Radical Performance At The Walker 1990-1995 .

A Different Kind of Intimacy is full of ephemera, videos, and photographs and includes groundbreaking queer artists like Karen Finley (who’s book of essays, stories, photos and more lends this exhibit it’s name), Ishmael Houston-Jones, and the Twin Cities’ own Patrick Scully. In addition to being rooted in queer ideas and interests, artwork being created in this time fought against racism and pushed boundaries all around. A Different Kind of Intimacy reflects that, offering a well-rounded collection in the small Best Buy Aperture at the Walker. The small space, which is free for visitors to explore in the main corridor of the Herzog building, is a great fit for the intimacy many of these artists sought to portray with their classic works. It also forces us as patrons to get up close and personal and face off with the ugliness of the racism, AIDS epidemic, and rampant sexism and queerphobia of the time.

All of the artists featured in A Different Kind of Intimacy have been featured at the Walker before, making this a comfortable homecoming for a number of important LGBTQ+ artists. Gwyneth Shanks, from the Walker’s Visual Art department adds “My desire to work at the Walker was closely linked to my long-held respect for the work the Walker has done, and continues to do. This show is quite personal in that regard, and it has been a pleasure to spend time in the Walker’s archives, unearthing this history in more detail. It has also been an absolute pleasure to meet artists like Patrick Scully and activists and curators like Eleanore Savage, both still based in the Twin Cities. They feature in the exhibit, and spending time with each of them and learning more about the queer landscape of the Twin Cities in the early ’90s and their own activist and artistic practices has been enriching.”

I asked Shanks about some of the pieces on display in this exhibit. She was most excited to talk about costume and set pieces from Ron Vawter’s Roy Cohn/Jack Smith. “Vawter was an actor across film, stage, and experimental theater, and Roy Cohn/Jack Smith was the last solo theatre piece he developed before he passed away from HIV/AIDS in 1994. The Walker was gifted the set and costume for the piece a few years after his passing, as the art center had played a key role in supporting Ron’s work. The costume and set, as visitors will see, are made up of lush, colorful fabrics, kitchy gold props, and costume jewelry. It’s really a delight to look at, belying, in many ways, the more serious themes Ron explored in the work. This is also the first time since Ron’s last performance and his death that his costume will be on display. The display for me is both a celebration of his work and a poignant reflection on his death and the deaths of so many artists of the time from HIV/AIDS.”

A Different Kind of Intimacy: Queer and Radical Performance At The Walker 1990-1995 is currently on display at the Best Buy Aperture in the Herzog building of the Walker Arts Center. You can walk in and take a look around at no charge. This space was meant to welcome people in for intimate exhibits, and A Different Kind of Intimacy is a great exhibit to fill that space. Find out more at the Walker’s website, or plan a full trip.