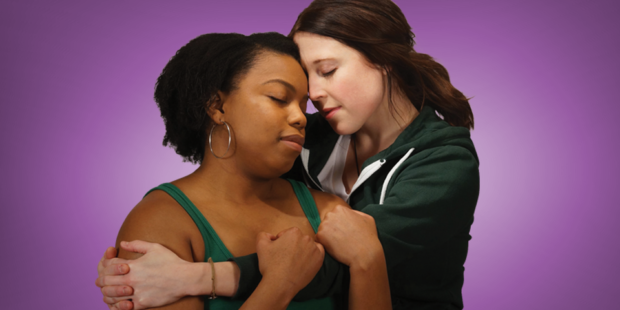 Cardboard Piano by Hansol Jung at Park Square Theater has a lot going for it. Stellar performances make the theatre vibrate with emotion and energy as Ansa Akyea, Kiara Jovanne, Adelin Phelps, and Michael Jemison tell this hard story. The plot centers around Chris and Adiel, two teenage girls who fall in love in war torn Uganda in 1999. Tragedy strikes right before intermission, and Act II focuses on Chris reuniting with the man who (arguably) caused the tragedy. They’re in 2014 now and both grapple to find the piece of chosen family they left in each other when anger and spite took over. It is definitely an emotional script, and I think the stories of gay Ugandans are crucial right now. Nonetheless, I had mixed feelings leaving the theater.

Cardboard Piano tries to tell sympathetic stories of all of the characters involved, but it misses a lot of marks. Chris as the main character, a child of white missionaries who come to Africa to build and open a church there, is frustrating. If we’re going to tell stories of Africans (and we should!) they should actually be about Africans. Furthermore, the young boy who turns on Chris and Adiel so suddenly is a traumatized thirteen year old who has been forced into performing terrible deeds and is now being tortured for failing to comply any longer. The fact that there is initially no understanding or compassion for the brainwashing and torture he has endured is problematic at best. So much of this script hinges on the Western savior complex and promises to comfort Western hearts when things start going awry. That’s a problem when we’re wanting to talk about lesbian Ugandans or victims of torture or child soldiers. The end of the second act does change this format up, and when we finally get to pieces about rebuilding and forgiveness, you will probably tear up even if you have the same trouble with the rest of the script that I did. There is a powerful message in the end about chosen family and how trauma binds people together–but that alone isn’t enough to save this piece.

None of that says anything about Park Square’s production quality though. From a set, sound, and lights perspective this show is darkly beautiful, haunting even in the literal sunnier second half. A simple set, some well-timed sounds, and a beautiful light design go a long way to keeping us engaged. The script itself isn’t all bad. The character work is phenomenal and even when I wanted to scream at a character, I knew they’d find their footing again. That’s powerful character writing. What’s even more powerful, and basically sells the show, are these performances. Ansa Akyea is one of my favorite actors in the Twin Cities. He’s a complete chameleon on stage and that’s especially present in this show as he switches characters halfway through. Adelin Phelps is always a joy to watch, and Michael Jemison fits perfectly with these performers. The real breakout performance though is Kiara Jackson who plays Adiel in Act I and Ruth in Act II. These characters are wildly different people, right down to their ages, and I bought every second of Jackson’s performance and wanted more.

This is the part where I recommend the show to you, or not. That’s a tough call in the case of Cardboard Piano. If you, like me, are sick of dead or miserable LGBTQ+ characters on stage, this is not the show for you. This play definitely falls into the trope of making death and misery seem like the punishment queer people face when they try to be happy. However, a lot of other LGBTQ+ people were there that night, and not all of them agree with me. That’s great! Art is subjective to taste, always, even when as a reviewer we try to be as impartial as possible. It is a hard show that I’m not sure pays off–for me. However, if you like new stories, enjoy the emotional pull that the aforementioned trope does genuinely bring, or are just a really big fan of really stunning acting (and don’t care about much else), you’ll probably love the show.

If you do want to see Cardboard Piano, it’s running through February 18th at Park Square Theater in St. Paul. Tickets and more information are available at their website.