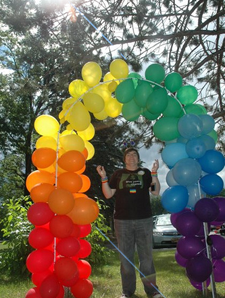 This year’s 2010 Pine City Pride was a soggy but well attended event that focused on love and the celebration of commitments. Emceed by Jessie Tebben, the day was periodically dampened by rain showers, but that was not enough to dampen the spirits of those present. Held in Voyageur Park just in the heart of Pine City, this was the sixth consecutive annual event to be held on the grounds adjacent the Pine City VFW. All ages were welcomed to the festival that had the charm of any other small town gathering, with home spun fun and goodies for everyone. Along with other representative seeking the LGBT vote, gubernatorial candidate Mark Dayton addressed the wet picnickers, and pledged to end discrimination against the LGBT community and to legalize same-gender marriages should he become Minnesota’s next Governor.

Instead of the anticipated demonstration from a small, conservative Christian contingent holding a picnic on the other side of town, attendees at the Pride picnic were treated to a much more passive-aggressive attack on our community. The anti-gay group elected to slip pages of paper under the windshield wipers of many cars at Voyageur Park. The signs simply read “Gay is not that way;” with awkward phrasing like that, it seems the protesters were in too much of a hurry to communicate effectively.

This year’s event was made possible in part by the organizing and fundraising efforts of several groups including the East Central MN Men’s and the East Central MN  Women’s Circles as well as the Mora PFLAG chapter and others. Tebben reported that $500.00 was raised by a GSA drag show at the Anoka Ramsey Community College and another $550.00 raised by a garage sale. The grassroots fundraising in support of this year’s festival is certainly a testament to the dedication rural Minnesota LGBT people have in displaying their courage, strength and unity. It was well worth being a little damp to share in the joy of this celebration!

2 responses to “Pine City Pride Brings a Rainbow of Love!”