There are few things a rainbow squad comprised of LGBTQ+ besties loves more than a night dedicated to partying and starting fresh, making New Year’s Eve one of our favorite nights of the year. I was tickled pink when I moved to Minneapolis almost a decade ago and was overwhelmed by choices on where to go and what to do for the big night. As time has gone on, that overwhelm feels less fresh and more, well, overwhelming, and I know I’m not alone in that. To help everyone, including myself, narrow down our choices I’ve sifted through the hordes of New Year’s Eve invites to bring you a list of the most fun, queer, or otherwise interesting New Year’s Eve events happening to ring in 2018.

For Dancing the Night Away
For those of us that like a traditional New Year’s Eve full of booze, potential partners of our preferred genders, and dancing, there is something going on in every part of the city. That includes: 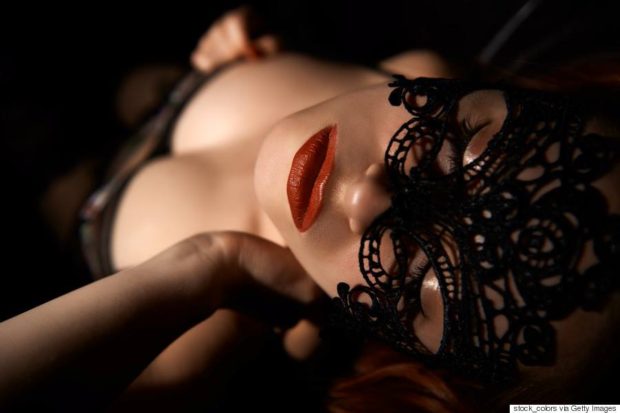 A Ground Zero New Year’s Eve for only $7 cover; this hardcore club that features regular bondage shows in the back will be up to their usual tricks, allowing you to party with the goth kids you never felt cool enough to approach in high school until the ball drops. Dom(me)s will be in the back as usual too, highlighting this club’s Bondage A-Go-Go night.

If you’re in or closer to St. Paul and not too keen on crossing the river for the night, never fear. Camp Bar’s New Year’s Eve Party has music by Mia Dorr & DJ Didi, a champagne toast at midnight, and NO COVER. Find out more here.

Though not featured on their website, The Saloon’s New Year’s Eve event plans to be every bit as raucous as we’ve come to expect this from downtown staple. They’re going 18+ for the night and offering free champagne right before midnight. They’ve got a DJ, dancers, and you can learn more here.

For the Quieter Crowd
This whole year I’ve gravitated towards art and quiet (though still-very-fun) fun as opposed to spending endless hours at parties or clubs, and if you’re like me, here’s some really fun stuff happening that won’t cause you to call in to work the next day: 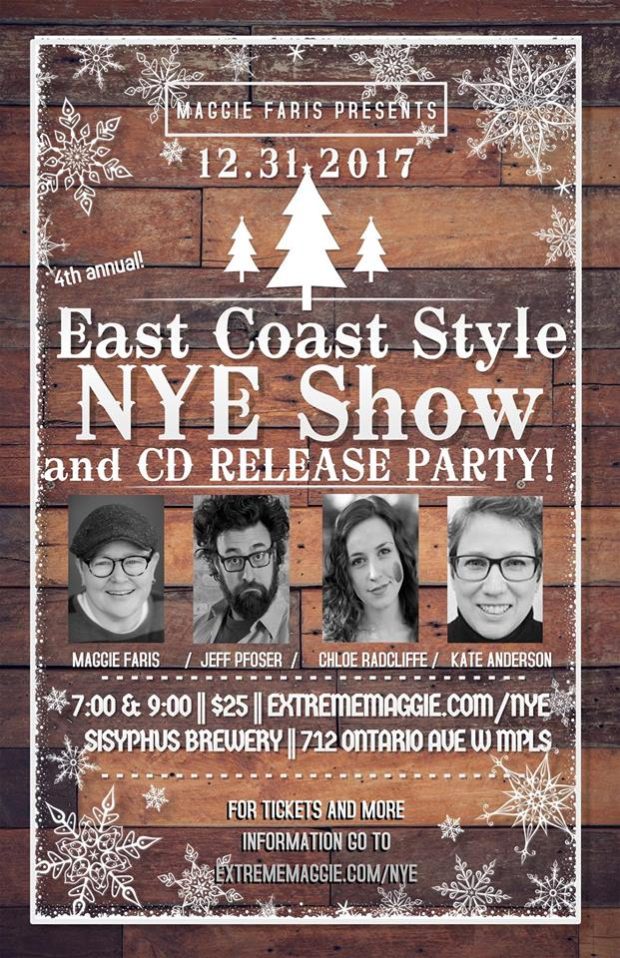 Well-known local lesbian comedian Maggie Farris is bringing back her FOURTH Annual East Coast Style NYE Show at Sisyphus Brewing. She’s got Jeff Pfoser, Chloe Radcliffe, and Kate Anderson with her–all who I’ve seen many times and can vouch for the hilarity of. There’s not much else to say about this great night of comedy, except that the show ends at 11 (hence the “East Coast” style) so if you’ve got an early morning or just want to beat the wilder crowds home, this is the perfect night for you.

Also ending in plenty of time to get to another event or just go home is Smartmouth Comedy’s monthly It’s That Time of The Month. This is a monthly sketch comedy show where performers have just six hours to rehearse a script that came together just a day and a half prior. Featuring a few LGBTQ+ players and always a great night, this 7:30 P.M. show has tickets available here.

A PSSY CTRL New Year’s Eve is happening, and I’m so excited. This is one of my favorite stand-up comedy shows, and this year’s line-up features Jan Syverson and Grace Thomas (who have left the cities since this show’s inception) returning. You have two options depending on if you like being out at midnight or not–an 8:00 show and a 10:30 show. Tickets and details are here.

One night of fun isn’t enough for the top names in burlesque, so New Year’s Noire is a four day event chock full of some of the biggest names in burlesque and cabaret. Local darlings Elektra Cute Presents and Nadine DuBois team up with big acts from NYC and beyond to produce this celebration, and the all-star line-up changes every night. This takes place at the Lab Theater, and their website has more info for you, including how to snag tickets!

Wilde Cafe and Spirits is a sweet little gay owned cafe near the river (and my apartment, ha!) just over the Hennepin Avenue bridge coming into Northeast, and they’ve got jazz music and their delicious gourmet food happening on New Year’s Eve. If you want to walk back to your car with one of the best views in the city, this is where you want to be. The event’s Facebook page is the best place to find out more.

For Those Looking for Art AND A Party
The events featured below all have performers PLUS dancing or other miscellaneous fun. They’re the best options if you don’t really know what you want to do, you want to run into queer community members, or you like to go to parties but prefer to have some kind of entertainment going on so you don’t have to dance or make conversation the whole time. The most exciting ones I found are:

New Year’s Eve at Can Can Wonderland  features music by the Brass Messengers and queer favorite Symone Smash It, a vaudeville show, and MINI-GOLF. This is the most eclectic event I’ve found, in true Can Can style. Tickets available here.

Last year Lush’s New Year’s Eve Annual Masquerade Ball sold out, but as of now there are still tickets so hurry over to the website and secure yours now! In addition to all the fun a masquerade ball normally promises, this one’s got pop up performances and living art installations by the #DragRevolution cast, masked go-go dancers, and popular DJ’s Leif Anderson and Miss Scarlett spinning all night.

2018 New Year Party with the La Femme Cast at the Gay 90’s is exactly what it sounds like–drag queens, dancing, and a big to-do about New Year’s Eve itself. The 90’s ALSO has a free champagne toast, and the Karaoke Bar and Retro Game Room will also be open.

Raja and Raven from RuPaul’s Drag Race  join local stars Magic Dyke, Julia Starr and more for Flip Phone’s 2018: The Party at First Avenue this year. Flip Phone events sell out regularly, so this is another one you want to go ahead and grab if this is your chosen event for the night. 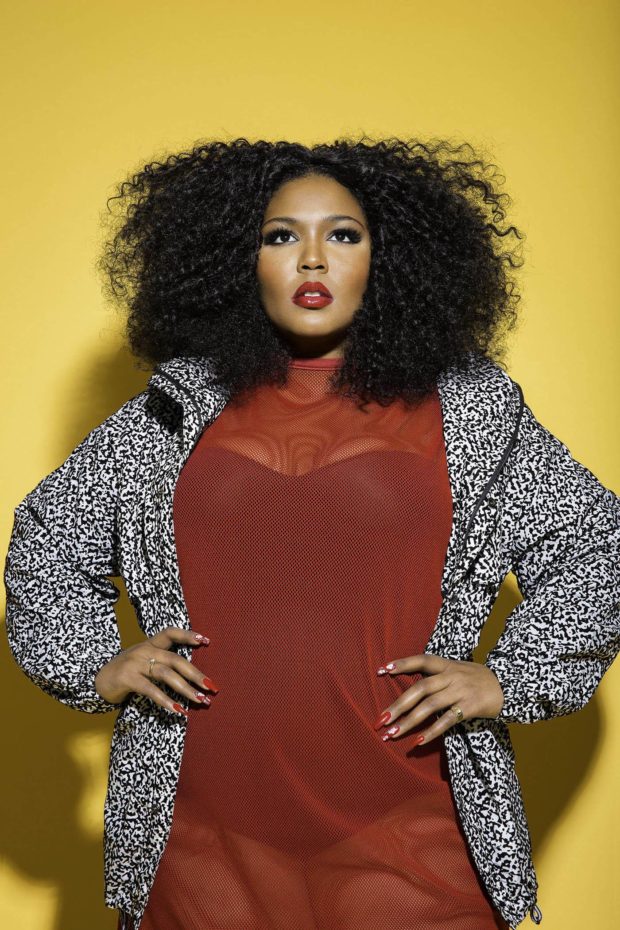 I’ll end this New Year’s Eve round-up with the party I’m most excited about but may not be able to make. New Year’s Eve Party with Lizzo is happening at The Myth, and if bringing in the new year with Lizzo, Brooke Candy, CupcakKe and Doja Cat wasn’t enough to excite you there is a GRRRL PRTY! Reunion planned and that’s going to make The Myth the place to be for queer women and their friends this New Year’s Eve. Head over to the club’s website now to secure your spot.