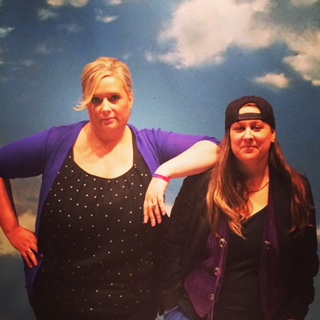 Attention Twin Cities! There is a new lesbian musical comedy duo on the scene, and they are armed with guitars, charm, and a U-Haul’s worth of lesbian jokes. Champagne Jamboree consists of Sarah McPeck, the comedian and go-getter known for hosting and curating The Big Fat Comedy Hour at Lush, and Amanda Costner, known for her own hilarious lesbian folk comedy. The two met when Costner got booked for McPeck’s show with no prior run-ins or introductions. They each loved what the other was doing comedically, and decided to write a song together. One song became became two, and so on and so forth until they’d formed an act neither wanted to let go of — Champagne Jamboree.

According to McPeck, Champagne Jamboree is “a lesbian folk musical comedy duo. If you can say that 3 times fast, you win our everlasting love. We are having a great time developing our comedy together, running around Minneapolis in the freezing cold doing sketch videos, reviews, promos, and taking pictures. I’m pretty impressed with everything we have accomplished thus far. We are planning a tour for later in the year, so right now we are doing a lot of planning, researching and deciding where the best places are to perform.”

Costner adds, “We officially ‘got together’ in September of this year and we’ve played about a dozen shows and recorded several sketch videos. Our style is to play high quality music combined with punchlines and sketch comedy. We often portray characters and improvise songs with the audience.”

I attended a recent The Big Fat Comedy Hour to see the duo in action and was delighted to recognize myself in songs about getting back out into the dating world, and in songs centered around recognizable relationship fights. I was eager to hear more about their songwriting process, which sounds just as laid back as you’d expect from a duo who pens joke songs about their love of marijuana.

“Usually we go to one of our apartments, relax, have a drink or biscuits and gravy for brunch — and then we decide what we want to write about. Sometimes Sarah has a style she feels like the song should be in. A lot of times I just play around with different licks and chord progressions and then we start layering the lyrics on top of whatever sounds good. A song just needs a good hook or starting line, then the rest flows. Also we laugh a lot when we’re making music,” Costner explains. The audience laughs a lot too, especially when songs are broken up by other bits, such as the pair taking phone calls during an awkward first date.

Champagne Jamoboree is unabashedly lesbian. This created a beautifully lewd show full of woman-on-woman sex jokes and a refusal to shy away from talking about bodies and all of their functions. I love women being crude and refusing to shut up about all of the glorious and terrible things bodies do, and I love when an act speaks so strongly to a lifestyle belonging to a marginalized group. It was, at times, clear that this was a new duo still finding their footing. I know McPeck personally and know her to be very concerned with inclusion, but there was a lyric that felt like it was erasing bisexual women — a group that I think would otherwise get a lot of joy out of Champagne Jamboree’s music. There were also some jokes that just didn’t land or felt really obvious, though those were few and far between. I saw enough really great, wonderfully queer comedy when I saw the act that I trust that in a matter of a few months, these hiccups will be smoothed over. Costner and McPeck are creating something really new in our comedy scene, and innovation takes time to perfect.

As someone who spends a lot of free time watching comedy and taking baby steps into my own forays, I’ve watched both McPeck and Costner for awhile now. Even with Costner’s musical background, Champagne Jamboree seems fresh and new in ways that will delight and surprise long-standing comedy audiences. Both artists seem to have come alive in new ways, creating jokes they couldn’t have on their own. It was a treat to see the pair cracking each other up as much as they were making everyone else laugh. Stand-up musical comedy duos are pretty rare in general, more so in the Twin Cities, and even more so in the queer arts scene. In addition to wanting to watch Champagne Jamboree grow, I hope that all of this newness and vitality inspires other LGBTQ+ comedians to start that project they didn’t even know they’d been dreaming of.

Champagne Jamboree is already playing a lot of gigs and picking up a lot of momentum.

“I really feel like all the work I have done with stand up and improv has been to get me to this point,” says McPeck. “This is where i need to be and where I want to be. I haven’t had this much fun performing in so long and that is really what it is all about. I think we will each work on our solo careers when the other one isn’t available and projects with other people, but for me at least, Champagne Jamboree is my primary focus and I am so excited to see where we go next.”