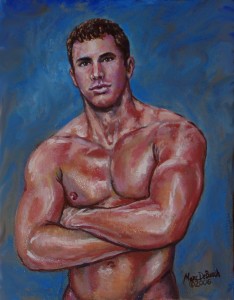 I wonder what standard the committee or individual making this determination followed?  Debauch’s work is well known to many people around the world and much of it is explicitly sexual in nature.  Had there been portrayal of intercourse, naked erections, ejaculation, etc., I could see why the image would be deemed inappropriate for the venue in which is currently being staged.  The Art Institutes International Minnesota (Ai Minnesota) is the official sponsor of the show.

However, Ai Minnesota is located downtown Minneapolis – just a short walk away from The Saloon where similarly attired (or not) images of young gay men loom 10 times larger than life on the corner of 9th and Hennepin in clear public view to all.   The Ai Minnesota call for submissions does not specifically address artistic standards.  They simply identify what is required in terms of how the art is to be delivered and the cost of entry.  Earlier this month there was a notice that the deadline had been extended, presumably related to the low response to the call.  A call between Debauch and Rob Anderson – the director of the show – failed to provide the artist with clear specifics on why his work was being rejected.  Debauch wrote a response to the call challenging the decision.

In his email he states:

A flurry of communication has been coming in to both the artist and the show’s officials expressing concern about the decision.  Although the jury may still be out on this topic and whether the piece will be displayed at the show, the bigger question is whether Pride is continuing to support increased censorship in order to draw lucrative corporate sponsorships and huge numbers year after year.

Many GLBT community members have become increasingly concerned that Pride seems less and less Queer friendly and more driven by the almighty buck.  Jennifer Pritchett, owner of The Smitten Kitten, states “When you let money make decisions for you, you run the risk of those decisions being antithetical to your mission.”

Debauch has been contacted via email by Dot Belstler, the current Executive Director of this year’s Twin Cities Pride.  Belstler writes “I am so sorry this has caused you and your colleagues such pain. It was certainly not the intent – nor was censorship. In the future, we will attempt to be more clear in the call for Art, but please understand that sexually explicit content must be handled with sensitivity.”  She also addressed the issue of censorship in the following statement “In this particular case, I believe “Mansweat” may have been confused with the full frontal nudity pictured in “Morning on the Balcony.”  Of course “Mansweat” is not too erotic, it is a beautiful painting and we would be proud to display it in the show.”

These comments have left many wondering what constitutes erotica in a digital age.  Any search engine will pull up a flaccid penis photograph while searching for information about syphilis.  As for art and nudes – sculptures of male nudes grace the entries of some of our most noted institutions including Westminster Presbyterian Church.   In this age, why should an oil painting of a male nude without an erection be considered too hot to handle?

What do you think?