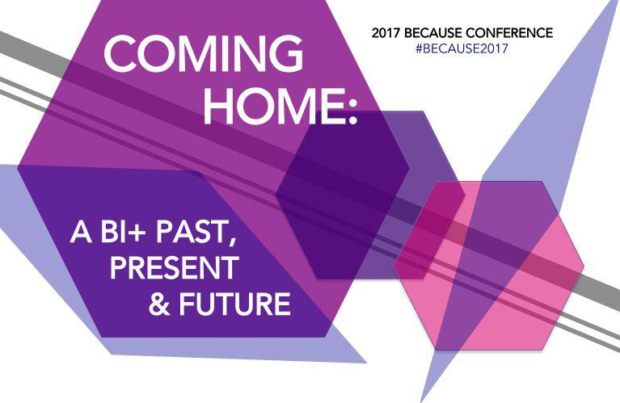 In 1992, a handful of bi+ activists gathered in Minneapolis to network, to build community and power, and to educate others. Twenty-five years later, bi+ activists from around the country will come to Minneapolis to continue to fight for bi+ visibility at the BECAUSE Conference.

BECAUSE stands for “Bi+ Empowerment Conference: A Uniting, Supportive Experience,” and its mission is “to be a safe and supportive community space in which bi+ (bisexual, pansexual, queer, fluid, and other non-monosexual identities) people of all varieties, are empowered and encouraged to discover, celebrate, and dig into their sexual identities and how those identities intersect with their other identities, with each other, and the world around us.”

It is produced by the Bisexual Organizing Project, and is the largest conference centered around non-monosexual identities in the United States.

Grace, a freelance writer/editor, blues singer-songwriter, poet, aspiring screenwriter, and a long time activist, focuses her activism on “bi+ (plus) identity, disability, Blackness, and fat acceptance; she also talks often about gender, class, and colorism and their intersections and connections to media, pop culture, and representation,” according to her conference bio.

Deerinwater is a writer whose work focuses on their “expertise on tribal sovereignty, resource extraction, and the Two Spirit community.” Deerinwater has been published in Bitch, The Establishment, Autostraddle, and The Matador Network and will soon appear in Teen Vogue, In These Times, Rewire, and Truthout, according to their conference bio.

The theme for the 2017 BECAUSE Conference is Coming Home: A Bi+ Past, Present, and Future. In addition to keynote speakers, entertainment, and socializing, the conference also includes a series of workshops.

The conference has already faced some challenges. Organizers struggled to secure campus space that was affordable and would not include police — an effort to ensure the safety of all attendees. The organizers settled on Metropolitan State University in St. Paul and are working with the university to ensure training of security personnel. The organizers are also bringing in the LGBTQ Guard.

From the event organizers:

We got an offer from Metropolitan State University and found a place that could work and where we could be helpful to them in return. So we are working with them to educate the campus and security about a number of issues of justice. We hope that this will increase safety and decrease any incidents. We have our own Safety Squad which will serve a number of functions for us over the weekend. Plus, this year, we will be partnering with the LGBTQ Guard to help look out for our own in a similar way, but will give us access to more trained responders.

Registration for the conference is currently open at BecauseConference.org.