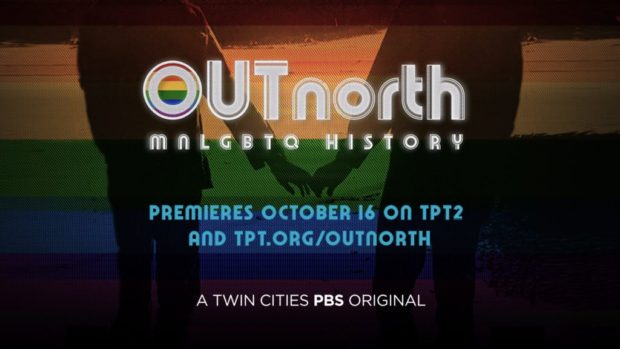 Out North – MNLGBTQ History dusts off important stories from the annals of queer history and brings them to your living room starting on October 16th. Out North is a documentary coming to TPT (our local PBS affiliate) chronicling the history of queer Minnesota and showing the social and political strides our state has made since the 1970s. The documentary focuses on those identities that have been underrepresented as white gay culture has become more mainstream. The film therefore covers stories of the Minnesota Two Spirit community alongside other queer communities of color. Also featured are stories of rarely remembered movements in queer culture like the women from the “Back to the Land” movement and tales of what it was like to be LGBTQ+ on the prairies of rural Minnesota.

Out North explores major events in our history alongside showing the different communities and identities that make us up. One such major event is the creation and running of FREE, one of the first LGBTQ+ college organizations in the country. This was considered a radical, revolutionary act that predates Stonewall. The history of Pride and the lack of safety in earlier parades and festivals is also chronicled, highlighting a stark difference between our impressions of Pride now (especially in the Twin Cities).

Films and live events featuring LGBTQ+ history are arguably the most important way to build and keep community. Many in our community don’t know how queer people met each other prior to gay bars becoming commonplace hangouts, and a lot of newly out people aren’t able to name important changemakers and moments in our history. This is not the fault of any individual, but speaks to a larger issue of how LGBTQ+ people have been written out of history or straight washed over time to appease heteronormative, cisnormative culture. Other marginalized communities have oral histories told from generation to generation. That’s where our ability to tell and retain our history is a little bit different. One has to first find a chosen queer family, and then catch up on the generations of history, if it hasn’t been lost by then. That makes projects like Out North especially crucial. You don’t have to buy a ticket. You don’t have to know someone in the event to find out about it. This film chock full of some of our most vital history is coming to TPT, a PBS syndicate that most of us have access too even without cable. This is a huge step forward for access to this history in Minnesota, and the stories, people, and moments covered in Out North are sure to affect even the most jaded of us.

According to Out North‘s page on the TPT website: “The film explores the past through people and place, personal moments and major milestones. Rather than chronicling politics and policy, these stories tilt toward the human, lived experience.”

Local LGBTQ+ heroes and activists such as Andrea Jenkins and Stewart Van Cleve are also involved in the project, making it feel extra personal to those of us that have been working or creating in the LGBTQ+ community over the past several years.

Out North specifically notes their use of this collection’s visual materials.

The film comes with several showings attached, including one at TPT’s studios themselves, one at Augsburg College, and one at Boneshaker Books. Most watch parties include conversation as well. Tickets are available here. Most events are free but require pre-registration. If you’re not up for an event, don’t worry. TPT will be broadcasting the film at 8:00 P.M. On October 16th.