Home Arts Savage Umbrella’s Ex-Gays: Not a Str8 Remount is a solid show about... 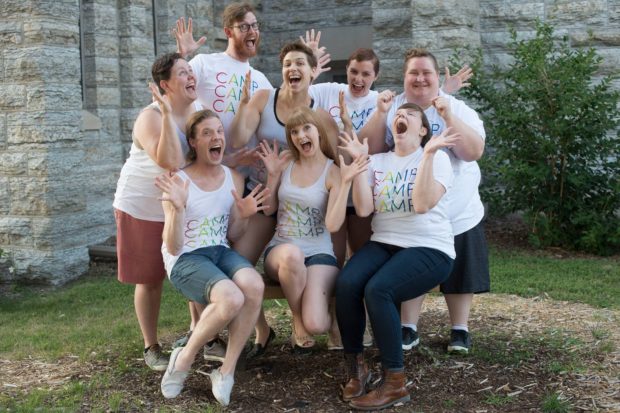 I don’t think I’ve ever started a review by stating that a play is too good at what it does. That is the level of terror, heartache, and yes, laughter, I was left with after Savage Umbrella’s remount of their hit show Ex-Gays by Eric F. Avery. For the most part, this is in an incredible compliment. From the time you enter Springhouse Ministry Center and grab your tickets you are sucked into the campiest of camps, Camp Str8-N-Arrow, and treated to one of the most solid casts I’ve seen in a long time.

This play is set at a corrective camp meant to bring campers back to God’s love after falling prey to the sin of homosexuality. (Bi and trans people are mentioned and noted but in the counselors’ eyes that is all lumped under homosexuality. This is actually fairly faithful to the mindset of the ex-gay movement.) Ex-Gays: Not a Str8 Remount focuses on a group of counselors and interns trying to “save” campers while still struggling with their own sexualities and faith. It’s a serious, timely topic—but if you’re like me, sometimes laughing at the most terrifying things in our society is the only way to cope. To that end, Savage Umbrella delivers tenfold. We never forget how serious and traumatic reparative therapy camps are, but we also laugh—a lot.

Savage Umbrella is a company I always admire for creating such a full show with such minimal set and tech, and Ex-Gays is no exception. You won’t be distracted by how amazing the set or costumes are but you also won’t notice that there really aren’t any bells and whistles. This is my favorite theatre aesthetic when done well. This show crushes it by the way it uses the ensemble of actors and very little else to tell this important story.

Then there are those actors! In almost every single one of my reviews, I rave about one or two performers, and then talk about the others if need be. However, I can’t tell you who the best performer in this remount is because this is an incredible ensemble that I am still in awe of. To keep up this level of energy for this long is a feat in and of itself and to bring such a heartwrenching conclusion so naturally is nothing short of masterful. Savage Umbrella’s devotion to ensemble work is never more apparent than in Ex-Gays. Director Laura Leffler and Assistant Director Meghan Gunderson probably deserve most of the praise for the cohesion and consistent level of skill displayed, but that in no way puts down the raw and real talent present in every single cast member. Leffler and Gunderson also show skillful directing in their use of the small space, using multiple staging areas and sometimes simultaneous scenes to tell this story.

To those who saw the original Ex-Gays, there are still plenty of surprises. Courtney Stirn plays Intern Alex, a new character who is not at all what they seem. Alex is also one thousand percent necessary to the audience in the world of Ex-Gays. This character is a touchstone for the audience, someone that makes us feel safe in this story we’ve been totally sucked into. We’re not alone anymore once Alex shows up and starts to scheming to actually help some campers. Not only does that make other character arcs and plot points make a lot more sense, it helps the audience trust that Savage Umbrella isn’t leading us to a place too terrifying to come back from.

Also new to this show is thirty to forty more minutes that allow the show to breathe and be what it was probably capable of all along. We get to explore characters, love stories, and the insidiousness of conservative Christianity with new depths. The show is almost unrecognizable (in a good way) in spite of the familiar drawings on the set and many of the same characters. My one complaint, and I have to be a little vague to avoid spoilers, is that there’s no clear resolution for Alex and the campers involved in that story. This may have been intentional, but when you’re dealing with really gripping, horrifying stories like this one, knowing that our touchstone is safe would have been an incredibly valuable addition.

Normally when I see a brilliant show, I want to tell the world that everybody should go see it. That is, unfortunately not the case with Ex-Gays due to people’s anxiety levels and preferences. There is a lot of audience participation—like, a lot, and while as an artistic style I respect that element, in most plays there is an easy out. Some plays include a seating area for those who can’t participate, and usually if it’s clear you’re not participating, the cast stops trying to make you. There is no such out in Ex-Gays.

Artistically, I want to commend this choice because there is also no easy out for something as awful as ex-gay therapy or camp for most people and I think that’s the point. However, for those with severe anxiety that manifests as social anxiety, those with a cognitive or personality disorder where too much stimuli is a medical concern, or for those in the early stages of recovery from Religious Trauma Syndrome, this play is probably something you should skip (Religious Trauma Syndrome is a form of PTSD that comes from being raised in or forced into authoritarian religious sects).

The latter really breaks my heart because this play could be for people with Religious Trauma Syndrome, but with no option to bow out of audience participation without bowing out of the whole play, I’m not sure it’s safe for those people. They are essentially being asked to relive their trauma when being pulled so directly into the story. I have such mixed feelings about saying all of this. Ex-Gays is really, really good and really, really important. I still do not think it is a good idea for those recovering from this trauma or who get overwhelmed or overstimulated by audience participation (Please note that this is very different than feeling awkward or unsure for audience participation, which most Minnesotans deal with. For those people, that participation is actually very important).

In the program, Laura Leffler and Savage Umbrella talk about why this play is so important and offer resources for those struggling with mental health or trauma related to sexual, gender, or religious identity. I say this to say, please read your program if you go to the show. The heart and soul of this show artistically is its solid ensemble work and ability to turn what could be a horror show into a dark comedy. The heart and soul of this show thematically is the care and love that Savage Umbrella put into it. Not for the show, but for every queer person who has struggled under the weight of religious expectations. There isn’t even a word that can encapsulate how effective Ex-Gays is. It is dark and heavy one minute and absolutely hilarious the next. It leaves us feeling unsettled and overwhelmed and it should.

If you do not have direct experience with abusive religions and can handle this level of audience participation, then you should absolutely see this show. It is masterfully directed and acted and for that reason alone theatre lovers not impacted by this subject should go. Certainly for those affected directly or indirectly by authoritarian or fire and brimstone religious experiences, this show can be a challenge. If you’re able to take a close friend or otherwise keep yourself safe, Ex-Gays offers an end to the silence surrounding these issues and offers enough laughs to keep you hanging on even when it gets difficult. When you go, be prepared for erotic cake decorating, hilarious hymn parodies, and more double entendres than you could possibly imagine. You should also be prepared for a stone cold satire of religious zealotry and the undeniable harm that that does our LGBTQ+ community, as well as the emotional weight and reality of that harm.

Ex-Gays: Not A Str8 Remount is playing at Springhouse Ministry Center until September 30th. You can find out more and snag your tickets, starting at just $15, here.