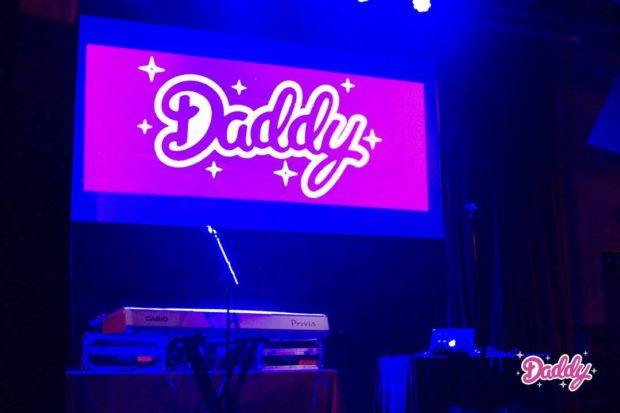 It would seem that Minneapolis is not lacking in inclusive queer night life; we have some of the best LGBTQ+ bars I have ever been too. We have several monthly dance nights like Grrrl Scout and Soul Friday that are always filled to the brim with eager queers. We have underground spots, mainstream stars, and lots of great events in between.

Yet when I walked into Daddy: A Queer Variety Show and Dance Night on June 29th something felt wonderfully different. I felt like I was in an underground avant garde space even though I was at the Icehouse, a popular bar on Eat Street with decadent whiskey options and a lovely dance floor. Everything in the space felt hand-crafted with care from performances to the audience curated to the Daddy memorabilia being sold. Two close friends and I carved out an “introvert corner” where we could see performances and sit comfortably but not be totally thrown into the fray for dance and party time. Our space was generally well-respected but we still felt like we were included and a part of the action. I do not expect to call night life entertainment transformative, but I felt seen and understand throughout Daddy in ways that I rarely do just watching a show at a club. Given all of that, I was eager to talk to Archie Bongiovanni, one of the organizers of the event about the event.

Says Bongiovanni of Daddy‘s concept and vision, “Daddy brings together the queer community for a mix of performances, dances, live music, and amazing DJs. Daddy features burlesque, drag, music, comedy, poetry, fashion, Djs, and “all queer” performances. It’s a concept Brent (Colbert, musician and organizer) came up with without a super clear vision, but he met with me to talk about the idea. We had a great conversation and decided to be co-partners in Daddy. We like to describe Daddy as queer, subversive, weird, and full of love. We emphasize that anyone can be a daddy. Daddy is for freaks of any gender, soft or hard, hairy or smooth, for the tops, the bottoms and the switches. We want a strong emphasis on self-expression and self-identity. ALSO, we just wanna get sweaty and messy with you on the dance floor.” 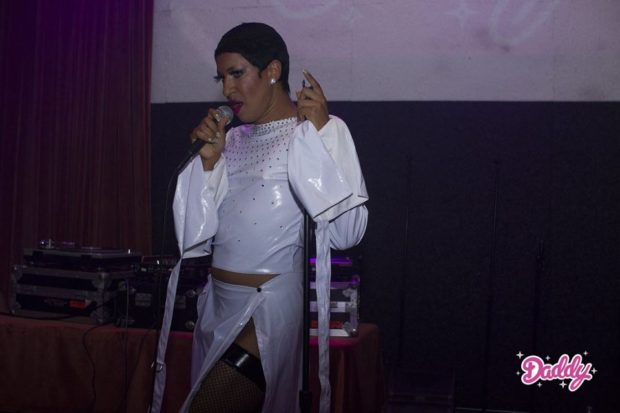 While the talent in the variety show portion of the show will rotate each time, those on June 29th’s premiere of the event were outstanding. Catherine Charles did their first full music set at a live venue and their “gay music about gay stuff” was completely appropriate — fun, sexy, and able to fill a room with personality and talent. Jenna Cis delivered evocative performance art. Marcel Michelle Obama performed burlesque throughout the night with all of the sexuality, queerness, and emotion that fans have come to expect from her. There was a fashion show of bb phat apparel with local queer and gender non-conforming models that was gorgeous. Liv Hnilicka’s hosting was saucy, compassionate, and above all, fun.

Performances were broken up with opportunities for dancing to DJ Yoni and DJ Apollolypstic, two innovative DJs who still knew when to play known crowd-pleasers. The dance breaks were as sweaty and fun as promised.It was clear early on that by and large the audience was as generous and loving as those giving their all on stage. Perhaps most notable about the hand-crafted audience is that poet Oliver Schminkey’s performance left the audience riveted. Schminkey themselves noted that they didn’t know what to expect when performing poetry at a dance night, but that the audience was incredibly attentive and pulled into the act. As a variety show, it is rare for me to go out and want a late night event to last longer, but I could have watched each of these acts for ten more minutes each. I feel confident that I’m not alone in that sentiment. Everyone at Daddy that I ran into was absolutely there to enjoy the night and encourage others to too. I felt wild, free and safe at the same time.

Says Bongiovanni of the event’s stunning combination of sensuality and security, “Basically we are trying to re-market what a Daddy is and take away from the hyper-masculine meaning of it. Juleana Enright helped sum up our vision: “Instead of existing within stereotypical confines of its societal definition, Daddy hopes to be a safe space, aka the connective tissue where folx from across queer scenes can unite and share in uncensored expression while basking in a vibrant, playful environment. Daddy already has this queer connotation in terms of cis, male gay sex and we would like to take that word and make it accessible to non-cis/non-male folx and maybe even take the capitalistic approach out of it too.”

Daddy t-shirts sold at the June 29th event saw proceeds donated to RECLAIM, a non-profit devoted to helping LGBTQ+ youth access the mental health care they need to reclaim their lives from oppression. This air of generosity pulsed through the whole night. Organizer Colbert noted that “There was reverence, chaos, fun and a lot of love all in one night.” Colbert was excited then to see the party exceed his wildest expectations as the audience was exceptionally kind to performers and each other throughout the night.

Bongiovanni echoed the sentiment, stating that “Usually dance nights are about getting down and dirty — and this was about that, but it felt different. Folks listened when folks on stage spoke, they cheered for each other, they threw money at our performers. They bought Daddy shirts with generosity, meaning we could raise a lot of money for Reclaim!. It was better than I could have imagined.”

While by most accounts Daddy was an exceptional space full of love and queer spirit, no space or event is perfect, especially on its first run. After the June 29th event, a few audience members did report feeling unsafe, and a couple of troubling incidents were made known to organizers. Daddy is absolutely created with community in mind though, and as such organizers are looking ahead to ways they can improve moving forward. While a large space full of people can never be fully free of problems, Bongiovanni did let me know that they are hoping to have mediators at future events who will provide comfort, or, if needed, de-escalate tense situations. This allows organizers to focus on running the event, and allows audience to find someone who’s job it is to keep them safe instead of relying on people who may be working on several other issues at a time. The heart of Daddy will remain as it grows, and it will continue to be a safe space for experimental art, queer love, and heartfelt organizing, attendance, and performances.

Colbert and Bongiovanni partnered to create a really special, beautiful night of weirdness, queerness, and support, and moving forward it sounds like plans are already in motion to make Daddy even better. The two were not looking to fill a void per se, but Daddy felt unique to me in a way I’m still having trouble vocalizing. Maybe it was because I was in a room full of people as queer and weird I am. Maybe it’s because the variety show was the only thing like it I’ve seen. Maybe though, it’s because Bongiovanni and Colbert put their heart and soul into curating, marketing, and running an event made for the queerest and weirdest of us all (where most are still welcome). The heart for the queer community that these two have beat with every dance move during Daddy, and as such when Hnilicka announced a show on August 10th in between performances, a huge cheer went up in the crowd. We were rooted in the moment, but Daddy left us so thirsty and so eager for so much more.

The next Daddy: A Queer Variety Show and Dance Night will be on August 10th at the Icehouse. Daddy shirts sold will benefit Cafe Southside/3405 Chicago. Performers and ticket link are still to-be-announced, but check out their Facebook page for more information as it unfolds.