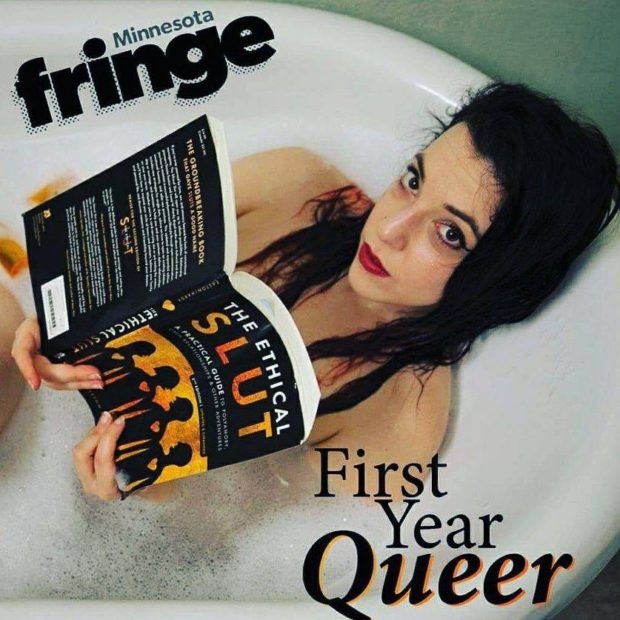 Storytelling is an incredibly underrated, almost underground artistic medium, and the storytelling community here in the Twin Cities is overflowing with LGBTQ+ artists aching to provide laughter and catharsis to audience members. Storytelling is the simple but vital art of writing and performing stories, usually true, usually about one’s own life. It is one of my absolute favorite mediums. Every good writing workshop or class I’ve ever been too has emphasized how universal personal storytelling actually is. The more detailed you get, the more people will relate to the quirks and emotions of your piece. I am drawn magnetically to good storytelling shows, and there are some phenomenal outlets for live storytelling here in the Cities. One of them is actually the upcoming Fringe Festival. While this is often thought of as a theatre festival, a number of dancers, improv troupes and yes, storytellers have made quite a name for themselves every year throughout the festival’s tenure.

One emerging storyteller we should all be grateful made it into Fringe this year is former Gadfly Theatre and Patrick’s Cabaret actor Lyssa Sparrow. Lyssa has been working on her first full-length storytelling show First Year Queer for some time, and it will debut in it’s entirety at the Fringe Festival on Friday, August 4th at 5:30 P.M. Lyssa is new to the field of storytelling and is already making a splash, having appeared in Raw Sugar’s The Funny 2017 and earning one of the coveted spots for the RISK podcast last time they recorded in Minneapolis. First Year Queer chronicles Lyssa’s first year out of the closet as bisexual, polyamorous, and kinky. She also discusses in depth her experiences coming out as a sexual assault survivor and someone who lives with depression and anxiety. First Year Queer is just the next major stop on Lyssa’s storytelling and theatrical journey, and she was kind enough to sit down with me to talk about her transition into storytelling and how that journey has evolved since she began a career in theatre after graduating college.

What do theatre and storytelling mean to you personally?

A lot! I grew up in a town with only 2,000 people in it, and theatre was my creative outlet from the time I was seven. That’s when I decided I wanted to be an actor, and theatre has really grown with me as I realized I should start developing my own work. That transition started when I was asked to write and perform in two one-minute plays for Patrick’s Cabaret a couple years ago. That was the best I’d felt doing any theatre since college. After that experience I was addicted to writing and performing my own material. It feels the best.

As you’ve come out of the closet and become more comfortable in your own skin, how has your work in theatre and storytelling changed or grown?

I’ve had a lot of shifts over the past couple of years. I’ve come out as bisexual, polyamorous, and kinky. I also came out as a victim of sexual assault and someone who lives with depression and anxiety. After being more open and living my life, I realized that a lot of entertainment outlets I used just didn’t tell stories that I was interested in hearing anymore, or perpetuated false stigmas. I want to help end the stigma surrounding all of those things, and I found my voice in story telling. Artistically that means as I learned storytelling I was able to finally let go of the idea of wanting to be an actor, which has been a constant struggle for me. I love performing but acting always felt weird. Being a creator and storyteller feels the best. Having the social justice piece attached to my work is important to me. So I let go of what an actor is supposed to be and started telling stories I felt the world needed. I want to create work that destigmatizes those taboo ideas I mentioned earlier, whether that’s living as a poly person or struggling with depression.

Has that been altered at all by our changing society and structures?

It seems more vital now for me to say something that is worth saying, and to be the best advocate and activist through my art. It’s even more important to make work that makes an impact. I want to make things that I’ll be proud of 50 years from now. I want to be able to say “I did that. I helped with that. That means something to me.” It’s also more of a life pathway to me now than before, to make theatre for social change.

What do you think audiences need from artists right now? How does your work seek to provide that?

That’s something I think about a lot, because I think a lot of artists want to really challenge the audience in a way that seems combative, or like it’s the audience’s responsibility to understand and “get” the work. Then there’s people who’s work is crucial but are constantly being asked to tone down their work or to educate or mediate instead of creating what they want. That isn’t their responsibility as an artist. It’s exhausting when that becomes the expectation. For me though, I come from a place of passing privilege and grew up liberal in a really small town. I’m very used to being that educator or mediator for people. It’s something that I can do that I understand some artists aren’t in a place to do. It’s something that I’ve been practicing since very young. Audiences do need someone who will come in at their level and talk to them about what’s going on, and I feel good doing that. I love storytelling because I hate the fourth wall. I like talking to the audience and inviting them in. I think about “how would I talk to people from my hometown about this?” when I’m creating work, and I do think that’s needed right now. It takes the burden off of people who can’t express themselves that way, and it does help spread awareness that is necessary.

Alternatively, what are you looking for FROM audiences right now as you perform?

I’m craving empathy and a willingness to engage in conversation and in ideas that aren’t your own. I need a willingness to relax your discomfort response, the response of “oh, I would never”, or “oh, that’s gross”, especially when I’m talking about something like kink or polyamory. The understanding that just because something isn’t for you doesn’t mean it’s wrong or bad is something I really need when I perform.

Where do you want to see your artistic career take you over the next couple of years?

I want to make Lyssa Sparrow a production company. I want to get non-profit status. I want to have a website and be able to tour shows about mental health, sexual assault, sexuality and sex positivity. I want to continue engaging people in conversations. I maybe even want a podcast about these topics. Essentially I still want to be doing this but with more foundations beneath my feet.

I was beyond excited to get a Fringe slot this year, because I knew it would be my first major production in launching my company Lyssa Sparrow Productions. I don’t know exactly when it will happen, but in the next two years, I’d like to get Lyssa Sparrow Productions a non-profit status. I’ve got a lot of ideas, but I know I want to continually engage people in conversation in multiple formats and mediums. I want to have a website that will not only let people know the Lyssa Sparrow productions exists, but serves as a resource center, and a place for community to connect and foster. I also want to be able to tour shows about mental health, sexual assault, sexuality and sex positivity across the state and nation. I also want a podcast series so I can create story telling expeirneces without having to be in the room with people at the same time.

Where can we see your work next? Any other places we should look to support you?

I’ll be launching a Kickstarter soon, and Facebook is the best way to hear about that or just keep up with where I am and what I’m doing. You can also hear me on the RISK podcast here, doing a little bit of my show. I’ll be at Fringe for the full-length First Year Queer. That information is here.