Welcome back to the Queer Arts Calendar, our awesome round up of great Twin Cities arts events being produced, performed, or otherwise directly created by or of interest to LGBTQ+ artists and audiences in the Twin Cities. For our special Pride edition, I have chosen to exclude official Pride events with a few blaring exceptions (mostly fundraisers). Why? Because their own website is super easily accessible here, and because I wanted to make room for the plethora of other non-official Twin Cities Pride events going on. So, without further ado, here’s how to jam pack your Pride schedule with radical art this latter half of June.

Theatre
Still running after last month’s Must Sees are two events that are hilarious, queer, and feminist: the One Act Festival by Gadfly Theatre Productions I’m producing and Raw Sugar’s The Funny. Click the links for more.

Coming in from out of town via the always hilarious Actor’s Theater at Camp Bar is The Final Final Farewell Tour of Dick and Delores Rubio. From their press statements: Dick and Delores share their stories of celebrity, love, life and entertaining. From competing with Liz Taylor, wedding Elvis, bedding Donald Trump and performing in burlesque, Dick and Delores will literally charm the pants right off of you! Tickets are here.

Visual  & Literary Arts
The Stone Arch Bridge Festival is one of my favorite events of festival season, and always has tons of great LGBTQ+ musicians and artists. This year the kickoff concert happens on Friday, the 16th and the festival runs the following Saturday and Sunday. Event is free, but you can purchase lots of beautiful art and artisan work to support the local arts community.

The Dirty Queer Show is one of the best kept secrets of the Twin Cities’ Queer Arts Scene, and they are prepping their fifth and possibly final installment for June 24th starting at Noon and running all day at the A-Mill Artist’s Lofts. There’s art, dancing, and other performances and while the roster is still largely TBD their Facebook event gives us lots of reasons to wait in heavy anticipation. 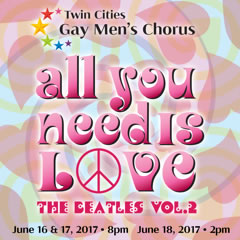 The incomparable Twin Cities Gay Men’s Chorus is going to be lulling us into a fun but serene calm with their concerts on the 16th-18th which are tributes to The Beatles’ best love songs. Appropriately, the concert is titles All You Need Is Love. Like most TCGMC shows, this one goes down at Ted Mann Concert Hall. Tickets are here.

If you love Venus DeMars even a fraction as much as I do, you’re probably pretty excited about how much more frequently she’s been performing around the Twin Cities lately. You’ll get to see her again as part of the Queerfolk Tour Kickoff which also features Sama, Elliott Sharpe, Noel Griffin, Speedweed, and the Ungrateful Little String Band. The show is FREE at the Hexagon Bar on Tuesday, June 20th at 9:00 P.M. More about the tour here.

More great classical vocal music: the One Voice Mixed Chorus is promising tons of gender bending including a lesbian pirate king (be still my heart) and the classically trained daughters as drag kings in their FREE performances of the music from Pirates of Penzance at the Schubert Club Bandshell on Raspberry Island in St. Paul. This kicks off on Thursday the 22nd at 7:30 P.M. And runs thrice more—Saturday June 24th at 3:30 and Sunday June 25th at 2:00 P.M. And 5:30 P.M. Tickets and info at their website.

Right before Pride weekend kicks into high gear we’re getting a visit from internationally recognized lesbian comedians Tig Notaro and Fortune Feimster. That statement speaks for itself—grab your tickets for this show on Thursday, June 22nd quick because they are likely to sell out.

If you can’t quite come down from your rainbow high after Pride, 7th Street Entry has some great queer indie pop music in the form of Adult Mom, free cake for every creature, Strange Relations and 4th Curtis. Tickets available here.

For a slightly different, more mellow vibe, you can catch a blues influences show of Fierce Femme Feelings—a show by Emily Dussault and Leslie Vincent. They’ll be crooning pop, folk, jazz, and Americana, getting in some duets, and each getting their own space to shine. That’s Monday, June 26th at Troubador Wine Bar at 8:00 P.M. 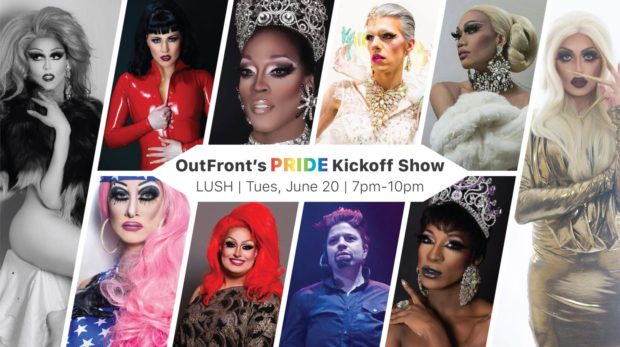 If you’re looking for great kickoff to Pride week, Lush has a killer Kickoff show on the 20th featuring Elektra Cute, Esme Rodriguez, and Kamaree Williams to name just a few of my personal favorites. Money benefits OutFront and the show starts at 7:00 P.M. Tickets are available here.

Also at Lush on the Wednesday of Pride week (June 21st) is something totally fun and funky—the Aliveness Project is raising money with a lip sync battle being judged by burlesque superstar Sweetpea among others. More information is best found here, while tickets are here.

In from out of town: RuPaul’s Drag Race superstar Latrice Royale is featuring at Flip Phone’s Pride Kickoff at Hell’s Kitchen. This one’s also got Genevee Love and Cee Cee Russell on the bill so do not miss out. Tickets here.

What would Pride even be without the Grown & Sexy kickoff that Grown & Sexy Productions gives us every year. Sweetpea and DJ Shannon Blowtorch are back as producers and features for this event. You can also catch Deviance, Dyke.s Do Drag, and the Sisters of Perpetual Indulgence! June 23rd, 9:00 P.M. And First Ave are the crucial 411 for this party and performance. Tickets are over at First Ave’s website.

The Saloon is hosting a weekend long bash over Pride weekend starting on Friday, June 23rd with musical guests Wilson Phillips. Deborah Cox will be stopping by, and there’s an old school drag show going on. More information is available here, and snag those tickets quick—the Saloon’s Pride events almost always sell out.

Grrrl Scout, the montly dance party for queer WTFs that is usually the only event in the city that can get me on the dance floor is stepping up their game this pride season. In addition to the games, dancing, and comraderie you’ve come to expect you can also see performances from Queenie Von Curves and Troop 612 among other all stars, and is hosted by Scarlette Revolver. This event, Summer Camp is on June 24th at the Cabooze. More about the event is available here.

If you’re looking to end Pride month with as much gusto as we came in with, a new variety show is moving into Icehouse MPLS on Nicollet. “Daddy” will be a recurring event but starts on June 29th with Marcel Michelle Obama, Catherine Charles, and Jenna Cis performing. Described as “Queer, subversive, weird, and full of love” this is going to be a marvelous kickoff. Grab tickets now and pack the Icehouse for this unique night of art and dancing.

OutSpoken is a queer open mic that takes place the second Wednesday of every month at the Fox Egg Gallery, and always has a rad featured artist. Past features have included burlesque star Sweetpea, noted comedian Maggie Farris, and jaw-dropping rapper Kaoz. Show is at 7:30 P.M. Seats are $5-10 sliding scale.

The second Thursday of the night is a special time in comedy here in the Twin Cities.Pssy Ctrl is an all female & queer comedy event happening at the Comedy Corner Underground. It’s hosted by Rana May and Shelley Paul and is just $7 unless you’re a student—then it’s free. No reservations, just show up!

New Sh!t Show happens every third Friday night at the Tatterwood Gallery at 1219 W 31st St. This is all kinds of storytellers, poets, and occasional musicians premiering never-before-seen work. Event is queer run and usually features at least one queer feature if not more. There’s also an open mic component, so YOU could be an LGBTQ+ artist featuring!

Please note: we’d love to include YOU and YOUR work at The Column’s Arts Calendar. Please submit events to snow.cassandra@gmail.com or . As a fun bonus, if your event is super innovative or exciting, we’re likely to reach out for a deeper feature or review.