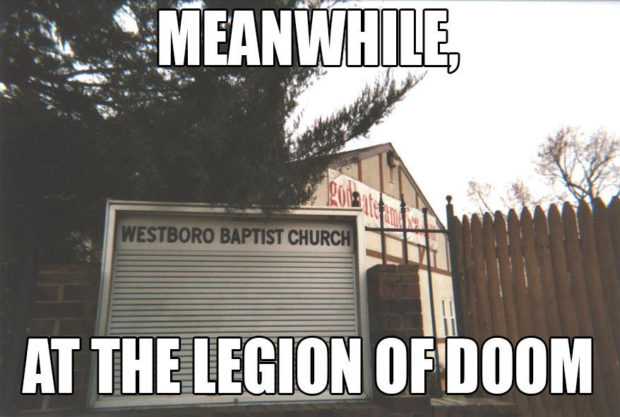 Westboro Baptist Church, an anti-LGBTQ conservative Christian group from Topeka, Kans. comprised largely of the extended family of the late-Fred Phelps, has promised to protest at three locations in Maple Grove on June 7.

School officials and law enforcement are planning for the disruption. Maple Grove Senior High School Princial Bart Becker alerted parents to the possibility of a Westboro protest in an email on Sunday night:

I’m writing to let you know that an out-of-state group plans to demonstrate on the sidewalk near our school and at two other sites in the city of Maple Grove on Wednesday, June 7. I want you to be aware of what we have learned about this activity and our response plan.

We understand that a small group from Westboro Baptist Church, based in Kansas, will stand on the public sidewalk at the Fernbrook Lane driveway entrance from 1:30 p.m. to 2:00 p.m. During these demonstrations, members typically hold signage and shout at passersby.

We have collaborated with the Maple Grove Police Department and representatives of the other affected local organizations on a response plan that aims to minimize any attention to the demonstrators while providing a smooth end to the school day.

You can help ensure that the protestors come and go without receiving the publicity they seek. We are encouraging students and families to refrain from gathering or engaging with group members in any way, including on social media.

We are committed to ensuring that all students have a successful end to the school year. You can help us achieve that goal by denying the demonstrators the spotlight they seek.

Yours very respectfully and sincerely,

The group has a history of threatening to protest locations but either doesn’t show or sends one or two protesters. For example, the group threatened to picket the funerals of those who died in the Interstate 35W bridge collapse in 2007 but did not show. Also, the group planned a protest of Hastings High School in 2011 over that school’s production of the Laramie Project. Westboro failed to show. The group did, however, show up to protest at the Minnesota State Capitol in 2013 the day after marriage equality became legal in the state.

Update: The advisors for Maple Grove Senior High’s SAGE group are encouraging students not to engage with Westboro: