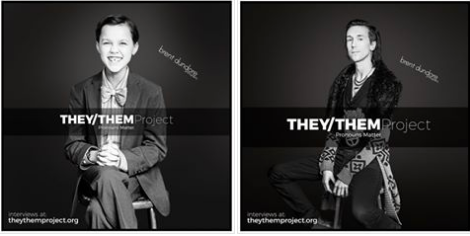 There have been some powerful photography series’ in the LGBTQ+ arts community over the last couple of years that beautifully capture an individual’s identity and struggle coming into that identity in every single shot. The Identity Project is one such project, which is a photo series that allows people to discuss the labels they ascribe to their identity as part of the prep for the photos themselves. Then, of course, there’s Leland Bobbé and his famed Half-Drag series that takes headshots of drag queens with half of their face in drag and half without, capturing the split and synthesis of one life with two identities. Now we can add Brent Dundore’s simply but stunningly photographed They/Them Project to our canon.

The They/Them Project started as a way for Dundore to address his own lack of information and misunderstandings about the trans community, particularly those using they/them/theirs pronouns. Upon shooting a subject who used those pronouns, Dundore asked a lot of questions and became interested in learning as much as possible. Once he had the photos ready, Dundore stumbled upon one that summed up the conversation he’d had with them prior to the shoot, and the They/Them Project was born.

Another subject with they/them pronouns came in to play around with an array of concepts Dundore was working on, and they and Dundore ended up spending a lot of time talking about gender and pronouns, this time with the They/Them Project in mind. From there, says Dundore, “I got great images of them, but I felt like there should be more to the project to make it more about them, showcasing what I had learned about them, and their journey to their own gender identity. Then there was another “uh-huh” moment; those conversations I was having prior to the shoot, they are exactly what I needed to better understand pronouns, so of course they would be something that could help others. I needed to document the questions I was asking, including some of the ignorant ones. Now it’s been about a month, the project has begun to take shape. It keeps adapting each time I interview someone, and I have a feeling it will continue to do so.”

Officially, according to Dundore’s website, the “They/Them Project was created to offer individuals who accept they/them/theirs pronouns the opportunity to be seen and heard, offering personal insight to anyone wanting to better understand how pronouns (and other words and actions) affect transgender individuals.” To highlight this, not only has Dundore strikingly photographed queer individuals who use they/them/their pronouns, but also offers videos of his interviews with everyone on the website as well. These interviews include the aforementioned ignorant or clunky questions so that those looking to learn more about this community can do so on the website instead of putting genderqueer or non-binary through that line of questioning in person.

Included at theythemproject.org are known local artists and activists like Chandler Daily and Bobbi Gass alongside people trying to live a quieter life. This is an ongoing project by photographer and activist Brent Dundore which means bookmarking the site to see more photos and interviews further down the road is a solid bet. Dundore is previously known for his work with Christian Dante White cataloging African-American Broadway stars and their work via the Broadway Legacy project, and for his work photographing celebrities like Kiefer Sutherland, Derrick Barry, and Fergie. You can see more of his fine work at Brent Dundore Photography.