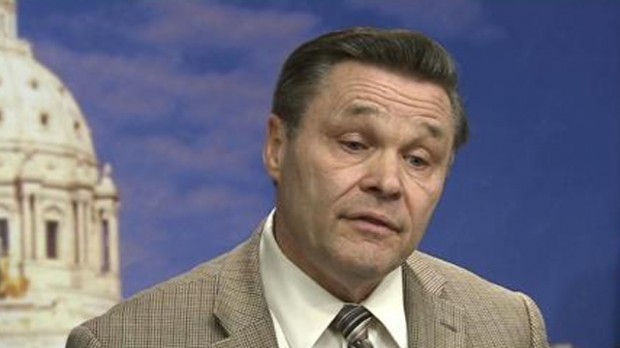 On Tuesday, Rep. Glenn Gruenhagen, a Republican from Glencoe, introduced a bill to ban transgender people from using the restroom at their place of employment as well in public places. HF2553 would also codify into law a male-female gender binary.

The bill also would impose a law on employers that would prohibit them from enacting gender inclusive workplaces and force them to label all multiple occupancy facilities as either male or female:

The provisions of section 363A.11 relating to sexual orientation as defined in section 363A.03, subdivision 44, shall not apply to the employment of any individual with regard to facilities such as restrooms, locker rooms, dressing rooms, or other similar places. No claim of nontraditional identity or sexual orientation may override another person’s right of privacy based on biological sex in such facilities as restrooms, locker rooms, dressing rooms, and other similar places, which shall remain reserved for males or females as they are biologically defined.

The bill does the same for public restrooms and other facilities:

Finally, the bill doubles down on the prohibition on employers adopting gender inclusive workplace:

“Other than single-occupancy facilities, no employer shall permit access to restrooms, locker rooms, dressing rooms, and other similar places on any basis other than biological sex.”

The bill is similar to one offered by Gruenhagen and 43 other Republicans in 2016. That bill did not advance in the GOP-controlled House. The current bill has been filed after the committee deadlines and faces an uphill battle despite a Christian conservative majority in the Minnesota House.

Rep. Gruenhagen has been one of the Minnesota Legislature’s most anti-LGBTQ members both politically and personally.

Gruehagen made the claim that homosexuality is an “unhealthy sexual addiction” in 2013. The Minnesota Legislature was poised to pass marriage equality and Gruenhagen organized a press conference with “former homosexuals” to prove that sexual orientation can be changed through prayer and counseling.

Gruenhagen has been an outspoken opponent of equity for LGBTQ Minnesotans. He recently authored a bill that would ban transgender employees from using the restroom that is appropriate for their gender. In 2011, he co-founded the Pro-Family Forum, formerly the Pro-Marriage Amendment Forum, along with “former homosexual” Kevin Peterson (In 2013, Gruenhagen announced his “former homosexual” friend on the floor of the Minnesota House as that body was taking up marriage equality).