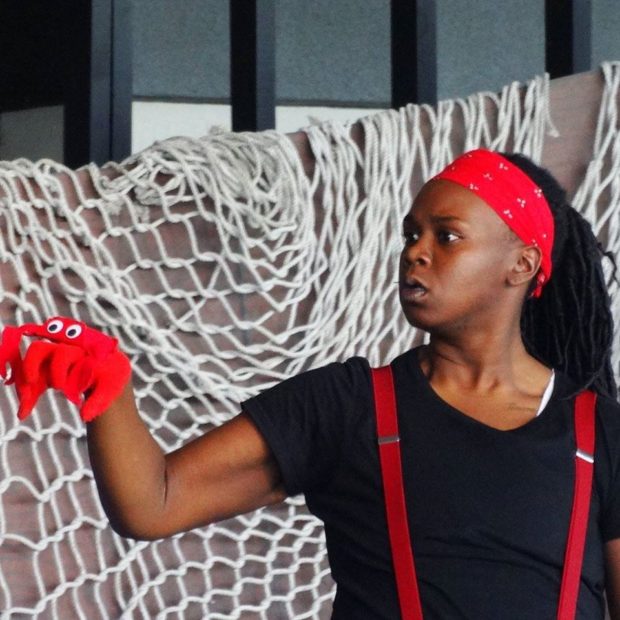 I first met Jay Simmons (he/him/his) several years ago when I cast him as several different genders and roles in a production of QUEER! For Gadfly Theatre Productions. It’s a hard show, especially when you’re still finding yourself, and he completely stole the show multiple times. Since then I’ve followed his growth as both a genderfluid trans man activist and ludicrously gifted actor and overall theatre artist — since getting his start, he’s also performed with Mixed Blood Theater and with the Minneapolis syndicate of the One Minute Play Festival, to name just a couple. A lifelong love of improv has also turned into an artistic career for Simmons in it’s own right. He is one of the mainstays of Lavender Panic improv troupe and can frequently be seen performing at improv venues around the Twin Cities. That would be enough for a lot of performers, but as an artist with an overflowing cup of creative talent and passion to give, Simmons has recently taken up drag as well and is already gaining a bit of a following performing at amateur nights and contests as Jax Hoff. Here’s more from Simmons about himself, his art, and queerness.

How do you describe yourself as an artist?
I’m an actor, drag king, improver, writer, and a semi-good dancer. I want to make black trans people not only visible on the stage but put center as much as possible.

What made you choose theatre and improv as your original medium, and what are your current goals there?
It’s a funny story, I started acting at the age of 12 because I found out I couldn’t play basketball anymore due to a leg injury. I ended up becoming extremely passionate about it, doing it through out high school and I branched out to Improv after doing a couple classes on it and teaching it in high school for a summer program. I fell in love with the stage, with pretending to be another character, and both improv and theatre have given me the opportunity to play with my gender and gender expression a lot, so it’s helped me much with figuring that out in my personal life. My current goals right now are writing a performance/visual arts piece based upon transitioning along with just (acting in) any show that piques my interest, is unique or involves people who loves the arts as much as I do.

What’s your favorite acting you’ve done on stage so far? What theatre and comedy do you love and/or what work influences you?
My favorite acting I’ve done on stage has definitely got to be playing Beta in Mixed Blood’s production of Charm. It was my first time truly playing a part that represented me as a trans man, to the T (Pun intended). I also met some amazing people during the production that ended up being some of my best friends to this day, and I found things out about my acting ability and what lengths I could go that I never knew. What work influences me is spoken word. I feel that is one of the purest types of arts. There are so many different types. and so many things you can do with it. The barrier for how angsty it can be really does not exist. And while I understand the stigma behind angsty work, I feel angsty is good, it’s a person’s true, bare feelings. It often brings out the things in society that no one wants to talk about and that’s what I want to be able to do with my work.

How has your performance style changed as you’ve transitioned? How has it changed as the political climate has changed so much over the past couple of years?
When I first started acting, I used to go for roles that were for comedic relief. While those roles are still fun for me to do, many of them don’t have much depth to them. As I’ve continued to transition, I’ve sensed the want and the need to stray away from just getting a laugh, but to really challenge people’s minds. I feel that art is the one thing that can really open a person’s mind to feeling emotions that are usually bottled up. It can make people laugh, it can make them cry, it can make them feel pain and in a society where people are so apathetic to what’s happening around them I feel it’s my duty to open them up, to make them see what’s going on in the world. That’s why I tend to go for more roles that allows me to do that, to challenge them, to MAKE them SEE the people that are suffering from injustices and to what extent those injustices are.

You’re getting into drag now, and in my opinion you’re doing awesome. What made you decide to pick up a new art form and go for it?
Aww, you’re so sweet! My drag name is Jax Hoff, I would recommend saying it out loud to see what I did there. But what made me pick it up is that I recently got into the ball scene. For anyone who doesn’t know who that is, they should see Paris is Burning. A lot of the ball scene is trying to pull off a character, and after seeing a lot of my friends getting into the drag scene I started to see the similarities of doing drag and walking in a ball. Plus, I love dancing and I love music, so it all just seemed to fit together.

How’s the drag scene been so far for you? What are some of your hopes and goals for a career in drag?
The drag scene has been amazing for me so far. I’ve met so many new people, reconnected with old friends, and it’s been refreshing to try out a new medium. It’s let me do some crazy things on stage that probably a year ago I’d never do. One of them may involve stripping down to my underwear. I’m just glad I gave it a try. In the future I hope to join a drag king group or do more duets with people. As much as I love dancing by myself, I want to incorporate other people’s styles with my routine and have fun together. I’m also thinking about throwing a benefit for my top surgery fund with a bunch of drag kings, so look out for that in the future.

Is there a through line across genres and mediums in the message in your work?
Yeah, black trans lives matter. I can’t say that in simpler terms. We’re here, we exist, we’re not going away anytime soon and people better get used to seeing us. Even when I’m not doing a show based upon my identity, it’s still very much about that and the strides were making into the world of art, theatre, etc. For instance when I played Sebastian in The Little Mermaid, of course the show wasn’t about any my identities, but I still was the first transman to play Sebastian. That’s still crazy for me to think about, but it’s showing strides are being made in the theatre world for people like me. Don’t sleep on us.

What events do you have coming up? How else can we support you?
Upcoming events: Hair – Opening April 21st at Century College; I’ll be playing Hud.
Drunk Queer History – March 1st with Gadfly Theatre
Look out for shows with my all queer improv troupe Lavender Panic! You can also find Lavender Panic on Facebook.

Anything else you want to say about art, life, queerness or anything else?
Support, support, support your local artists. Especially support your local queer POC artists, ESPECIALLY queer femme POC. With how our political climate currently is and how our government is being run, the society that was already set against queer POC people has tripled in danger and now especially is the time to come together, look past yourselves and your own comfortability and support communities that aren’t necessarily your own. Allyship is key in this hard time.