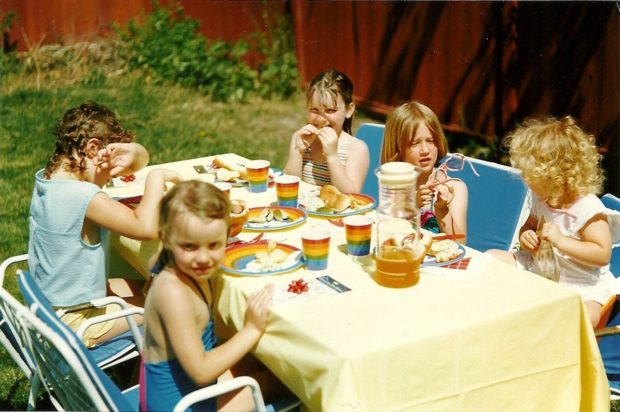 Can one event, major and traumatizing as it may be, shape your entire identity? How do you process such events, move on, and grow while grappling with issues of identity and loss and how wrapped up and mixed together they may be? These are the issues at the heart of 20% Theatre Company’s production of FIVE, written by 20% Artistic Director Claire Avitabile. While Avitabile is widely known and respected for her work at the helm of both 20% and Sabes Jewish Community Center in St. Louis Park’s performing arts program, she has always considered herself a writer as well, and has written quite a few memoir style stories and autobiographical pieces. FIVE is a different experience entirely though — not only is it Avitabile’s first full-length play to see production, but it mixes theatrical format with movement pieces and other mediums to form a cohesive story about addiction, identity, loss, and letting go.

Avitabile states that “the main focus of FIVE is one woman’s struggle to overcome great pain due to her father’s substance abuse, life-long neglect, adultery, and his leaving her and her mother when she was five years old, but ALSO her realization and acceptance that her struggle does not define her.”

The subject of FIVE is obviously incredibly personal. I know I’ve dealt with many of this story’s elements, and countless others in the queer community have too. Avitabile set out not only to tell her own story, but to present a relatable piece about those struggles and, seemingly, to offer some hope and insight into the moving on and growing up process. FIVE also hits on queer identity in a unique and important way. The show delves into “one idea that many queer individuals don’t ever want to consider, which is: what if this loss, or this awful experience, is what ‘made me queer?’” Avitabile says. 20% Theatre Company is no stranger to hard questions and examinations of the self, and this show is no exception. While ultimately this story seems to be one of examination, empowerment, and relief, I’m interested to see how the show handles this particular question.

One of the things I’m most interested about regarding 20% Theatre Company’s FIVE is the use of movement and Avitabile’s writing roots in memoir-style pieces to create this story. 20% really shines when it comes to theatrical innovation, and I was eager to gain some insight into how the show was shaped. FIVE is a devised work, which can and does mean different things to different producers. In the case of FIVE, the cast got together with Avitabile and Co-Director Shalee Coleman and used Avitabile’s collection of stories and previous writing’s that she wanted to use for show. They filled in the rest via exercises and their own writing in a collaborative creative process. Briana Patnode plays the main character, and the rest of the cast is designed to be a tight ensemble, each playing a variety of roles. Those roles include pieces of the main character herself, various roles from the character’s memories, and at times, they play even themselves or pieces of themselves. That cast is comprised of Pearl Noonan, Meagan Kedrowski, Kathryn Fumie, and Beckett Love. This method of show creation allowed this slew of talented actors to use their ample writing and various other creative talents too. Because Avitabile went into this process knowing she wanted to tell more than just her story, this process also allowed for everyone’s experiences and story to mold the show further. “I believe all of us in the ensemble relate to the subject matter personally, either the experience of queerness or of dealing with addicted loved ones,” says Noonan, echoing Avitabile’s sentiments about how much of themselves cast members brought to the table.

Co-Director Shalee Coleman led the exercises and composition work that would form the movement pieces. Coleman is known for her poetic theatrical style, and this seems a natural fit for her work. It sounds like a wonderful complement to the more monologue-driven scenes. While FIVE utilizes various types of performances, it’s easy to see how the story of an adult child of an alcoholic fighting her right to her identity and rebirth forms a single story. This idea of using traditional theatre and subverting that, adding to it, or otherwise shaking it up is a direct homage to queer art as it’s succeeded and evolved over time. Avitabile is not alone in noticing that art and queer communities are looking for fresh ways that stories are being told, not just fresh stories themselves (though that is certainly a crucial component).

20%’s audience has learned over time to come into their shows expecting something different than the last time, and frankly, as a frequent 20% audience member, different than most things you’ll see on a Twin Cities stage at all. The company is never averse to trying new things and taking risks, and FIVE fits right in, in that elsewhere, it may not have fit in. Coupled with the show’s in-depth look at the long-lasting effects that children of alcoholic and/or negligent parents face, FIVE is sure to strike both new and familiar cords with its audience. As I’ve been working on this article for the past several days, I’ve been searching my brain for theatre pieces that hit as hard on similar topics but still seem to offer a feeling of strength and hope to those viewing it. Few came to mind, and even fewer with queer content and creators came to mind. I am perpetually interested in how a queer lens changes and shapes even the most well-known stories, and Avitabile making that lens one of this show’s cruxes is another bold choice that I am excited to see play out in the show.

It’s no secret that being queer often creates hardship due to societal oppression — that’s the entire foundation of our work here at The Column. One line of questioning I still can’t believe doesn’t sit at the core of more art that this show seems to drive at is “What happens when you’re queer and find yourself in further situations that are already difficult and traumatizing?” Personally I’ve often felt those situations have left me dealing with major issues related to identity and self almost as a back-breaking straw in the pile of stress instead of it’s own struggle. Those issues often then don’t get their proper due in your brain space, and it can add exponential pain and time while you figure everything out, all while trying to heal and function as an adult. These are incredibly difficult things to process for yourself, let alone to process via performance. It takes an extraordinary amount of bravery and vulnerability.

Cast member Pearl Noonan echoes this, saying “I’ve been most impressed with the level of vulnerability that Claire has brought to this project. She has really lain bare not just difficult moments from her personal life but also the sort of winding and non-rational emotional processes that result from dealing with traumatic events, from trying to make peace with unresolvable questions. It’s not just ‘this is the bad thing that happened to me’, it’s ‘this happened and here is how I’ve tried to grapple with it for decades.’ That’s a lot to share with an ensemble, not to mention an audience.”

I am thrilled to hear about the tactics FIVE uses to broach such intense and necessary subjects, and as someone both guilty of occasionally producing and loathing of shows that end up with miserable or dead LGBTQ+ characters, I’m even more thrilled that no matter what I asked Avitabile about the work, she seems to keep coming back to this point: “Your struggles are yours, but they do not have to define you. You do not have to be the struggle forever.” You do not have to be the struggle forever, and FIVE is providing insight into healing and a necessary catharsis for so many.

FIVE opens on November 11th at Dreamland Arts. Dreamland is a venue with very limited seating, and the show is only running through the 20th. In other words, grab your tickets, available here now. For more about 20% or other upcoming events, visit http://tctwentypercent.org/