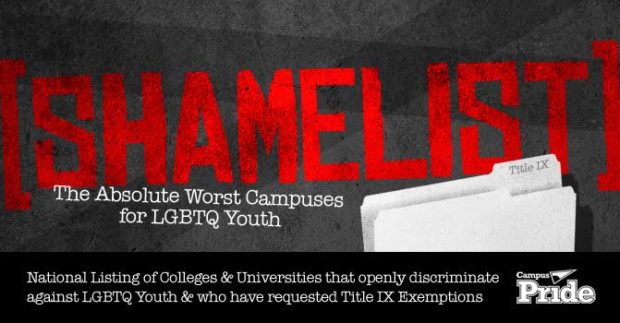 Two Minnesota schools have been added to the “Shame List” of Campus Pride, an organization for LGBTQ college students and campus LGBTQ organizations. Crown College in St. Bonifacius and the University of Northwestern in St. Paul are schools the group found to be the “absolute worst for LGBTQ youth.”

Campus Pride used several sources to determine a school’s level of anti-LGBTQ animosity. Many of the schools on the list — which is over one hundred schools — have applied for a waiver from the federal government to discriminate against LGBTQ students while also receiving federal aid and grants. Others have policies in school handbooks that call for the expulsion of LGBTQ students or have engaged in anti-LGBTQ advocacy.

The University of Northwestern has requested a waiver from the federal government. In a letter to the Department of Education Office of Civil Rights in February 2016, the school asked for an exemption from Title IX so that it could discriminate based on both sexual orientation and gender identity. That letter states, in part:

UNW affirms that sexual relationships are designed by God to be expressed solely within a marriage between husband and wife…. Additionally, UNW believes that we are created by God in his image as two distinct sexes — male and female — and believes that each person glorifies God and affirms His infinite holiness and wisdom by living in alignment with his or her birth sex. While we acknowledge there may be confusion and brokenness for some individuals in this area, we do not affirm or support transgender identity or expression. UNW requests that your office acknowledge that the University is exempt from Title IX and the following implementing regulations (to the extent they are interpreted to reach gender identity or sexual orientation discrimination, and the the extent UNW’s freedom to apply and enforce its beliefs and policy regarding abortion)

In May 2016, Crown College issued a letter to the OCR stating the school will continue to discriminate against LGBTQ students, faculty, and staff:

The College, in service to the Church, welcomes those of professed Christian faith who experience same-sex attraction. But, it also affirms with the C&MA that sexual activities with members of the same sex are sinful and are not to be condoned as acceptable expressions of one’s sexuality. … It appears as though compliance with Title IX, if interpreted by OCR to reach sexual orientation discrimination, would also be inconsistent with the theological commitment of Crown College.

Compliance with Title IX, as interpreted by the OCR to reach transgender discrimination, would be inconsistent with the religious tenets of the College.

Crown and the University of Northwestern are among eight anti-LGBTQ colleges and universities operating in Minnesota, according to a report by the The Column last year.