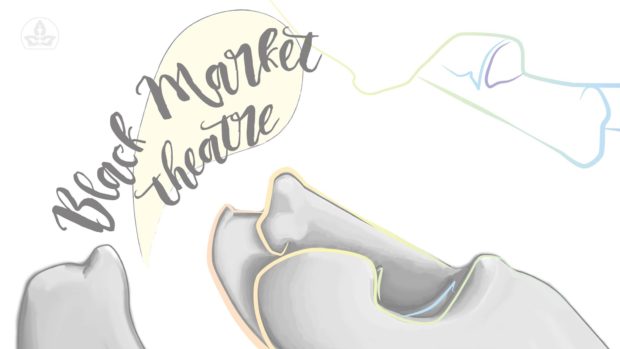 New theatre companies, collaborative work, and of course anything that calls out queerphobia or heterosexism are all things I have a deep, abiding love for. As such, I was thrilled to be contacted by Meagan Kedrowski, a long time theatre friend of mine about Black Market Theatre and their inaugural show Slate. I was a little iffy at the onset because theatre for theatre people is one of my biggest pet peeves (a quite unpopular opinion in my crowd), but I trust Meagan’s word and was intrigued to see how a show about auditions and the foibles of theatre. One that incorporated larger messages like calling out an entire field for not finding room for genderqueer people or the class divide that, coupled with a lack of support, could crush a new artist.

Slate, in Black Market Theatre co-owner Andrew Jacobsen’s own words, “is a collaborative work created by a cast of four artists/performers. The show illustrates the struggles that ‘career artists’ face in a modern age. We follow the cast of four through an audition process that is just “another day at the office” for our cast of characters. We get to see the “masks” they put on (or the masks that they don’t put on) as they cope with the internal struggles that they face such as, economic hardship, lack of fulfillment, endurance of discrimination and the infamous limbo period between auditions and callbacks.”

It stars Meagan Kedrowski, Kelly Nelson, Brandon Jackson, and Nicholas Kaspari who each played a heightened version of themselves often presented to their theatre peers.

Slate is a new show by a new company, and as such there were a few expected hiccups on opening night. I am not one who needs my theatre to be pristine (quite the opposite actually), but I did notice some cue pick-up, energy, and transition issues especially in the first half. Additionally, my aversion to “theatre for theatre people” was not QUITE overcome. While some of the stories will affect people in any medium (Kaspari’s need to work in the field he loves so much and Kedrowski’s struggle to find a presentable version of a genderqueer identity most notably), some of it will be lost on people who are not theatre people or theatre adjacent.

That being said, as far as “theatre for theatre people” goes, or even art for artists, Slate is a worthy addition to the existing cannon. I strongly preferred it to other more well-known works in this genre, and even theatre fans who aren’t involved themselves will be interested to see how many conventions Slate not only questions but openly breaks. Meta theatre is incredibly divisive (and for good reason), but done well it’s incredibly effective. Slate is done very well, overall.

When I set out to write a review, my biggest questions are: “Is it clear who this show is for? Why it is being done? Was it effective in its mission?” I think it’s clear from what I’ve written so far who the show is for, and when your audience is that specific, the “why?” is crucial. This “Why” really resolves my concern about the genre in a lot of ways. If you’ve ever seen A Chorus Line (which this show was clearly influenced by — that is not a judgment, just a reference point) we know that auditioning is hard, and that actors really have a hard job not only once cast but even getting to that point. Instead of beating this point home, which most audiences don’t need by now, Slate goes an immeasurably important step further by calling out the rigid boxes and “types” producers and directors put actors in and calls us to question our own biases as a result. These are very human stories about questioning where you fit in — if at all — and learning to accept rejection, and for those of us who are theatre or performing arts proficient, I do recommend seeing it.

All of that being said, there is one area where Slate completely knocks it out of the park other than the tugging of the aforementioned heartstrings: the talent and bravery of the ensemble. Theatre is a hard field, and actors’ struggles go unheard or unspoken of even within that field. Being an actor at all is a brave, defiant act in a culture that overlooks you, sees you as “a dime a dozen” and underpays you (though usually not by choice). What is even braver is doing a show as a hyper-realized version of yourself and calling in your peers from stage and this cast really bares all in a way that feels genuine, honest, and never over the top.

The four stories are roughly as follows: Kedrowski is a genderqueer actor constantly having to decide between angling more male or female during auditions, when neither feels quite right and both feel restricting. Kedrowski is as charming and talented as usual, and seemed the most comfortable wearing his heart on his sleeve. I never felt overwhelmed in a negative way by the emotion in this story, nor did it feel simply didactic. I never for a moment doubted this was a real struggle for him and an intimate part of his life we were being let in on. I thrive on that kind of intimacy as an audience member and it’s the type of story and caliber of performance that makes me grateful to be working in this community. It’s also exactly what many Colu.mn readers and myself are looking for when they hit the theater, and it does hit all the right notes for that.

Nelson is equally fabulous in a story about not letting your anxieties get the best of you and overcoming each time. It’s pretty straightforward, and beautifully done (I have another point to discuss about the show overall and have more about this performance then). Kaspari just wants to work for the sake of the work he loves so much, though his increasing frustration with not being able to understand the business or what makes a good audition sometimes gets in the way. This was the one “character” I felt I wanted or needed more from. Kaspari IS as good a deviser and actor as the other cast, but I do feel unfulfilled by this story. Kaspari’s talent and what is there is more than enough to pull us in and keep us invested, I just don’t think that investment fully pays off.

Jackson (the breakout star among an already solid cast) is jumping into the audition the show is set around pretty blindly with no training or experience to fall back on. Jackson’s gender is presented as fluid as well, though his bigger struggle to fulfill a life-long dream while staying true to who he IS is a much bigger part of this story. Jackson’s story is bittersweet as it features a family who is never quite accepting but a role that’s a dream come true coming to fruition. Honestly when I think about Jackson’s story and performance, words fail me. He is that good, that endearing, that saddening, that wonderful. Every moment he takes center stage is magic. There is not a weak link in this cast, acting wise, but Jackson’s performance is what makes good theatre great.

The show features songs you likely already know if you are in Slate‘s target demographic. Popular Broadway hits from Roger and Hammerstein and newer breakouts like the Waitress soundtrack both have their time. I’m not super qualified to harbor judgments on musical talent, but though there were a few off moments, I have a feeling by the time this next weekend hits they will have resolved this. The music serves a clear, important intention and is not simply for flash factor. Nelson, for example, really dives into the “meat” of her story once we see why we don’t see her sing — until we do. She knowingly does not have the strongest voice. Her song choice and the way she sings them are chosen on purpose, and become a vital part of her story. I talked about how brave the actors on this show are — and in addition to dissecting their own fears and gender and everything else, Nelson does a brave thing rarely seen in theatre. She takes her weakness and insecurity and she belts it out for us anyway, bringing most of us and herself to tears. We watch her tear herself down over something that is a small part of an otherwise stellar performance, and it breaks our hearts like it does hers. Nelson says more with a heartfelt but shaky key change than some more seasoned singers could ever hope for. It’s raw, and it’s these raw moments that make Slate so good.

Slate is really funny in places, so if all this talk of heartbreak and bravery turns you off, don’t worry. The actors are having as much fun as they are providing more serious emotional fodder. For those in the arts, this is a great show with a lot to chew on afterward. For everyone, in spite of my initial reservations (some of which held up), the show has some lovely music, some truly heartbreaking moments, and does tackle issues that, though they manifest specifically in this show where theatre is concerned, do speak to ongoing conversations about gender identity (and making sure we welcome genderqueer people in our fields), the role of art in our lives, and handling insecurity with grace.

Slate performs for one more weekend — the 21st through the 24th at Phoenix Theater in Uptown. Tickets are $11 (which is a really fair price for such a good show). Full show schedule and tickets available at www.blackmarkettheatre.com.