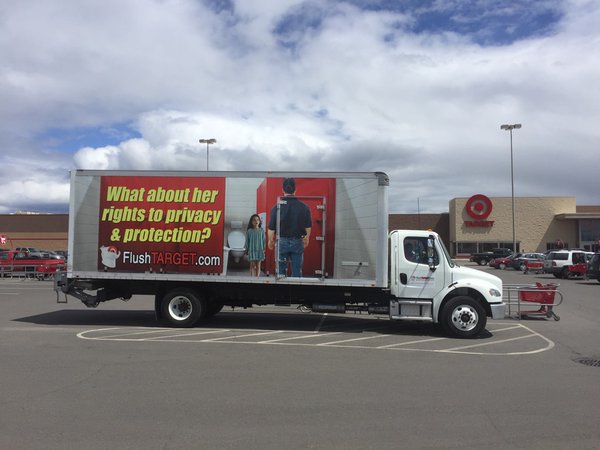 The Child Protection League, a group that opposes LGBTQ rights, rented a truck with LifeSiteNews, a propaganda website for ultra-traditionalist Catholic theology, after Minnesota billboard companies refused to sell the duo an anti-transgender billboard for their Flush Target campaign.

Claire Chretien, national spokeswoman for LifeSiteNews’ #FlushTarget campaign, told the news outlet she works for — LifeSiteNews — that Minnesota ad agencies declined to do business with the two groups.
“We had to resort to using a billboard truck to get our message out after every billboard company in Minnesota turned down our advertisement,” Chretien added. “It would seem ‘political correctness’ has now trumped ‘free speech’ even in the advertising industry.”

The Flush Target campaign takes aim at Target’s recent announcement that it does not discriminate against transgender and gender non-conforming customers and employees. The MNCPL and LifeSiteNews appears to be attempting to capitalize off of the American Family Association’s boycott of Target.

The religious right duo have also enlisted the help of veteran culture warrior Andy Parrish. A former staffer for former Rep. Michele Bachmann, he also served as campaign manager for the unsuccessful attempt to ban marriage equality in Minnesota. Parrish ran press for the Flush Target truck unveiling at the Minnesota Capitol on Monday.

The publicity event held at the Minnesota Capitol on Monday featured MNCPL’s Julie Quist and Republican Rep. Glenn Gruenhagen. Neither are strangers to making factually challenged assertions about LGBTQ people.

In April, Quist appeared on a radio show in western Minnesota where she demonstrated a lack of knowledge about the basics of sexuality and gender. She also simply made some things up.

Gruenhagen has a long history of inflammatory rhetoric about the LGBTQ community in Minnesota, including producing a video that claims that HIV is transmitted through sweat, and that viruses spontaneously blink into existence in people’s digestive tract.

“Send Target a message — don’t shop where women and children’s emotional and physical safety and privacy are under assault,” Quist said at the press conference according to WCCO. Minnesota Public Radio has more: “The Target mixed-bathroom policy is not about solving a problem, it is about taking the wrong side in a massive cultural assault on women and girls,” said Julie Quist, board chair of the Child Protection League. “Voyeurism, exhibitionism and stalking are well-known public concerns most commonly directed at women and children.”

The Flush Target campaign has a website where anti-LGBTQ people can go to cut up their Target cards, sign petitions, show up and protest at Target stores, and even rent a Flush Target truck.

In an article on her employer’s website, campaign spokesperson Claire Chretien made some errors of fact about basic biological science.

“Every species consists of males and females, but it seems the most intelligent species has forgotten this,” she said.

She is, of course, completely wrong. Many plants, protists, fungi, and bacteria do not have male and female forms, and there are plenty of examples in the animal kingdom of species with no males, species where sex changes over time, and species that are both sexes at the same time.