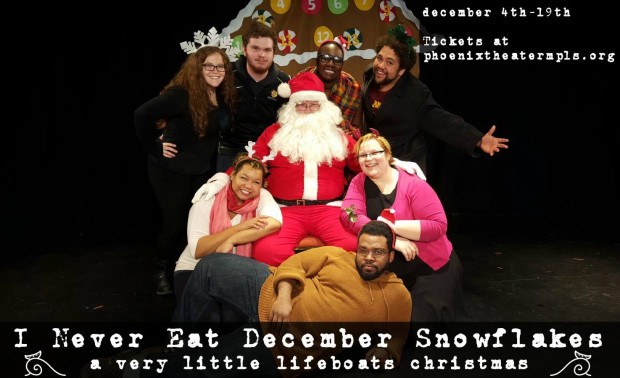 Little Lifeboats is one of my favorite peer theatre companies in the Twin Cities. They annually put together Tease: The Easy Access Script Experience, which serves as a chance for artistic directors to connect with new local writers as well as see what the actors and directors involved can do. They have also produced new shows, many provocative in nature, nearly all excellent. They excel when it comes to creating art, and they excel when it comes to being allies to the queer community and people of color.

The company itself is run by amazing feminists. I see most of their work, but I was especially excited to review I Never Eat December Snowflakes. Back in October, I had the joy of seeing an out of town show by the Neo-Futurists called Too Much Light Makes the Baby Go Blind. The Neo-Futurists have a really wonderful philosophy and specific way of making theatre. Much of it is not relevant to this review, but one of the best things about it is the format: they attempt to do 30 shows in 60 minutes, so essentially you’re being treated to a plethora of roughly two minute plays. This means there’s something for everyone, and if you don’t love a piece, oh well. It’s done in roughly two minutes. The spirit of the show calls for audience participation, is incredibly fast paced, relies on strong ensemble work, and stretches how we think about story-telling and theatre.

I Never Eat December Snowflakes by Little Lifeboats takes this innovative art form and makes it their own, lengthening the show to 90 minutes (and 40 attempted plays.) In this format and style of performance, the audience receives a list bearing the names of the shows, and yells out the number they want to see. The ensemble grabs the number they hear the audience shout from a board/clothesline/et cetera and performs it. The hope is to get through all the pieces, and part of the fun is knowing that between the vamping in between plays and other x-factors in such a stylized setting they may not get to them all. Little Lifeboats did this as their holiday show this year, and as such the numbers were attached to a giant cloth gingerbread house.

I Never Eat December Snowflakes plays with theatre convention beyond the show’s unique format in this piece by adding not just short plays, but games and improv as well. This is not unusual in a show that expects audience participation and keeps up a fast pace, but was exceedingly well done. They also added music in, so one number was an unexpected break where we were just sung too. This was one of the only things I didn’t love — to my recollection there was only one such number, which made it a little confusing and out of place. The performance was lovely, so that’s not the issue, but I think adding more solely musical interludes or taking them out completely would have made this choice a lot stronger. There were other musical pieces, but they were parodies or pieces of larger things. What made the improv, game-based, and “miscellaneous” pieces so strong was that they were generally proportionate in numbers to the scripted pieces. 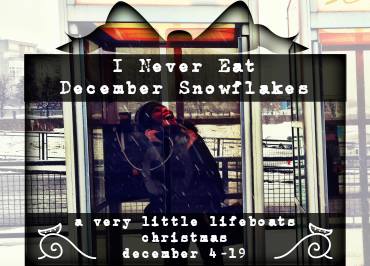 I love, love, love that Little Lifeboats created a show in this style but made it totally their own — one thing I desperately missed though compared to similar shows I’ve seen was having some more hard-hitting or dramatic pieces. With 40 pieces to choose from, I could count on one hand the number of dramatic pieces, and even some of those didn’t dig super deep. That’s not to say all of the comedy was fluffy, and in fact some of the darker comedies where some of the most successful pieces. There is still a distinctive contrast in emotions missing that would have made I Never Eat December Snowflakes even better.

Beyond these two minor notes, this show is really, wildly successful and entertaining. It’s a holiday show that even Grinches will love for it’s humor and take on holiday entertainment. It is lacking veiled religious subtext that turn so many of us off to the normal Christmas fare, unless when it is openly and fairly criticizing that piece of our holiday culture. It’s incredibly warm and heartwarming in places, but never in a way that feels fake or for-the-holidays only. The heartwarming pieces come from a place of “These are how these characters exist, and it happens to be a winter holiday,” which is really refreshing this time of year. On the flip side, the show is not without it’s cynicism about how overdone and false many holiday traditions are. To me this is much welcome, but for those who don’t do well with cynicism, don’t worry. It’s not enough to be grating, is generally over in anywhere from one to three minutes, and they don’t really dip into territory that isn’t common thought about the egregious fanfare that happens each December.

Shows like this require a strong ensemble to work, and show runners Erin Denman and Victoria Pyan did an amazing job assembling this one. Eric Aufderhar, Alsa Bruno, Joy Dolo, Connor Duffy, Eli Effinger-Weintraub, Matthew A. Everett, Starla Larson, Abby Swafford and Duck Washington fill out the cast and writing team. They don’t all perform in the piece, but they plays are all well-prepared, and that sense of community that makes or breaks a show like this is ever present. The actors are incredibly strong, particularly in the improv pieces which can be some of the more challenging. More important to a show like I Never Eat December Snowflakes is how well they play off of each other, and this is one of the best things to watch in the show. You can tell this show was so fun to put together, and a true bonding experience among performers which made the audience feel really engaged and invested in return.

For those who want to know what to expect from a show built out of 40 smaller shows, I’d go in with minimal expectations. This is a really magical show where anything can and does happen, and since several of the pieces are improv based, it is different every night. One of my personal favorites was entitled “Kwanzaa,” in which Denman and Pyan, two white girls, come out in satirical white savior mode to “educate” us about Kwanzaa. They are immediately cut off and shooed offstage by the rest of the cast, all people of color, making a hilarious but bold statement about what allyship does NOT look like. I was also a huge fan of an improv based play where the audience tells the cast their favorite Christmas story, and they improvise a scene based on that. I don’t want to get your hopes up for a “Crumping Krampus” like the night I was there, but the actors in that scene are so strong that I’m sure it will be just as good. A more traditional “play”, of which there were many was a series called “Pitching Christmas” in which Denman and Pyan try to talk each other into various Christmas shows, most of which are horrible ideas. It was entertaining while also casting subtle, much needed shade at companies that do not get creative (or go too far) for the holidays. There are several pieces that expertly critique popular holiday fare by parodying them, or in the case of “Critique”, openly questioning our blind acceptance of an awfully conceived but popular Christmas song.

The Column readers will be delighted to see local LGBTQ* playwrite darlings Eli Effinger-Weintraub and Matthew Everett’s names on the writing team, and the pieces that were credited to them during the show are very strong and span a variety of identities and types of couples. Little Lifeboats regularly does a great job at diversity and inclusion, and this show is no exception. They go a step further in aiding marginalized people with this show, as one of the pieces called “Giving Tree” allows a cast member to step out and promote a non-profit of their choice and raise money for them. Take cash when you go! I did not, but did I go home and make a small donation to YouthLink, which was featured that night. OutFront Minnesota is also on the list of groups Little Lifeboats is supporting.

I Never Eat December Snowflakes is a great holiday show because it takes everything you expect from a holiday show and subverts it, but still leaves you with a sense of joy and cheer. Part of this comes from how hilarious the show is, but a huge part of it comes from the familial environment the company creates onstage and off. It’s also a great place to go with a ton of people who all like different things, as while this show could dig a little deeper in the dramatic moments, it still has something for everyone. Little Lifeboats has added an amount of quirk that is necessary and never cloying in comparison to your standard holiday entertainment, and they have taken an already innovative format and filled it with top notch local talent and fresh ideas. I Never Eat December Snowflakes performs at the Phoenix Theater on Hennepin Avenue in Uptown as part of the Phoenix Theater’s “Up Your Chimney” Alternative Holiday Festival. There are two more performances, Thursday, December 17th at 7:30pm and Saturday, December 19th at 5:00pm. Tickets are available at Phoenix’s website or at the door.