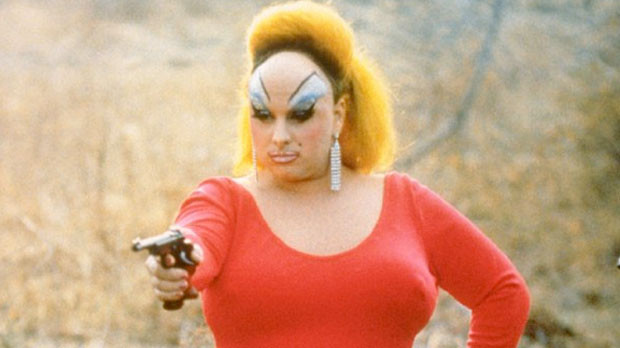 Divine, the iconic drag persona created by Harris Glenn Milstead and made famous through the films of John Waters, came to Minneapolis in 1983. But before she even landed in the Twin Cities, the welcome mat was pulled out from under her.

The event was scheduled for Friday, August 10, 1983 at the Prom Center in St. Paul, but when the Prom Center realized who they had booked, the venue backed out. The Prom stood at University Avenue and Dunlap Street from 1941 to 1987, and hosted many Twin Cities events, including, not surprisingly, high school proms.

Tuesday, August 16th, it’s Divine At The Prom. Divine, reigning queen of camp, has starred in such movies as John Waters’ Pink Flamingos and Polyester, as well as off-Broadway theater, in Women Behind Bars. Robbie Leslie, D.J. at Manhattan’s premier gay disco The Saint, will be providing dance music before and after Divine’s performance. With the Prom Center’s 11,000 square foot dance floor and Robbie Leslie mixing, “Shake It Up” seems appropriate. . Divine’s 1983 tour highlights her album Jungle Jezebel, which includes the songs “Native Love” and “Shoot Your Shot”, the single of which has attained gold record status. Divine has also recently released a new single, “Shake It Up.” At the end of her current tour, Divine is to begin work on two new films. . . Beverly Hills, directed by Greg de Santis, and a John Waters production in which she will play triplets. Doors will open at 9 p.m. Tickets are $10 in advance, $12 at the door, and are available at March 4th, Savoy Nu-Look, and all Music 2 and Dayton’s locations. For more information call 471-7431.

Here’s the original add for Divine’s show that appeared in the gay press in 1983: 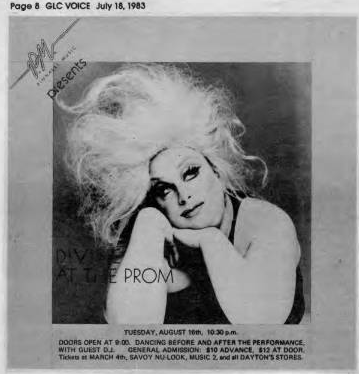 Tim Campbell, the editor of the GLC Voice, delighted in the irony of Divine scheduled to play a mainstream space, only to have the performance cancelled:

There was something deliriously perverse about the notion of Divine performing at the Prom Center. On the one hand, what could be more symbolic of the mores of the 50s than a dance hall created primarily to introduce high- school youngsters to the wonders of heterosexual dating? But then on the other hand, who could be more symbolic of the assault on those mores perpetrated through the 60s and 70s than Divine? Divine, 325 pounds of man made woman. Or better still, 325 pounds of female fabrication.

Campbell recounted how the Divine appearance got cancelled. According to some sources, the St. Paul Daily Dispatch entertainment desk alerted the Prom to Divine’s style of performance. Other rumors had it that it was social conservative Christians who applied pressure. That rumor seemed to have a hint of truth, Campbell wrote:

{Event manager Dick Clay} maintains that the Prom Center is not prejudiced against the gay community, pointing out that they rented the hall to the Halloween Drag Ball sponsored by the Gay 90’s in 1980. Clay admits that they cancelled the ball in 1981 after having booked it. “When we get a chance to rent the Center to people who are going to be eating steaks as well as having a few drinks, of course we have to go where the money is.” When pressed to explain how .the Prom Center distinguished a drag performer from a drag ball, Clay fell back on the argument, “This is a family owned business. We have the sole right to determine what goes on in there.” Henry Given, owner of the Prom Center failed to return our call but told the St. Paul Pioneer Press this in justification of their act: “If the Guild of Catholic Women, who dine here, found out about that kind of business what would it do to us.”

An editorial cartoon appeared in the GLC Voice, mocking the decision to cancel Divine’s performance: 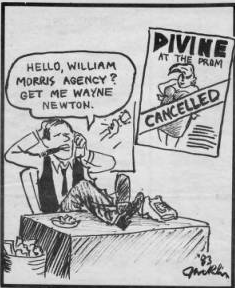 After the Prom backed out, Duffy’s in south Minneapolis added Divine to their event calendar. Duffy’s was located at 26th Street and 26th Avenue where the New French Bakery currently sits. The area was known as the Hub of Hell for various reasons including a growing hardcore rock scene in the 1980s, a reputation for organized crime stretching back to the 1910s, and labor riots that turned deadly in the 1930s. City Pages’ Joseph Hart gave a rundown on the Hub of Hell rumors in 1997: “The Hub is a treeless little pocket of stubborn urban blight in the otherwise bustling Seward neighborhood,” he wrote.

Duffy’s added a second performance by Divine; her shows were Aug. 17 and 18 instead of the 16th, and Duffy’s dropped the ticket price from $12 to $9 to make up for the Prom’s cancellation. Duffy’s also added the all-female feminist band Têtes Noires, and Manhattan DJ Robbie Leslie known for his sets at Studio 54, the Saint, and the Palladium.

Here’s the only photo of Divine in the GLC Voice in 1983. It appears to be from the show at Duffy’s: 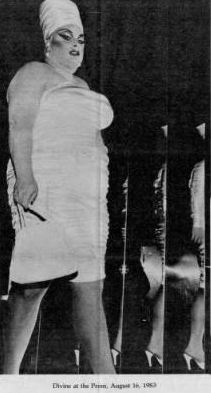 Divine had come to Minneapolis before. She hosted the 1982 Valentines Empress Ball on Feb. 14 at the Hyatt Regency Grand Ballroom on Nicollet Mall. The event was a costume ball, and the Minneapolis event was the world debut performance of her single “Native Love.”

This ad in the GLC Voice touted the event as the “most outrageous social event ever.”: 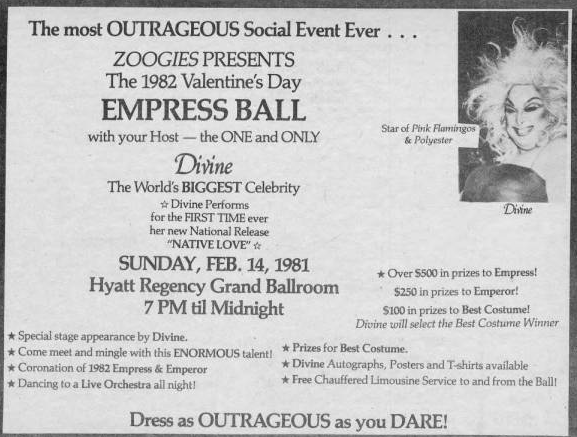 The Voice followed up with a photo from that show: 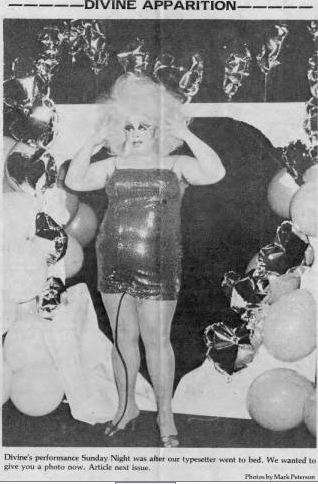