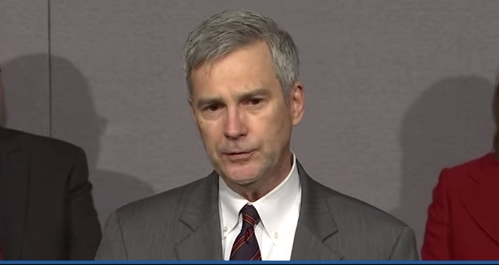 At the Minnesota State Fair, Sen. David Hann, a Republican from Eden Prairie, dropped by the booth of conservative Christian radio station AM 980 KKMS to talk about the issues of the day. The conversation for most of the segment was devoted to the Safe and Supportive Minnesota Schools Act, an anti-bullying measure passed into law in 2014. Hann called it a usurpation of parents rights and part of the “pro-gay agenda.”

Ridgeway: Senator, Mark is a listener in Eden Prairie said what is the consequence to schools as a result of the bullying bill that was passed?
Hann: well I think that this was a controversial bill that was passed when the Democrats were in the majority in both the House and the Senate, and what it was was an attempt to do something — I have that in air quotes — about bullying and everybody of course knows that bullying is not a good thing. We all abhor it when it happens. A lot of kids grow up have the experience being bullied, probably far too many, but the question really came down to who should be in charge of managing that problem and every school district around — it goes back to kind of the: where do we want school districts or where do we want schools managed? Do we want them managed at the local level or do we want them managed in St. Paul? Every school district had policies about bullying and had practices put in place to address those and since then we passed at the state level something that basically set all that aside, overruled it, put in place some things that frankly were controversial and I think as we’ve begun to implement that, what we are going to find is that there are going to be school districts who implement policies because they were trying to conform to what the state law required and there are local parents that are going to be very concerned about some of the things that are going to be required. It’s one of the questions of how do you define a bullying activity? Is it if you say something that someone finds offensive? Is that bullying? There’s a lot in the definition and those things need to be dealt with, I think, in a way that is respectful and also needs to be the expectations of the community and I don’t think putting in place what we did at the state level meets that.
Ridgeway: Well I think also a lot of people admit that it was part of the whole gay agenda on this whole bullying issue.

A few minutes later, a called asked a similar question:

Caller: I have a question for the Senator. Why did you vote for the bullying law? Bullying is certainly a liberal agenda. First of all, how would a young man ever join the military if he’s never been bullied ever in his life?
Ridgeway: Sen. Hann opposed this whole thing by the way. Senator, you want to answer that?
Hann: We fought against that. In fact, the first time they tried to pass it, we had a very, very long debate. It was right toward the end of session we actually persuaded the Democrats in the majority not to bring it up for a vote, because we said if you bring it up for a vote we will debate this thing the rest of the night. You won’t have time to pass your tax bill. So we did that in the first year of the biennium when the Democrats were in charge. We got it delayed for a year, and we wanted to do that so that the public would be able to understand more about what was in that bullying bill. So it did get passed but it did not get passed with my vote, and did not get passed with the Republican votes at all. This was a project of the Democrat[sic] left. There were a couple of Democrats that voted against it. Most of them voted for it. A complete usurpation of the rights of parents to have input into the policies that their local schools adopt and I think there was — as you mentioned — I think there is an agenda. It was put out as a sort of a pro-gay rights kind of approach and as I said the devil is always in the details. How do you define a bullying behavior? If you define bullying to be if somebody does something to me that I don’t like, that’s a pretty broad approach and you are going to get yourself in a lot of trouble.

Here’s the audio of the portions of the interview with Hann that mention the Safe and Supportive Minnesota Schools Act: