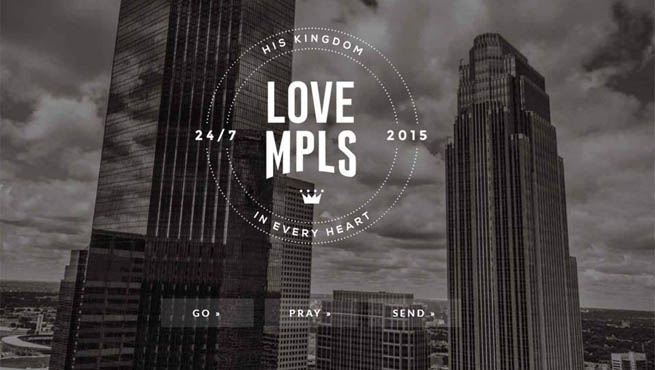 Trinity Works, an evangelical group that infiltrated Twin Cities Pride in 2014, reprised its efforts in 2015.

After training its members at a “Messenger Boot Camp” where they learned how to cast out demons and perform miraculous “healings,” Trinity Works launched Love Minneapolis, week of evangelical outreach across Minneapolis.

The group targeted 20 areas of Minneapolis, three of which were labeled as LGBT “strongholds.” On Sunday, the group directed all of its efforts at the Twin Cities Pride Parade and Festival. The group even moved its base of operations from Brooklyn Park’s Northbrook Alliance Church to North Central University in Elliot Park on Sunday, one mile from the Pride Parade on Hennepin Avenue and the Pride Festival in Loring Park.

Trinity Works employed what they called “glam teams.” These teams each wore solid color shirts from each color of the rainbow. They pushed shopping carts and handed out fruit along the parade route. The red glam team handed out apples, the blue team blueberries, the yellow team bananas. Glam team members also asked parade attendees if they would like to have glitter sprayed on their bodies. Trinity Works used the glitter to mark people for evangelizing later in the day after the parade. The group was also handing out a CD with anti-LGBT messages to members of the LGBT community they deemed receptive to their message. In an email to volunteers just before Pride weekend, the group wrote:

Last year, Trinity Works’ members engaged in similar tactics. The group set up an event in a church parking lot along the parade route and handed out roasted corn and water to parade goers. In order to access the corn and water, people had to enter the parking lot and “share their story.” Once inside, members of the LGBT community were subjected to evangelization that included threats of eternal torment. The “corn feed” was not marked as an evangelical effort, and was built with slick signage to blend in with other Pride activities. The workers engaging parade spectators refused repeatedly to identify their affiliation with Trinity Works. According to witnesses and OutFront Minnesota’s anti-violence team members, many people left the corn feed in tears after unexpectedly being evangelized to.

This year, many of the “messengers” who fanned out across Minneapolis were either “former homosexuals” themselves or attempted to talk members of the LGBT community out of their “lifestyle” and to convert to conservative Christianity. Some gangs of evangelicals preached to captive audiences on Metro Transit trains, while others went into LGBT bars and clubs to befriend members of the LGBT community. Trinity Works posted multiple videos from the week. The Column has generated a summary of those:

Trinity Works leadership and volunteers did not respond to numerous requests for comment both before the events and after. The group’s leader, Steven Uggen initially requested a meeting with The Column to “talk about his heart for the LGBT community,” but when The Column requested that meeting be on the record, Uggen stopped responding to emails and phone calls.

However, operations worker Mark Schultz did appear on religious right radio to talk about Love Minneapolis and efforts to evangelize the LGBT community. On AM 980 KKMS on Wednesday, Schultz alluded to the effort to hand out fruit and glitter as a type of kindness which opened the door to sharing the gospel:

“As we witnessed to the LGBT community, we’re not coming out with a message of judgment. It’s, you know… we want to proclaim the truth and not be shy about what God’s word says but we really want to come in a message of love and recognize that we all come with sin, we all come with baggage, and our goal really is to just love on people. And that’s what this week was about is loving on people and that by seeing love and kindness that people will then be willing to hear gospel message or to read it something that was left behind for them to consider or to receive prayer.”

Trinity Works claimed that more than 240 churches were involved comprising 1,500 workers and that 121 people were saved and 50 were miraculously “healed.” In a post on Facebook, the group wrote:

1500 workers from 240+ churches came together for 168 hours of worship, prayer and outreach. over the course of only seven days, 10,302 people were engaged by gospel messengers. 1,417 of them received prayer for a revelation of Jesus. 1,236 people heard a complete gospel presentation or testimony of the truth of the gospel. 4,095 people received gospel materials to read or listen to after the encounter they had with a messenger. 121 people surrendered their lives to Jesus for the first time or recommitted their lives to Him and 50 experienced partial or complete physical healing.

On the blog “Suburban Christianity,” one of Trinity Works’ workers described the outreach to members of the LGBT community on Sunday.

“Love Minneapolis finished this past Sunday, coinciding with the Gay Pride festival in Minneapolis,” the anonymous author wrote. “I first met and chatted w/ Neal. He was here from out of town, and turns out he was in recovery. He was trying to get clean from meth and shared some deep personal history with me. He allowed me to share the Gospel and my testimony with him, and took a Bible. We prayed together for the Holy Spirit to guide his recovery and lead him into truth.”

Another Pride-goer recognized the author as an evangelical and told them to get lost: “One person found out I was a Christian and became verbally abusive quickly. We were having a nice conversation about life, and I asked if I could share 1 thing before he left. “it’s not going to be any of that Christian bullshit, is it?” “Well, it is a scripture”, I replied. At this, he became enraged, shouting obscenities and cursing me. I felt so bad for him…he must be so wounded. All I could do was walk away and pray.”

The anonymous author concluded, “Overall, my heart was very grieved at this event. There is so much brokeness, hurt and pain. I really don’t have much else to say about it, other than I am grieved and processing what I saw.”

OutFront Minnesota’s anti-violence program fanned out during Pride to interrupt Trinity Works evangelicals from engaging with members of the LGBT community, and Twin Cities Pride security was on high alert. No major incidents were reported.

Leading up to the last two Twin Cities Pride events, Trinity Works said in sermons and program materials that it spent five years undercover at LGBT events and in LGBT bars and clubs. The group said it was learning the most effective ways to convert the LGBT community.

Uggen also blamed the same factors that the “ex-gay” movement often brings up: childhood sexual abuse or poor relationships with a parents,

He also said bullying can cause someone to become LGBT. “Trying to say your different, you’re weird, you know, your gay, you’re a lesbian, you’re a dyke. They begin to literally prophesy over them and that person begins to accept those labels over themselves and come into agreement with the enemy’s lies.”

And heterosexuals who have a relationship fail can become homosexual. “Rejection by opposite sex partners whether a girlfriend that you were in a deep relationship with or even a spouse. We’ve come across numerous stories of people who were married and then when their spouse left them for another person the severity of the rejection actually caused them to go off and experiment in the same-sex community.”

Experimentation with the “lifestyle” is how demons invade. “When you open yourself up to homosexual sex, you are actually opening the door to demonic spirits to come and strengthen that identity. So, you can start off as experimentation — in fact, often times, it does and then it leads into full blown gender identity. I’m gay. I’m same-sex attracted. Because now you have demons on the inside telling you that what you are.”

Trinity Works did not respond to questions regarding any plans to evangelize in 2016, but it is bringing its efforts to New York City in October.