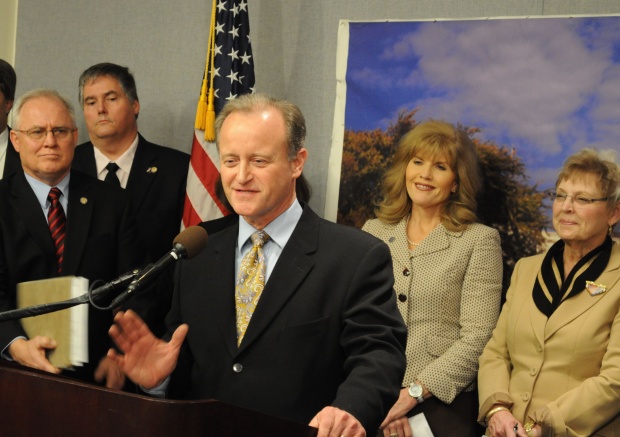 In a lengthy interview on Thursday, Sen. Warren Limmer, Rep. Abigail Whelan, and AM 980 KKMS radio host Paul Ridgeway explained why the trio are pushing for a bill that would bar transgender youth from using school facilities that match their gender and repeal gender-inclusive policies in Minnesota schools. All three said the bill, dubbed the “Bathroom Bill,” will be a major issue in the 2016 legislative session.

Limmer, a Republican from Maple Grove, followed up on remarks by Rep. Whelan, a Republican from Anoka, and Ridgeway who criticized Caitlyn Jenner, who came out as a transgender woman in May. Limmer made a bizarre claim as to why the “Bathroom Bill” is necessary:

Limmer: You brought up Bruce Jenner going through his change surgically, and when you interview him, he’s says, ‘Yes. I’m glad I’m now a quote-unquote woman but I still have the yearnings for women!’ And so think of that type of person, a young person who wants to play on a girls team because he thinks he is more likely going to be a woman in the future and he’s now going to share a locker room.
Ridgeway: Or a shower.
Limmer: On a girls team and if Bruce Jenner still has yearnings for women… so would that young man who thinks he’s a girl in a girls’ locker room…
Ridgeway: Yeah the thing is actually, it’s not only crazy, it’s diabolical.

Earlier in the interview, the three speakers propagated myths about the transgender community. Including a statement by Whelan that somehow being transgender is contagious:

Ridgeway: Sen. Limmer, I don’t know, but transgender… the whole High School League mess, and by the way the whole transgender thing is just steamrolling around the country and the world, you know? You can already see and I don’t say this lightly, and I was talking to Dr. Marcus Bachmann on our clergy cruise yesterday in the St. Croix. Satan knows his time is short. These things are passing everywhere you know? But your thoughts Senator on transgender and the whole transgender mess.
Limmer: My advice to anyone listening is: If you are not involved in trying to define what is happening on the transgender issue, and how it’s being forced on your children and being forced on society, you will be very soon. And the reason I say that is just in Minnesota the State High School League last fall changed their rules and said that if any child — now think of this — a child who thinks that they may be a different gender than they actually were born can play… Let’s say a boy that thinks he’s a girl can play on a girls team. Now that’s in violation of all the rules, on mixing sexes of kids on teams because obviously boys are a little heavier they are a little more muscularity in it. That doesn’t change if you think you are a girl, it just means that you are now allowed to play on girls teams. If you think…
Ridgeway: What about showering because I mean right now at Harvard, a woman who was given a swimming scholarship has just said she’s a boy and she’s having sex treatment and she’s going to be swimming with the boys and showering with the boys, and folks? There’s something wrong here, am I missing it? Rep. Whelan, your thoughts.
Whelan: I worked pretty closely with the chief author of the bill in the House that would have addressed this issue, and we did actually end up passing it as an amendment onto the education omnibus bill. Now, unfortunately it was stripped out during conference committee as an amendment. The reason for me this issue is so important is, number one, a safety issue. It’s a safety issue, for young people… I actually think that Sen. [Michelle] Benson, one of our colleagues in the Senate, Benson said it very well when they were debating this. You know, you have two kids who are going to school together from kindergarten. Now, maybe they are 10 years old and one’s a boy and one’s a girl and we’ll say one of them says, ‘You know what? I no longer feel like a boy. I want to be a girl. Well, now this little girl who was with this child for you know 5 to 6 years is going to the bathroom with him and unfortunately, you know, that girl goes home and says, ‘Mom, dad, I don’t understand’ You know, ‘so and so was a boy and is now a girl, like am I still a girl or am I a boy now? You as a parent have to deal with that and it just… unfortunately it raises a lot of scary questions.

After a commercial break, Ridgeway, Limmer, and Whelan continued their conversation which included Whelan making the inaccurate statement that having gender confirmation procedures results in higher suicide rates for transgender people. Whelan’s information appears to come from the writings of Dr. Paul McHugh, an anti-LGBT activist whose career was at Johns Hopkins University. Author Mari Brighe’s “Clinging to a dangerous past: Dr Paul McHugh’s selective reading of transgender medical literature” tells the tale of how McHugh distorted research for an anti-transgender agenda.

Whelan: I know, that brings me back to the the transgender issue real quick. I just wanted to mention, you know, when we look at this issue, the long term effects for example of a transgender operation, when they do studies on it, the suicide rates for those folks increases 20 times and we’re not just talking about these individuals. This will affect taxpayers at some point. They are talking about having taxpayer funded transgender surgeries, taxpayer funded hormone suppression therapy for kids, and they don’t even know the long terms effects of that. But one of the things is if you are a young person, you might become infertile by going through some of these things. So when we are talking about, you know, what Sen. Limmer brought up earlier with the sports teams and bathrooms in schools, it really is a lot broader… We want to get to this issue so it doesn’t keep going but if we don’t it will keep going and see, you know, we need to be praying about this for sure.
Ridgeway: Well, let me just say this too. One of my atheist friend who listens laughed at me, but a pro-gay leader said this whole transgender thing is just the beginning. ‘We have a whole plan’ and everybody was ‘Oh that’s not really, the gays don’t really have a plan.’ Well, yes they do.
Whelan: Mmm hmm.
Ridgeway: And it’s far more and I tell you folks, Johns Hopkins University, which led the sex change in 1960s stopped doing it not only because the suicide rate, they realized this was a psychological problem both physical and mental, the men who became women and the women who became men, were still women and they were still men and this is crazy and I see Satan now bringing Bruce Jenner in his timing you know but it’s still a man and still a woman. God made two types of people but it’s certainly a psychological problem.

Ridgeway asked Whelan and Limmer what the top issues were going to be in the 2016 legislative session slated to begin in March:

Whelan: For me personally, it will be the transgender issue and I am very very hopeful, and I want to, again, just do a call to prayer for this issue that we can get some positive legislation passed.
Ridgeway: I want to just reiterate what Rep. Whelan just said. She asks for prayer. You know we’ve been praying as listeners. One thing God laid on my heart about 3 or 4 weeks ago, he says ‘Paul, you can motivate and you can call up prayer for your listeners to come to my throne and pray,’ so will you pray for the legislature and for Rep. Whelan and Sen. Limmer and others that are godly but that they will take on the issues and they’ll get favor at the legislature for those godly issues. Thank you. And Sen. Limmer your thoughts real quick?
Limmer: Well, I think we are only going to have a two and a half month session. It’s going to be very fast. It’s going to start March 8… Late. We are remodeling the Capitol, so we need to push that a little bit, but the three big issues that I see: that transgender issue is certainly going to be there front and center in the Senate as it is going to be in the House.


The Column is a community-supported non-profit news, arts, and media organization. We depend on community support to continue the work of solid LGBT-centric journalism. If you like this article, consider visiting Give MN to make a contribution today.