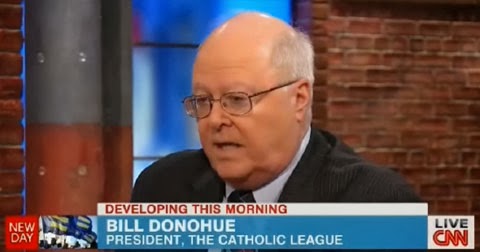 The Catholic League’s Bill Donahue lashed out at the media and claimed that child abusing priests are all “homosexual” in a statement defending former Archbishop John Nienstedt. Nienstedt resigned after intense pressure following new of criminal charges against the Archdiocese of St. Paul and Minneapolis alleging the instituion failed to protect children from sexual abuse. Here’s Donahue’s entire statement titled “ANOTHER COVER-UP OF GAY ABUSERS”:

Both the New York Times and AP reported today that Archbishop Nienstedt protected a pedophile priest, Curtis Wehmeyer. But Wehmeyer is not a pedophile: as with almost all molesting priests—more than 80 percent of them—he is a homosexual.
In 2010, Wehmeyer molested two postpubescent boys, 12 and 14, though it wasn’t until 2012 that the mother of the abused boys told a priest about it. She was told to call the cops. She did. Wehmeyer was immediately relieved of his duties, and the Ramsey County Attorney commended Archbishop Nienstedt for doing “the right thing.”
It was Nienstedt who got the priest removed. Under his predecessor, Archbishop Harry Flynn, Wehmeyer made sexually suggestive remarks to two men, 19 and 20; he was sent for counseling. Two year later, while Flynn was still in charge, he was found cruising in an area known for gay sex. In 2009, with Nienstedt at the helm, he got a DUI. If Nienstedt made one mistake, it was not dumping Wehmeyer sooner.
Ever since Nienstedt criticized the gay movie, “Brokeback Mountain,” he has been a marked man. The Star Tribune, the St. Cloud Times, Minnesota Public Radio, the New York Times, as well as an array of wayward priests, Catholic journalists, former Catholics, and unethical lawyers, have been out to get him. Just today, Fr. Mike Tegeder said it was a good sign that Nienstedt resigned; Tegeder supports gay marriage.
Nienstedt’s sin is that he is an orthodox Catholic. How do I know? When Nienstedt took over the Diocese of New Ulm in 2001, he made public the names of eight priests who were credibly accused of molesting minors, only one of whom was there when Nienstedt took over. He did what his predecessor, Bishop Raymond Lucker, would not do. Lucker was loved by Nienstedt’s critics. Similarly, when Nienstedt took over from Flynn, he had to deal with two molesting gay priests.
Nienstedt was twice accused of inappropriate touching, and twice the charges proved false. He is a good man who was unfairly treated.