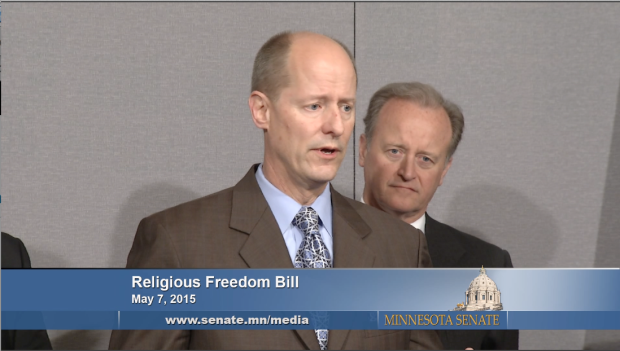 Late last week, a group of Republican Senators submitted a bill that would allow discrimination against same-sex couples. SF 2158 would allow government employees, small business owners, and religious entities to refuse service to same-sex couples planning a wedding. Though much more narrow in scope, the bill has sparked comparisons to Indiana’s ill-fated “religious freedom” bill.

“I am disappointed that Senate Republicans are distracting Minnesotans with divisive social issues,” Hayden said. “At a time when we should be focused on resolving our significant budget differences, Republicans want to focus on harmful legislation that will hurt Minnesota families. I don’t believe we should be moving backwards when we have made it clear we support full equality for all Minnesotans”

OutFront Minnesota, in an email to supporters criticized the bill:

This is yet another sign that opponents of equity for LGBTQ people will not stop in their efforts to make discrimination law, and that they will push hard next year, when the entire Minnesota Legislature is up for election.

“Despite what happened in Indiana recently, our opponents are continuing their attempts to roll back gains we’ve made for LGBTQ equality.” says Executive Director Monica Meyer. “Minnesotans are rightfully proud of our state as a leader in eliminating discrimination, and this bill would take us in the wrong direction.”

Sen. Scott Dibble, who helped shepherd marriage equality through the Minnesota Legislature in 2013, was sharply critical of the bill. The Star Tribune notes:

Sen. Scott Dibble, DFL-Minneapolis, said he’s not overly concerned about the bill, but called it an “unfortunate distraction” as the session wraps up.

“When you offer services to the public, you offer them to everyone,” Dibble said. “I don’t know why we would give some businesses the ability to thumb their nose at the law and treat people differently.”

When did gay-hating bakers become the Rosa Parks of curmudgeons clinging to the past? Was there a memo that went out? Did a convention of bakers pass a resolution or something? Do gay-hating bakers have conventions? Clearly they have a PR firm, because Holy Jeebus are they getting their story out there. Whoever your agent is, gay-hating bakers, hats off to her. She is working her ass off.
Baking cakes never seemed to me the butchest of professions, but ok.
Oh, and for the record – I don’t want any of your hatecake.

Sally Jo Sorensen of Bluestem Prairie posits that the bill, along with anti-transgender legislation, could be more campaign issue-making than policy-making:

Minnesota Senate Republicans are introducing a bill to allow small businesses to refuse service for same-sex weddings. Coupled with earlier anti-transgender legislation, the move will allow the party’s state house and senate candidates in rural swing districts to campaign on one of 2014’s winning messages: anti-equality.

Given the absence of any statewide race and the relative unpopularity of Hillary Clinton in Greater Minnesota, the strategy will allow Republican candidates and the social conservative groups who love them (the Freedom Club comes to mind) to run relatively subdued anti-LGBTQ campaigns, while the Minnesota Jobs Coalition, Minnesota Action Network and their kindred pound vulnerable rural senators on the new Senate Office Building, a $100,000 campaign finance violation by the DFL Senate Caucus campaign committee and other such Sins of Bakk.

The Republican Party won’t have to worry about its weak statewide candidates; instead, the party and its IE allies can focus on corruption and economic issues in retail races, while the candidates in those races in deep social conservative rural districts can go door-to-door about hating on the gay and excluding transgender kids. The bills aren’t for the floor; they’re for the doors outside the metro (it’s a different ground game in the first-tier suburbs).

On the other side, the Minnesota Family Council touted the bill on Facebook:

Sen. Paul Gazelka, who won MFC’s “Champion of the Family” award last year for his prayerful work in tirelessly trying to explain the importance of‪#‎religiousfreedom‬ to folks on all sides of the aisle and even LGBT activist groups, introduced a bill he believes will be a compromise to both sides.
The bill doesn’t try to stop gay marriage and doesn’t stop gay couples from accessing wedding services, but it DOES also recognize that business owners of faith have religious freedom rights too. No one should have to give up their faith in order to earn a living.
Sadly, it looks like our state’s leading LGBT activist group isn’t interested in a compromise or “live and let live” approach for both sides in this issue, at this point.

Sen. Paul Gazelka, the bill’s author, did a media tour talking about the bill. He appeared on John Williams on WCCO. Williams was sharply critical:

I can’t imagine that he took many calls in his office saying boy we’ve got to get this done, Paul we got to get this fixed?
who in the world wants this done. It was such a disaster for Indiana, never mind the financial, it was just an embarrassment for Indiana. Why would Minnesota want to go down this road unless people are pounding on his door, being forced to sell flowers to same-sex couples and it’s a violation of their religious beliefs, I mean really? Has one person raised their hand in Nisswa to say that. I’d be shocked. I’d be shocked.

Gazelka called in to Williams’ show to explain his bill:

I wanted you to give the genesis for how it came about you know because it wasn’t just a knee jerk. There was a constituent in my district, a catholic family that owned a small business and two men wanted to marry on their private property where they have their business and they believe that gay marriage is morally wrong and so they didn’t want to celebrate that marriage with them. He told me ‘Personally, I don’t’ have a problem with people doing whatever they want to do that’s their business’… but it became more difficult when it was actually something he had to participate with.
Williams: Why would they have to if it’s private property…
Gazelka: Because it’s a business.
Williams: They can’t legally refuse to rent their property to someone for any reason at all?
Gazelka: I don’t think so. That’s the rub. So what we are simply saying is you don’t have to participate in a same-sex wedding and that’s where the rub is. Anybody that decides not to serve somebody because of any reason being gay is discrimination and I would stand with them and I would be opposed to that kind of behavior but this is more about for a large number of people that traditionally have a Christian viewpoint, Orthodox Jews, or Muslims. They don’t want to participate. It’s only selected businesses. It’s really more like a photographer that is asked to do it…flowers and set them all up for the ceremony it’s such a sacred ceremony for many that’s where they draw the line and so I’ve reached out to the gay community a number of times. I will continue to do that to say is there a place to find common ground where both sides can live as they please and I don’t know if I found it yet but I feel like its worth the effort.

Gazelka also did a lengthy interview with Chad Hartman on WCCO and on the conservative Up and At ‘Em an AM 1130.