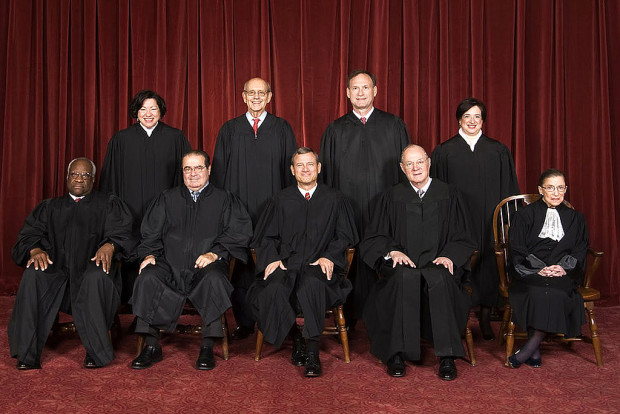 On Tuesday, The Washington Post’s Wonkblog led with the title “No, gay marriage will not cause 900,000 abortions.” Writer Christopher Ingraham was responding to an amicus brief filed at the U.S. Supreme Court by “100 Scholars of Marriage.” These scholars lay out the argument that if the Supreme Court rules in favor of marriage equality, then less people will marry, more women will have children “out of wedlock” and that will result in more abortions.

Fewer opposite-sex marriages means more unmarried women, more children born to unmarried mothers, fewer total children born, and more children aborted. Specifically, under conservative assumptions, a mere five percent reduction in opposite-sex marriage rates would result in nearly 600,000 more children being born to unmarried women. See Appendix B. That would lead to increases in the percentage of children living in poverty, experiencing psychological or emotional problems, suffering from teenage pregnancy, doing poorly in school, engaging in substance abuse, committing crimes, and obtaining abortions— all with adverse impacts on society. See supra at IIA. Additionally, again under conservative assumptions and over the next 30 years, this would lead not only to hundreds of thousands fewer births, but also to nearly 900,000 more abortions.

The faulty logic in the brief has become fodder for the media. The Washington Post’s “The new argument against gay equality: Same-sex marriage kills,” Dana Milbank wrote: “The logic is about as obvious as if they had alleged that raising the minimum wage would increase the frequency of hurricanes. If anything, you’d think that more same-sex marriages would mean more adoptions.”

Forgive the cynicism but it seems that any attempt to link an increase in the number of abortions to a judicial decision expanding the definition of marriage from what it has been for at least the almost 250 years of this constitutional republic’s existence is an act of political desperation at the eleventh hour. Someone apparently believes that if the political power of the pro-life movement, which is considerable, could be activated then what is an almost certain outcome before the Supreme Court could somehow be upended. To call this merely disrespectful would be charitable.

Dr. Olson’s has a long history of anti-LGBT activism as the board chair of Outpost Ministries, an “ex-gay” group that has operated in Minnesota since the 1970s.

Other Minnesota-based individuals and organizations are appealing to the court not to rule in favor of marriage equality. The Minnesota Family Council signed onto a brief along with dozens of other members of the Family Policy Councils. These conservative Christian councils were first organized by Focus on the Family and now exist under the umbrella of CitizenLink, another Focus on the Family creation.

That brief argued that same-sex marriage should not be legalized because they need a mother and a father:

Only a marriage between a man and a woman is capable of producing biological children of both spouses, creating a family of father, mother, and child. Bostic, 760 F.3d at 391 (Niemeyer, J., dissenting). While not all marriages between a man and a woman will produce biological children, they all provide the potential for a child that enters those homes, either through natural conception, assisted reproduction, or adoption, to have the benefit of being raised by both a father and a mother. Popular culture has seen drastic changes in recent times. Yet the needs of children remain surprisingly constant, and the presence of both a mother and a father in the home continues to provide them with unique and irreplaceable benefits. Given the significant evidence demonstrating that homes with both a mother and a father have the highest probability of optimal results for children, a state has a rational and even compelling basis for preferring this childrearing arrangement by continuing to recognize as marriages only those unions comprised of one man and one woman.

A third brief filed by Minnesotans argues that the Supreme Court should not pay any respect to professional organizations like the American Psychiatric Association or American Medical Association because they once believed that homosexuality was a mental illness, but changed that position based on political pressure rather than scientific rigor.

The brief was filed by the Northstar Law and Policy Center, a Minnesota based alliance of attorneys opposed to same-sex marriage. (The Institute for Marriage and Public Policy, founded by Maggie Gallagher, also signed on to the brief). University of Thomas Law Prof. Teresa Collett wrote the brief. Collett is a long-time opponent of LGBT rights in Minnesota.

The research [American Psychiatric Association, et. al] offer cannot possibly confirm that the effects of same-sex marriage will be harmless or beneficial. The scientific evidence cited to support this change in social policy is manifestly inconclusive, and there is no good reason to give it any weight at all. The social and behavioral scientists who make rosy predictions are using their academic credentials to advance a policy they prefer for reasons outside their fields of expertise. This case can and should be resolved on the basis of existing law, which should not be altered in response to advocacy posing as science.