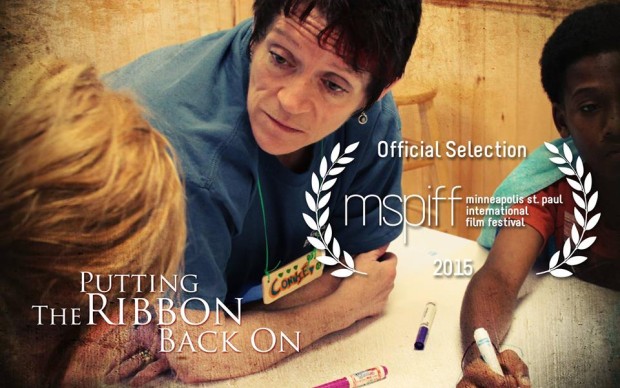 A short documentary (a project of The Column) has been admitted to three film festivals this spring, including the Minneapolis-St. Paul International Film Festival on Sunday, April 12.

Putting the Ribbon Back On is a project of filmmaker Richard Louprasong and myself. We came up with the idea while we were on a photo shoot for Face Off HIV, another great project being produced for The Column. FOH features the stunning photography of local talent Ryan Coit, and presents the real lives of Minnesotans living with HIV.  Both of these young gay men (Richard and Ryan) show such promise and compassion in their work which often examines racial divides, societal discrepancies, and stereotypes.

On assignment in northern Minnesota shooting a video for FOH, Richard learned of Connie Statz, then Director of Camp Benedict. Statz story moved both Richard and myself, and we committed to putting her inspirational story into a documentary film: “Putting The Ribbon Back On.”

Richard and I trekked up to Brainerd for the Camp Benedict annual fundraiser and dinner to begin shooting the documentary about this very unique camp for people living with HIV/AIDS and their families. It was there that we learned the real story of a woman who has so many people that appreciate and adore her work.

Connie Statz, featured in both the book and the documentary, is a heterosexual mother that contracted HIV through a blood transfusion years ago (before blood and fluid screening was mandatory). Camp Benedict has become a second home for Connie. After arriving a camp we quickly observed her interactions with everyone and realized this quiet tour de force greeted everyone as family and welcomed them into the loving fold of a four day experience intended to support, educate, and refresh the energies of the participants.

Over the course of the past few years, Richard has crafted those beautiful moments turning these stories into a documentary that is now being accepted into film festivals around country. On April 12, the film will have its Twin Cities premier at the Minneapolis/St. Paul International Film Festival (check out the Facebook event for more information and updates).

With acceptance at the online 2015 Make A Difference For Reel Film Festival, and the SENE Film & Music Festival 2015 in Rhode Island, the film will now provide inspiration and hope to others in need of acceptance. The hope and dream of Connie and Camp Benedict is that this will encourage others to create their own camps and expand the vision of Camp Benedict.

The official trailer can be viewed here:

Both Face Off HIV and Putting The Ribbon Back On were adopted as “projects” of The Column in early 2014. Congratulations to Connie, Richard and the team behind this important documentary!