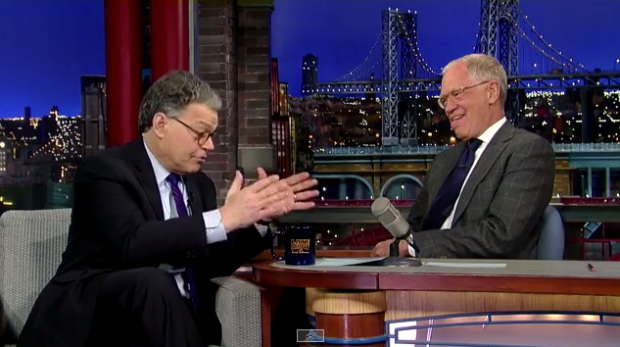 On Wednesday night’s Late Show with David Letterman, Sen. Al Franken said goodbye to his friend who is leaving the show in May. Letterman, who is from Indiana, and Franken discussed the “religious freedom” bill signed into law there in late-March.

“What’s gong on with the governor of my state?” Letterman asked Franken.

Franken responded: “This was a very bad move I thought… the problem here is that LGBT Americans, lesbian, gay, bisexual, transgender Americans don’t have the same rights that pretty much everyone else has. So you can’t discriminate against someone in employment because they are Black or because they are Jewish, but you can in many states because they are LGBT. And we’ve got to end that and we need a national law saying you can’t do that.”

Franken also gave a plug for his Student Non-Discrimination Act which would add protections from bullying, harassment, and discrimination for LGBT students across the nation.

“If they just changed it to say in Indiana we will not discriminate against any based on their sexual orientation or gender identity, then you could have this, this is supposed to be about restoration of religious freedom,” Franken told Letterman. “I think we’ve made just a tremendous amount of progress on this issue but the final step should really be to give LGBT people the same rights these other groups have by virtue of race and religion and disability and these things, and I think that’s the natural next step and that’s something we should do.”