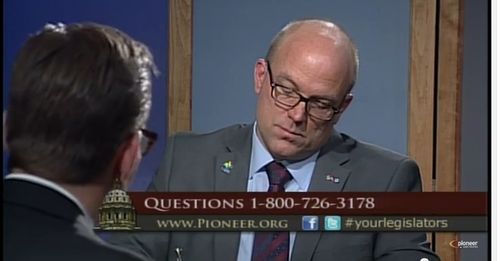 Miller, who included anti-equality statements in his campaign literature and radio ads, is the chief author of HF1546, the anti-transgender bill in the House. Like its Senate companion, Miller’s bill did not receive a committee hearing and so the legislation is unlikely to move forward.

In the clip, Scott Dibble leads off about the bill:

Dibble: The State High School League went through a fairly lengthy multi-year deliberative process, worked with lots of lots of stakeholders, worked with parents, worked with school board members, worked with the affected communities, the transgender communities, the student athletes, to find a way that transgender students could find a way to participate in athletics, a very very important part of educational and school experience . . .to figure out a way to do that in a way that makes sense and really provided some good guidance and allows school districts to work with their own communities and figure out what works best.

You know, there’s concern about . . .who should be able to participate on particular teams and then of course there are concerns about privacy in bathrooms and locker rooms and that sort of thing. And you know, they figured it out and made a pretty good policy.

What this bill would do would completely overturn that, create the one-size-fits-all, misrepresent exactly who and what transgender people are, define them in the law. This bill was developed without any consultation or conversation with the transgender community or the LGBT community and purports to dictate and define who people are . . .without any scientific evidence.

It just says, a boy is born as a boy and a girl is born as a girl, and that’s just not who and what transgender people are. I think we’ve got a really good policy, it was very difficult, lots different perspectives were taken under consideration and to come in as the legislature and just completely turn that over is wrong minded.

It really puts a lot of pressure and shows a lot of disrespect and makes it even harder to be a transgender student in our schools and I just think it’s not appropriate. It’s not going to go anywhere in the Senate.

As The Column reported in MN Senate rejects efforts to fast-track anti-transgender bill, a motion to suspend the rules and bring the senate version of the bill to the floor failed earlier in March.

Dibble, a gay man married eight years to his husband, has been a champion for human rights in the Minnesota legislature; he was the Senate author of Minnesota’s marriage equality law and Safe Schools anti-bullying law.

After confirming with Dibble that the bill won’t be passed in the Senate, Anderson turns to Miller, who says:

. . .I’m the lightning rod on this, because it’s actually my bill.

Anderson: I should have started with you. . .

Miller: . . .There was a lot of things that Senator Dibble said and I’m not so much going to try and respond to them, so I apologize because there’s just a lot of little bits and pieces but I hopefully can address some of the concerns he has.

My bill is really intended to do one thing. I believe . . .that the Minnesota High School League steps outside what their authority is. They did some things that the legislature should be doing and they made some determinations that are actually, if anything, against some current Minnesota state law. So what this bill and this bill was very carefully crafted, spent a lot of time trying to craft this so that we don’t hold anyone in harm.

There’s no one we’re excluding out on this. All’s it basically does is it has two parts. It says, number one–and it does define it as biological boys and biological girls throughout–that boys will not play on girls sports teams and when it comes to bathrooms, locker rooms or other place where there’s a state of undress or privacy issues, that boys and girls biologically with dress and convene in their individual places.

And it also has a portion where it does address transgenders, where there’s people who feel that they don’t fit that definition, the schools are called on to accommodate those situations. So there’s no one who’s being excluded in this. There is no one who’s being held out as being different or anything like that.

This is a way that we can have some order in our schools, which I think that most people can agree that schools need to have some structure and order. I believe that the Minnesota State High School League did something that actually more problems for our schools than they solved.

Next, Rep. Paul Marquart jumps in:

Marquart: You know, like a lot of social issues, times come and then you have to make some decisions and so forth. The Minnesota State High School League looked at this very thoroughly. They copied a lot of what they do in college–I think a lot of it was . . .

Miller, interrupting: No, that’s not true.. .

Marquart: . .. but I don’t think that the what we should be doing is overseeing what the Minnesota State High School League does. So–are we going to set up new competitive districts? Are we going to decide how long basketball games are? Or those sorts of things?

I have not had one athletic director come to me and say I disagree with what the Minnesota State High School League did. I —

Miller, interupting: And I’ve had several.

Marquart, laughing: I haven’t had one and so I think it might be in the eye of the beholder sometimes, but I just don’t think it’s right for the legislature to start dictating what the Minnesota State High School League does as far as activities, and again, I haven’t heard from any of my local districts on this issue and I wouldn’t support a bill that would accomplish that.

Dahms: I hope that we don’t minimize this to the point where we’re comparing where our children are showering and going to the bathroom with which sexes are doing that with to the length of a basketball game, so that does concern me, but we’ll move on beyond that.

I do have a concern in the fact that we have a lot of students who aren’t transgender and I don’t want them to feel uncomfortable where they go to the bathroom and shower and things like that neither, so I’ve gotten a lot of phone calls, a lot of emails, and most of it centered around the facilities, the bathroom facilities and the shower facilities and I think that that is a concern, but I certainly don’t want to minimize this to the point that we’re going to look at it like it’s how long a basketball game is and how many minutes people can play. There’s a big difference between that, but . . .in the Senate–

Miller, interrupting: There’s a bit of hypocrisy because last year we passed an anti-bullying law which basically said that even though you currently have bullying policies, we believe that there’s a state interest in putting control and order in our schools in this formal way and now this year it’s hands off on the schools and I don’t understand the logic of how those of . . .

Dibble, interrupting: . . . I can. First of all, the representation of the bullying bill as somehow dictating all of the parameters and policies is a misnomer and a myth that has been perpetuated about the anti-bullying bill for a long time.

It gives tools, it gives minimal expected standards but school districts are directed to craft and create those policies and promulgate them in conversation with their own communities and their own parents, just as the State High School League policy does on transgender students athletes.

And to say that somehow biological boys who are transgender are boys is simply showing a level of misunderstanding and disrespect for the experience of what it is to be transgender. Boys are not clamoring to get into girls’ locker rooms. That is not what is happening here.

Miller, interrupting: How are you aware that I don’t have a relationship?

Dibble: Because you wouldn’t have written the bill in the manner that you did.

Dibble: So i would just say, let’s have a reasoned conversation, not put thing in law that send a singal to these young sons and daughters of Minnesota parents that somehow how they’re less worthy and that they’re something negative.

The discussion moves on to the dueling budgets in the Minnesota House, Senate and Governor Dayton’s office.

The full Your Legislators episode can be viewed online at Pioneer Public Television.