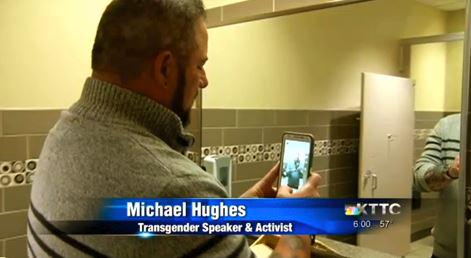 Last week, Brae Carnes from British Columbia Canada, decided to post a selfie of herself in the men’s bathroom as a protest against an amendment to the Canadian Human Rights Act and Criminal Code proposed by Senator Donald Plett. The amendment would basically kill C-279, legislation saying people who are transgender should be afforded the same rights as everyone else.

That simple selfie turned into a campaign that has spread nationally. With bills looming in Minnesota, Kentucky, Texas, and Florida, people who are transgender have taken to the bathrooms to illustrate the ridiculousness of being seen in a facility that does not match their gender.

Posting their selfies to #wejustneedtopee, Michael Hughes, a 45 year old Rochester Minnesota man, inadvertently stepped in something more than he expected when his selfie went viral.

“You wouldn’t believe the messages I’m getting, asking for me to give exclusive photos…from people who can’t even tell me who they work for.” Michael explained to me, “I’m disturbed by people making memes now using my pictures.” He is currently preparing for an interview on MSNBC on Wednesday and took some time out of his busy day to speak with me about the selfie campaign and suddenly gaining national attention after being stealth for so many years.

“It was a bit of a tough decision, I knew I was forever outing myself,” but “I knew I could get at some of these conservatives by showing them a tall bearded man in a women’s bathroom.”

Bathroom bills have become popular since people who are transgender have been in the spotlight through shows like Orange is the New Black, Transparent, Boy Meets Girl and the upcoming reality show starring Jazz Jennings; Republican law makers are responding by creating fear behind the rights of people who are transgender and organizations like the Child Protection League, Minnesota Family Council, the American Family Association and Focus on the Family are fundraising off the fear of “boys using girls” bathrooms, but the paradigm of transmen in women’s facilities has never addressed.

“Regardless of my genitalia – since they like to take it to that level – I don’t think I’m quite what they pictured when they were thinking up this legislation [and] I decided right away to control the situation as much as possible – I didn’t want to encounter women who didn’t know me, and make anyone feel vulnerable I was acutely aware of that.”

Safety is an issue when it comes to these bathroom bills; according to an article in PlanetTransgender, Brae Carnes was followed out to her car after a bathroom photo shoot and propositioned thus illustrating the danger bathroom bills place on people who are transgender.

Michael says, “I have carefully chosen each location, all the women in the photos are friends and/or family and we had one of the women check the bathroom first… someone else guard[ed] the door we’ve never encountered a woman. But I think we’ve chosen carefully. In all three viral selfies, the location was void of customers and we did it right at closing time.”

If these laws were to come to fruition, “I know we’ll see a rise in violence against trans women.” Michael lamented, “That’s one of my main motivators – I’m not concerned for the safety of myself in a women’s bathroom – but I keep thinking of them trying to force women into the men’s room and how dangerous that is.”

Friend requests are pouring in and local residents are offering to take selfies with him, so “overall, the feedback from this has been overwhelmingly positive” however, it has not been 100 percent positive from the trans community. Less than friendly messages ranging from accusing Michael of appropriation of hashtags to diverting the attention away from transwomen to transmen have been creeping into his inbox. “I’m accused of wanting ‘looks’ used to determine who gets to go where and being called out by our own community is very hard to swallow.”

Married for 12 years this month with four children, attending a local university for Sociology and Women & Gender Studies, and cooking diner for his family, Michael’s family and his hometown of Rochester Minnesota, seem to be handling the instant recognition well, “Our youngest had to come out to her friends when this broke…she’s so brave and she was so proud to do it. She brought me cupcakes yesterday because she wanted to celebrate with me!”

“It’s sad that they [legislators] imagine us to be these people that are so removed from normal, yet we’re as normal as the family next door.”